Objective: To evaluate the antibiotic sensitivity and resistance pattern in an intensive care unit (ICU) setting of a tertiary care hospital.

Materials and methods: A cross-sectional, retrospective study was conducted for a period of 1 month in October 2017 on a total of 195 patients who were admitted to ICU of tertiary care hospital. The culture and sensitivity pattern of clinical isolates from blood, urine, sputum, endotracheal tube (ET) aspirate, catheter sites, and wound swabs were analyzed. Positive cultures were segregated and their antibiotic sensitivity testing was performed under the guidelines of clinical and laboratory standard institute (CLSI).

Conclusion: Gram-negative bacterial infections are increasing in ICUs, leading to inappropriate selection of antibiotics. Hence, antibiotic sensitivity and resistance pattern in a hospital setup has to be studied so as to guide the treating consultant to initiate empirical antibiotics in critical cases.

Antibiotics have served as the corner stone of modern medicine. Emergence of antibiotic resistance is a worldwide public health problem and a threat to mankind. 1 In India, the burden of infectious disease is highest among the world; and recent reports showed the inappropriate and irrational use of antimicrobial agents against the diseases led to increase in the development of antimicrobial resistance (AMR). 2 Besides poor financial conditions, inadequate infrastructure, high burden of disease, and unregulated sales of cheap antibiotics have amplified the crisis of AMR in India. 3,4

Bacterial infections are a frequent cause of hospitalization, and particularly nosocomial infections are more common in critical care settings. 5 Globally the emergence of antibiotic resistance and limited availability of treatment options present an increasing challenge for the management of bacterial infections worldwide. Rate of nosocomial infections range from 5% to 30% among ICU patients. The increased risk of infection is associated with severity of patient illness, length of exposure to invasive devices and procedures, increased patient contact with healthcare personnel, and length of stay in hospital. Over the past 15–20 years, infection control practices and new antimicrobial development have primarily targeted control and treatment of infections caused by gram-positive organisms. 6–9 Recently the incidence of infections caused by gram-negative bacteria in ICU has risen, and the lack of available treatment options against some multi-drug-resistant (MDR) strains is alarming. Infections caused by MDR gram-negative organisms are associated with high morbidity and mortality. 10 Hence, careful adherence to infection control and infection treatment guidelines helps to improve patient outcome and reduce hospital cost.

In this study, we analyze the pattern of antibiotic sensitivity and resistance based on the results of various cultures of microbial specimens from admitted patients. Information obtained may be crucial as a reference for pathogen identification and selection of empirical antibiotic therapy in our ICU setup.

Retrospective observational study conducted in a teaching tertiary care hospital during October 2017, a total of 195 adult patients admitted to ICU in this study period were included. Patients in whom cultures were not sent for testing were excluded. Data were collected from MRD of the hospital including patient identity, diagnosis, comorbidities, source of infection, results of microbial culture, antibiotic sensitivity and resistance pattern, antibiotic use, duration of stay in hospital, and clinical outcome. Of the total 195 ICU admissions, cultures were sent for 167 cases, of which 127 patients were culture positive and 40 cases were culture negative. In few cases, culture sample was sent from more than one site based on patient’s clinical requirement. Isolated bacteria were mostly gram-negative organisms like E. coli (18.6%), Acinetobacter (14.5%), Klebsiella (11.6%), Pseudomonas (9.8%), and Proteus (1.74%). Among the gram-positive organisms, CoNS (15.6%) was most commonly isolated followed by Streptococcus (2.32%). Fungal growth was also seen in 26 (15.11%) samples. Specimens on which grew organisms were blood (n = 48), sputum (n = 17), urine (n = 39), ET aspirate (n = 40), pus (n = 11), central venous catheter tip (n = 4), ear swab (n = 2), and stool (n = 1).

During the study period, a total of 195 cases were admitted to the medical ICU, of which 165 cases were sent for culture and sensitivity. A total of 127 cases had growth of organisms, which were tested for sensitivity pattern by standard laboratory methods, remaining 40 cases were culture negative. Among the culture grown cases, 100 samples were gram-negative and 46 were gram-positive organisms and 26 were positive for fungal growth as depicted in Figure 1. 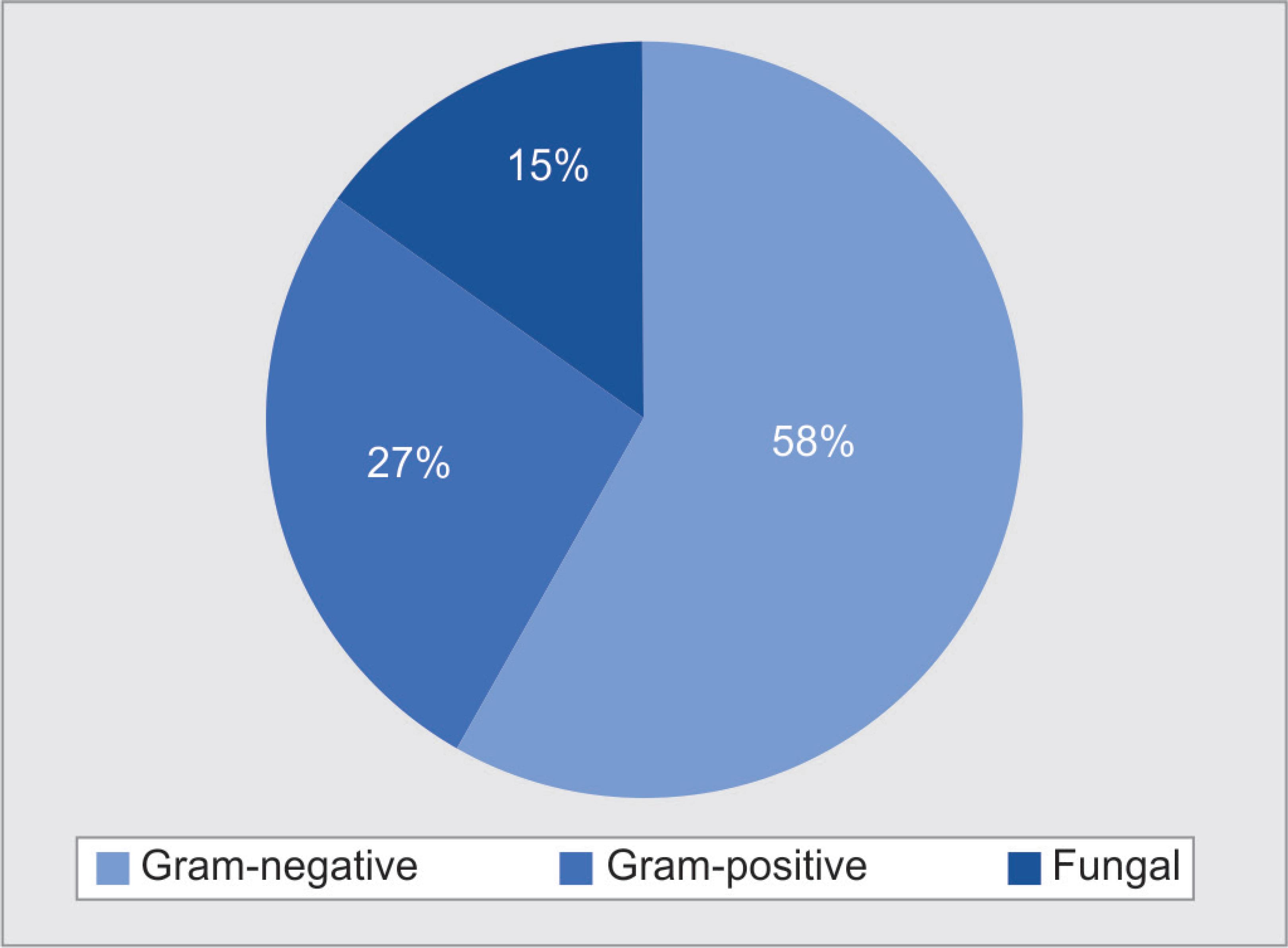 Antibiotic resistance is an emerging problem in critically ill cases, which affects prognosis and survival of the patients. It also results in prolonged stay in hospital, increasing the cost of treatment. 11–13

In Asian countries including India, most of the isolates obtained from ICU patients are gram-negative organisms such as E. coli, Klebsiella, and Acinetobacter followed by gram-positive organisms like Staphylococcus comparable to our study. 15–17

E. coli (41%) was commonly isolated from urine, followed by fungal growth and Acinetobacter. In other studies such as Bajaj et al. 23 and Sheth et al., 24 Klebsiella was commonly isolated from urine culture. Fungal urinary tract infection has become a significant nosocomial problem over the past decade; 21 however, laboratory yield of yeast in urine and its significance may be difficult to differentiate from colonization and infection. 24–27

In our study the most common organisms isolated from patients in ICU were gram-negative isolates such as E. coli, Acinetobacter, Klebsiella, Pseudomonas, and Proteus which showed highest resistance to second- and third-generation cephalosporins followed by piperacillin–tazobactam.

Piperacillin–tazobactam has been the mainstay of empirical antibiotic therapy followed by carbapenems in severely ill ICU patients. Indian guidelines by Indian Council of Medical Research (ICMR) also recommend the use of β-lactam with β-lactamase inhibitor such as piperacillin–tazobactam as empirical antibiotic therapy in critically ill patients. In our study, we observed significantly high resistance to piperacillin and tazobactum, i.e., around 40–80% in both gram-negative and positive infections, in the obtained culture and sensitivity reports.

Carbapenem-resistant Enterobacteriaceae including Klebsiella, E. coli, and Acinetobacter has emerged with increasing prevalence over the past decade, which is also evident in our study where E. coli showed around 68% sensitivity to carbapenems, whereas Acinetobacter showed only 24%, Klebsiella 30–45%, and Pseudomonas 50–55%.

This may be due to the prior antibiotic usage, prior severe gram-negative infections, inappropriate course of antibiotics, and patients coming with severe sepsis and septic shock as ours is a tertiary care hospital.

With the emergence of these multidrug-resistance organisms, older medications such as colistin has been revived. Even in our study, we observed good sensitivity of gram-negative isolates to colistin, where E. coli showed 96.8% sensitivity, Acinetobacter 68%, Klebsiella 70%, and Pseudomonas 47%.

But few pan-drug-resistant isolates were also identified in our study, which were resistant to all drugs including carbapenems, colistin, and minocycline. Emergence of such pan-drug-resistant organisms are threat to mankind and do makes us think what next.

Probably at this stage, a local antibiogram has to be drawn in every ICU setup, at least quarterly, for better clinical decision-making regarding initiation of empirical antibiotics with antibiotic stewardship program, which are beneficial in preventing the emergence of MDR and extremely drug resistant organisms. Most important in this is the use of broad-spectrum empirical antimicrobials with an aggressive de-escalation strategies to minimize collateral damage to current and future patients. Emphasis should also be laid on the use of sterile techniques while inserting devices, hand hygiene and use of gowns and gloves in ICU to prevent nosocomial infections and better patient response and clinical outcome.

Antibiotic resistance is a major upcoming problem in today’s clinical practice, increasing the challenges to treating consultants as well as huge financial burden to patient bystanders. Gram-negative-resistant infections are increasing in our ICU setups, leading to increased morbidity and mortality. Hence, timely antibiogram and antibiotic stewardship programs have to be conducted for a better understanding of the type of organism, their sensitivity and resistance pattern, so as to initiate empirical antibiotics in emergency conditions. Also equal emphasis has to be given for de-escalation of antibiotics whenever indicated, so as to prevent further misuse of antibiotics and increase the resistance of these organisms. Better usage of available drugs lead to better preservation of stores for future generation.