Invasive cryptococcosis is the third most common invasive fungal infection among organ transplant recipients.1 The most frequently encountered clinical manifestation is cryptococcal meningoencephalitis (CM) which may be easily missed because of varying clinical presentations. 1-year mortality is estimated at 20–30% even with long-term consolidated antifungal therapy. Here we report a case of combined pulmonary and cryptococcal meningitis in a renal allograft recipient. This case illustrates the difficulty of estimating the real extent of the disease when only clinical features are considered. The patient presented with nonspecific symptoms. Chest computed tomography (CT) scans revealed multiple pulmonary nodular shadows. The CT-guided biopsy of the pulmonary nodule clinched the diagnosis of pulmonary cryptococcosis (PC). The central nervous system (CNS) cryptococcosis was proved by positive culture and crypto-LA antigen in the cerebrospinal fluid (CSF).

Cryptococcosis is caused by either Cryptococcus neoformans or Cryptococcus gattii.2 Epidemiologically, C. neoformans has a worldwide distribution, while C. gattii is more common in tropical, subtropical, and temperate regions (Australia, South America, Africa, the United States, and Canada). An important distinguishing feature between the two species is the observation that unlike C. neoformans, C. gattii infection spares immunosuppressed individuals.2,3Cryptococcus neoformans is most classically associated with exposure to bird droppings, though the exact relationship between exposure and disease is not clear. The meningitis or meningoencephalitis that follows is thought to result from inhalation of the organism from the environment into the respiratory tract, with hematogenous dissemination to the central nervous system (CNS).

A 38-year-old male patient who underwent kidney transplant 4 years ago was admitted to the hospital because of the generalized weakness and a single episode of fever (39.2°C) with chill. He underwent a live related transplant, the donor being his wife. The indication for transplant was analgesic nephropathy due to nonsteroidal anti-inflammatory drug abuse which the patient was taking for ankylosing spondylitis. After the transplant, he had stable kidney function with the serum creatinine level of 1.1 mg/dL. Immune suppression consisted of tacrolimus 2 mg, mycophenolate mofetil 720 mg, and prednisolone 10 mg daily.

On admission, the patient was conscious and hemodynamically stable. Physical examination revealed no pathological findings and temperature was 36.4°C. Blood test results showed neither leucocytosis nor an elevated procalcitonin level. The tacrolimus trough level was 4.6 ng/mL.

Computed tomography (CT) scan of thorax revealed bilateral nodular lesions, and one nodule in the right lower lobe showed internal necrosis suggestive of infective pathology (Fig. 1). He was started on antibiotics and supportive treatment. The CT-guided biopsy was requested and empirical liposomal amphotericin B was added to the treatment regimen. The biopsy report was suggestive of PC (Figs 2 and 3) and the dose of liposomal amphotericin B was increased to 3 mg/kg. On day 7, he complained of double vision, so magnetic resonance imaging (MRI) of brain and fundoscopy were done. Contrast-enhanced MRI brain showed a calcified granuloma in the frontal lobe and atlantoaxial subluxation. Meningeal enhancement was not evident. Fundoscopy was not suggestive of papilledema. A lumbar puncture was performed. The opening pressure was normal (10 cm H2O), but the cell count in the cerebrospinal fluid (CSF) was 64 × 106/L (70% mononuclear), and glucose (24 mg/dL) and protein (86.9 mg/dL) levels were elevated. Bacterial culture from the CSF remained negative. However, India ink staining revealed a surprisingly high-quantity encapsulated yeast forms in the CSF (Fig. 4). In addition, cryptococcal antigen tests in both CSF and blood were positive. Cryptococcus neoformans grew in cultures from CSF, leading to a diagnosis of cryptococcal meningitis.

After the patient received induction therapy with liposomal amphotericin B 250 mg daily intravenously (cumulative doses 2,800 mg) and fluconazole 400 mg daily intravenously for 3 weeks, a subsequent lumbar puncture detected no fungal growth. Consolidation therapy followed, with fluconazole 400 mg daily for 7 days after which the patient was discharged on oral fluconanzole 400 mg daily to be taken for 24 weeks. Immunosuppression was modified. The dose of tacrolimus was reduced to target a trough levels of 3–5 ng/mL, prednisolone was continued at 10 mg/day, and mycophenolate mofetil was stopped. 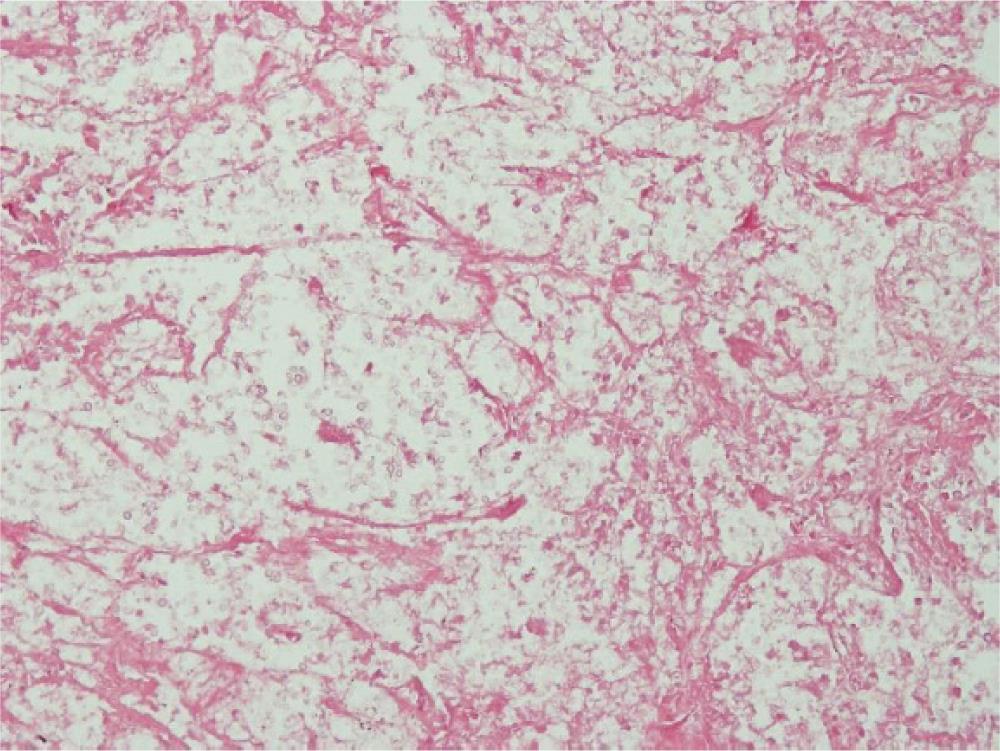 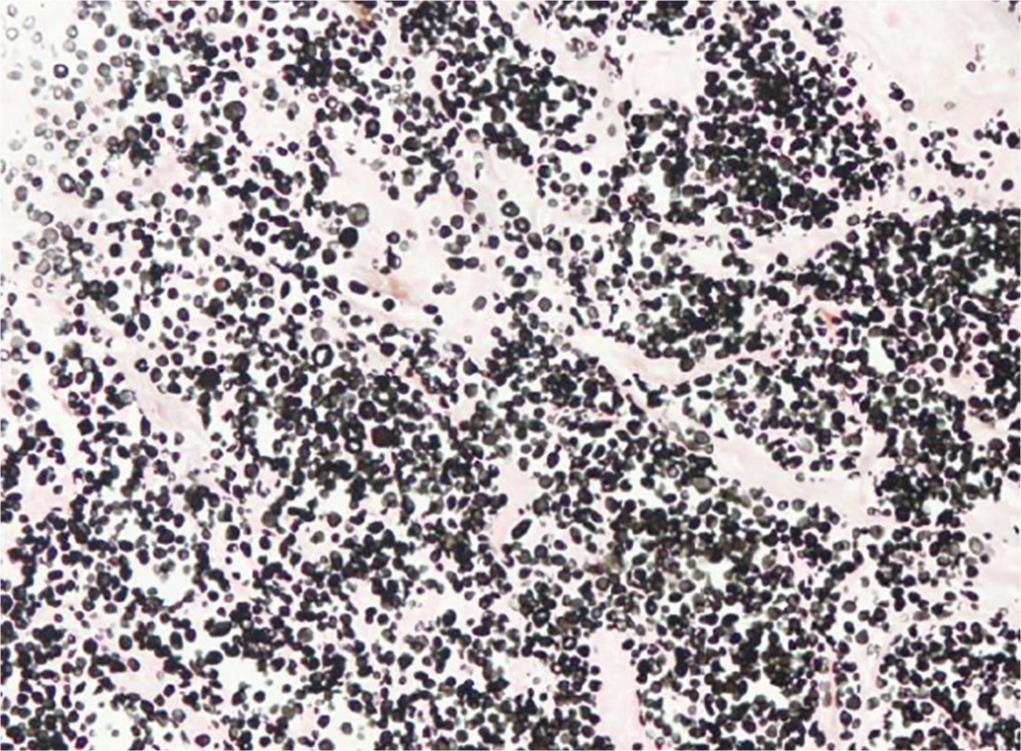 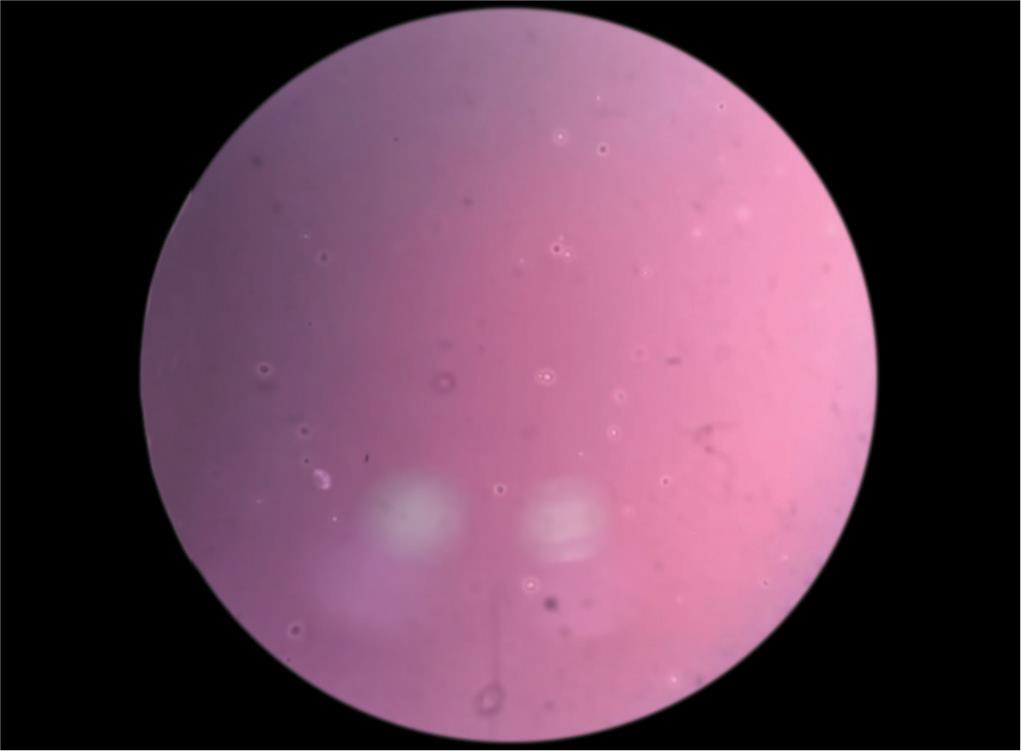 At the last follow-up (3 months after the episode), the patient was in good health.

Infection with C. neoformans in solid organ transplant recipients usually occurs in the late posttransplantation period (>6 months after transplantation).4,5 Susceptibility to opportunistic infections in solid organ transplant recipients is to a large extent dependent on the net state of immunosuppression.3 Glucocorticoids seem to facilitate infection with C. neoformans by decreasing the cell-mediated immunity.

Cryptococcus neoformans can invade various organs. The lungs are the main portal of entry. Generally, PC patients are asymptomatic or show mild symptoms; the main manifestations are cough with expectoration and dull chest pain.6,7

The pathological features of C. neoformans in the biopsy are jelly-like lesions or noncaseating granulomatous lesions. Encapsulated C. neoformans can be observed inside macrophages under high magnification.9Cryptococcus neoformans was found in the lung biopsy specimens obtained from the patients reported here, and currently, pathological diagnosis is the main approach for pulmonary cryptococcosis.

Our patient was in a good clinical condition and displayed only generalized malaise and fever. Other symptoms such as altered mental status were absent. In addition, the CSF opening pressure was normal even though an elevated opening pressure is typically found in cryptococcal meningitis. Cryptococcus neoformans was cultured from the CSF and Crypto LA antigen was also positive in CSF.

Transplant patients often present with mild and atypical symptoms. In this case, the radiological findings in the chest, biopsy, and the microscopic images of the CSF sample were the key to the diagnosis. We suggest that for transplant patients with a lung mass or nodular lesions, the possibility of cryptococcosis should be considered, and they should be aggressively investigated. Early percutaneous lung biopsy, transbronchial lung biopsy, or even surgical thoracoscopic lung biopsy is the key to accurate diagnosis of PC. A high index of suspicion for CM should be applied for solid organ transplant patients, even with minor symptoms and normal laboratory results.