Materials and methods: A total of 87 consecutive cases presenting with the first attack of acute pancreatitis were included in the study. Acute physiology and chronic health evaluation II and BISAP scores were calculated from the worst parameters in the first 24 hours, and modified CTSI was reported at 48 hours of admission. Receiver-operating characteristic (ROC) curves were plotted, and predictive accuracy of each score was calculated from the area under the curve. Sensitivity, specificity, positive predictive value (PPV), and negative predictive value (NPV) were calculated for each score.

Conclusion: The BISAP score was similar to APACHE II and modified CTSI in terms of accuracy, sensitivity, specificity, and NPV. It is much easier to calculate and a useful risk stratification tool. It should be used for early triage and referral to a high dependency unit.

Acute pancreatitis is a clinical condition resulting from inflammation of the pancreas and its systemic repercussions. It can have a wide variety of possible outcomes depending on timely intervention.

The Atlanta classification of 1992 first established a system for standardized reporting of the manifestations of acute pancreatitis.1 It was modified in 2012, and the revised Atlanta classification gave definitions as to the course and severity of acute pancreatitis.2 In early pancreatitis (course %3C;2 weeks), clinical features tend to be more reliable in determining the course of the disease, while late pancreatitis (course %3E;2 weeks) tends to be more reliant on radiological and morphological characteristics of the disease process.

There have been many scores developed to prognosticate the course of acute pancreatitis. The acute physiology and chronic health evaluation (APACHE) II score developed in 1985 and the Balthazar modified computed tomography severity index (CTSI) score developed in 1994 have been used as multifactorial scoring systems for the assessment of severity in pancreatitis.6,7 These scores have been documented to have an excellent negative predictive value (NPV) in deciding the severity of acute pancreatitis but lag behind in terms of sensitivity across previous studies.5,8 Another factor prohibiting their widespread use at the first point of contact of patients with the healthcare setup is that they are rather cumbersome to calculate. More recently the bedside index for severity in acute pancreatitis (BISAP) score was described in 2008 as a simplified model to assess the same.9,10 It looks at five readily available clinical and laboratory parameters, namely blood urea nitrogen (blood urea nitrogen >25 mg/dL), impaired mental status (Glasgow coma scale %3C;15), evidence of systemic inflammatory response syndrome (%3E;2 SIRS criteria), age of the patient (>60 years), and imaging evidence of pleural effusion (unilateral or bilateral). We hypothesize that due to its simplicity, this score may increase the promptness in the triage of cases at the first contact. This should lead to an improvement in potentially severe cases being shifted to the high dependency unit in the early window in which they will derive maximum benefit from intensive care.

A recent study in South Korea demonstrated these scores to have comparable predictive accuracy for the severity of acute pancreatitis.11 This study aims to assess and compare the efficacy of multifactorial scoring systems, specifically the BISAP score in comparison with established scoring systems like the APACHE II and CTSI scores in predicting the severity of acute pancreatitis in the Indian setup.

Institutional ethics committee approval as sought before the commencement of the study. A consecutive cohort of patients presenting to the hospital with the first attack of acute pancreatitis was enrolled in the study after written informed consent. Any patient with in-hospital mortality prior to 48 hours of hospital stay, thus preventing the classification of the disease, was excluded from the cohort.

Diagnosis of acute pancreatitis was made on the basis of the presence of two out of the following three features at presentation:

The severity of acute pancreatitis was determined as per the 2012 revision of the Atlanta classification.2

Organ failure: a score of 2 or more for any one of three major organ systems, namely the respiratory, cardiovascular, and renal systems using the modified Marshall scoring system.12

Patients who fit the inclusion criteria for the study were evaluated at presentation with documentation of clinical history, clinical examination, and laboratory investigations. They were followed up for the duration of their stay in the hospital with documentation of any radiological investigations. The endpoint for observation of each patient was the clinical cure or discharge or death of the patient.

Three scoring systems were used in the study:

Data were collected prospectively in a Microsoft Excel database. After data collection, the database was imported into SPSS for Windows (23.0, SPSS, Chicago, IL, United States). Continuous baseline descriptive variables were expressed as mean ± standard deviation (SD). Mann–Whitney U test was used for comparison of continuous variables. Categorical variables were expressed as absolute numbers and proportions. They were assessed using odds ratio (OR) calculated by the Pearson’s χ2 test or Fisher’s exact test. Correlation between each pair of scoring systems, and between each scoring system and length of hospital stay, was tested using the Spearman rank correlation coefficient. Sensitivity, specificity, positive predictive value (PPV), and NPV were calculated for APACHE II, modified CTSI, and BISAP scores. Receiver-operating characteristic (ROC) curves were plotted for the three scores to measure the predictive accuracy of each scoring system as given by the area under the receiver-operating curve (AUC). Discrimination was defined as the ability of each scoring system to differentiate between severe and mild to moderately severe acute pancreatitis and was represented by the AUC. An area greater than 0.5 signified that the scoring system was accurate in predicting severity. A p value of %3C;0.05 was considered statistically significant. The 95% confidence intervals (CIs) were used across all statistical tests.

A total of 87 patients who presented to the hospital with the first attack of acute pancreatitis were enrolled in the study. The mean age of presentation was 37.72 years with a SD of 12.60 and a range of 58 years (13 years, 71 years). Male-to-female ratio was 75 (86.21%) to 12 (13.79%). Alcohol was the most commonly implicated cause of acute pancreatitis followed by gallstone-induced and drug-induced pancreatitis, with tenofovir disoproxil fumarate (TDF) being the most commonly implicated drug (Table 1).

Based on the highest sensitivity and specificity scores in the ROC curves, APACHE score ≥8, modified CTSI score ≥8, and BISAP score ≥2 were selected as cutoffs for predicting severe acute pancreatitis. As per the Chi-square test, odds of a patient developing severe acute pancreatitis for the above-mentioned values were 4.41, 22.72, and 8.77, respectively, for APACHE II, modified CTSI, and BISAP scores (Table 4).

The sensitivity, specificity, PPV, and NPV for these cutoff values were as given in Table 5. 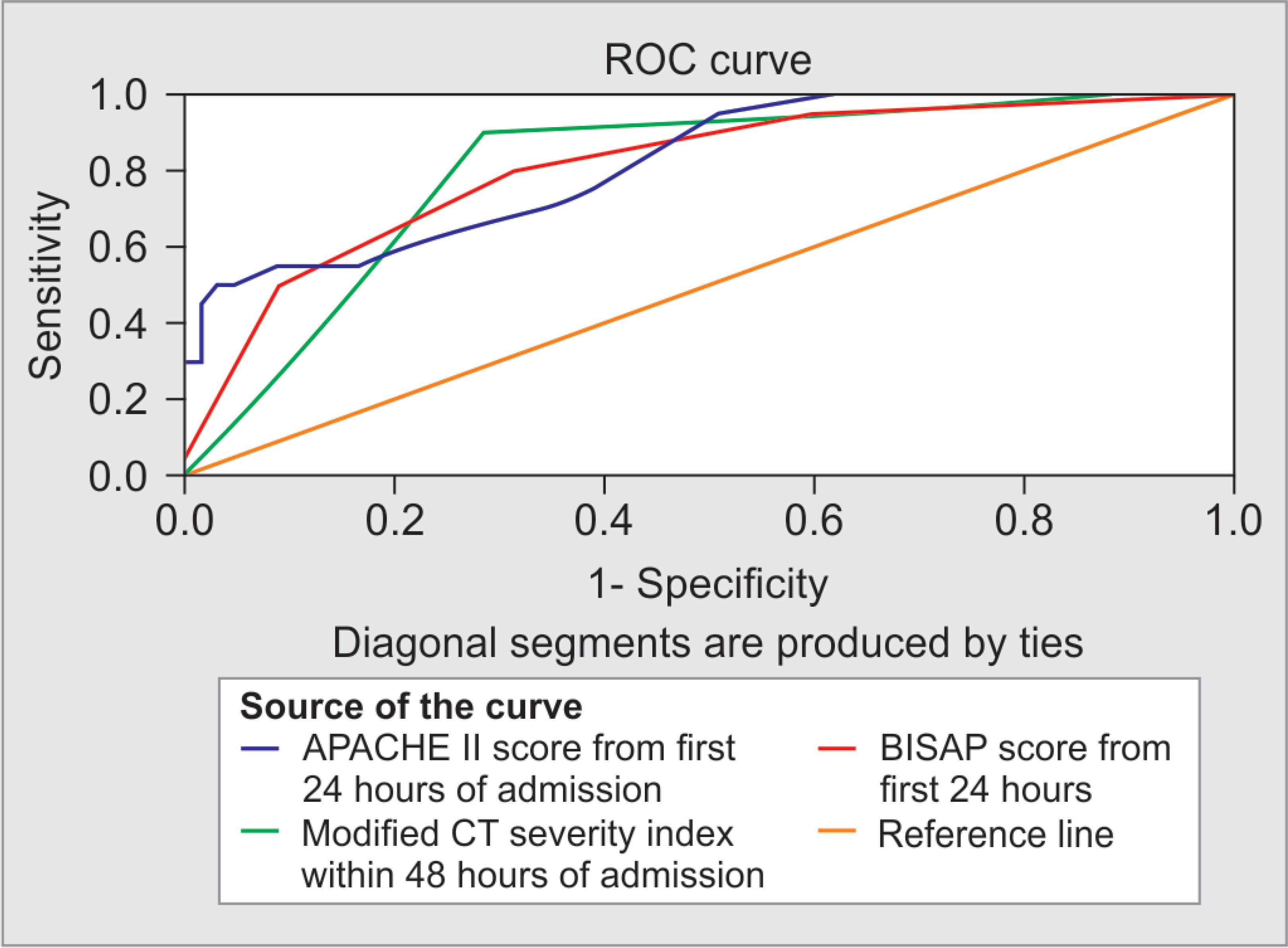 Acute pancreatitis, as a disease process is initiated in the pancreas but has widespread ramifications for the body as a whole and may affect multiple organ systems. Although 80% of cases are in the mild spectrum of disease and settle routinely with limited morbidity or mortality, the remaining 20% develop severe disease that may have mortality of up to 30%.3,4 Severe disease generally develops in certain cases from the onset of the disease itself, and slow progression of disease from mild to severe is uncommon.1,13 Early evaluation and classification of the severity of the disease process is, therefore, of critical concern in the prognosis and management of the disease.

Alcohol-related pancreatitis was the commonest cause of acute pancreatitis in this study. A study from East India lists gallstone pancreatitis to be the commonest cause in their cohort of patients.14 This parallels data from the aforementioned study from South Korea.11 A possible explanation could be the different dietary patterns in East and West India with greater consumption of sweets and snacks in East India contributing to multiple risk factors like diabetes, hypertension, and hypercholesterolemia.15 The higher prevalence of HIV in Maharashtra accounts for the significantly greater cases of TDF-induced acute pancreatitis. Literature shows the age of onset reported across most studies to be in the sixth to seventh decades.8,11 In contrast, acute pancreatitis was found to affect a much younger cohort in our study. This should be of concern, as it reflects the earlier onset of lifestyle-related disease in our country which is in a demographic transition from young to middle age. The skewed male-to-female ratio of cases also needs further study, preferably in cohorts of patients in Western India.

The morbidity and mortality of acute pancreatitis are affected by the systemic inflammatory response in the early phase and by persistent organ failure and local and systemic complications of the disease in the late phase.2,16 Hence, the 2012 revision of the Atlanta classification focused on the persistence of organ failure as the determinant of severity. A total of 23% of our patients had severe acute pancreatitis which is on par with other studies that have used the revised Atlanta classification. There were 10 deaths (12.64%) in our study group. This is similar to other studies from the Indian subcontinent which have reported mortality of 12.5% and 10.1%.14,17 This is unacceptably high when compared with global outcomes which report mortality as low as 1.9% and 1%.11,18 Lack of health education, systematic triage, and risk stratification as well as delayed referral are endemic to the healthcare setup in India and reflect in the high mortality.

At present, multiple scoring systems are available for prognostication of the severity of acute pancreatitis. An ideal prognostic score should be simple, use parameters that are readily available even in the basic setup, have good sensitivity and specificity, and be accurate, while not subjecting the patient to any significant discomfort.

Several individual factors were found to be higher in the severe acute pancreatitis group including creatinine, blood urea nitrogen, hematocrit, fasting blood sugar, and baseline white blood cell count in this study. However, considered alone, all of these factors have previously been shown to have poor specificity for severe acute pancreatitis and may represent a component of the systemic inflammatory response itself.19,20

On comparison of predictive accuracy of the three scores for severe acute pancreatitis, all were found to show good and comparable accuracy. However, statistically, APACHE II was the most accurate of the three with an AUC of 0.821. Previous practice guidelines have recommended APACHE II for early risk stratification within 3 days of admission, though no specific recommendation exists as per the current guidelines.3,21 Of note, the BISAP score, though much less cumbersome to calculate and more economical, is equally accurate as the other two. This makes it an ideal score to be used in the primary and secondary care setup for triage and risk stratification and decision regarding referral to higher setups.

The BISAP score has sensitivity and specificity comparable with APACHE II and CTSI scores and an excellent NPV for severity of acute pancreatitis. Cutoff values established as per our study were ≥2 for BISAP score, ≥8 for APACHE II, and ≥8 for CTSI score. These cutoffs for APACHE II and BISAP are comparable with other studies.8,11,14 Computed tomography severity index score cutoffs have shown more variability across the same studies. Computed tomography severity index scores are directly dependent on the morphological changes in the pancreas, and these differ with the time after onset that the patient presents to the hospital. The absence of morphological distortions in the early phase and the cost of the scan are inhibitions of this modality.

There are certain limitations to this study. The bigger sample size would have been ideal. There was a lack of uniformity in the time of presentation of cases to the hospital after the onset of the disease since a large proportion was referred after initial treatment at other hospitals.

Although the APACHE II score demonstrated highest accuracy in predicting the severity of acute pancreatitis, the BISAP score was comparable across the parameters of accuracy, sensitivity, specificity, NPV and relatively easier to calculate. It should be popularized at primary and secondary care institutes to enable early triage and referral to higher centers. There is a need for a systematic review and targeted intervention to bring down mortality of acute pancreatitis in our country.