Materials and methods: Data were collected for patients >18 years of age who underwent endovascular treatment for AIS from January 2009 to June 2015. A good outcome was defined as modified Rankin score (mRS) of 0 to 3 at discharge and a poor outcome as mRS of 4–6. A logistic regression analysis was performed to identify independent predictors of outcomes at discharge in both groups. A p value of %3C;0.05 was considered statistically significant for all analyses.

Conclusion: Our data suggest that the occurrence of TIA preceding an AIS may be associated with the poor outcomes in patients with AIS, although this finding needs confirmation in larger studies.

Conditioning is a strategy where a sublethal noxious stimulus presented to any tissue in the body invokes endogenous protective mechanisms so that the organ develops tolerance toward subsequent similar or stronger insult. A variety of conditioning agents have been shown to provide protection in a variety of organ systems through conditioning-based mechanisms.1–3 Although initially applied for cardiac protection, this application has been shown to elicit therapeutic benefits for various organ systems such as brain, liver, kidney, lung, pancreas, skin, skeletal and smooth muscle, and the peripheral vasculature.4 Conditioning against brain injury can be induced by various conditions and agents such as ischemia,4–7 hypoxia,6–9 anesthetics,3 thrombin,2 lipopolysaccharides,1 and many drugs some of which have already been approved by Food and Drug Administration.

Hypoxia and ischemia are the two most commonly studied conditioned stimuli in various central nervous system pathologies, and there are several animal and clinical studies which have shown the neuroprotective role of hypoxic and ischemic preconditioning in acute ischemic stroke (AIS).4–9 Certain clinical comorbidities, such as chronic obstructive pulmonary disease (COPD), obstructive sleep apnea (OSA),10,11 TIA,12–15 and peripheral vascular disease (PVD)16 may simulate the hypoxic and ischemic preconditioning state. The aim of our study is to assess the neurovascular protective role of various clinical scenarios which imitate hypoxic and ischemic conditions in patients who presented with AIS.

After institutional review board approval, data were collected from all patients %3E;18 years of age who underwent endovascular treatment of AIS at our comprehensive stroke center from January 2009 to June 2015. A total of 106 patients were treated during the study period. Out of 106, 102 patients had conscious sedation and 4 patients had general anesthesia. Patients treated under general anesthesia were excluded. Data on comorbid diseases, medication history, laboratory parameters, and social history were collected from electronic medical records. The NIHSS score and the mRS at discharge and at 3 months were obtained from the Department of Neurology database. The NIHSS score was evaluated by vascular neurology residents and fellows, and the mRS score was evaluated by stroke nurses certified in the use of the mRS instrument. The primary outcome measure is the mRS at discharge. A good outcome is defined as mRS of 0–3 and a poor outcome as mRS of 4–6.

The clinical conditions of patients with a good outcome were compared with those of patients with a poor outcome using the univariate analysis with Chi-square test, Fisher’s exact test, independent t test, and Mann–Whitney test, as appropriate. Variables which are not normally distributed are represented as median (minimum, maximum). A logistic regression analysis was performed with a neurologic outcome at discharge as the dependent variable, using the ENTER method, to evaluate factors of interest (age, history of TIA, and pre-procedural NIHSS score) as independent predictors of a poor outcome at discharge. The overall fit of the regression model was assessed using the c-statistic, measuring the area under the receiver-operating characteristic (ROC) curve (AUC) and with Hosmer and Lemeshow test as a measure of goodness of fit. Statistical analyses were performed using MedCalc for Windows, version 18.11 (MedCalc Software, Ostend, Belgium). A p value of <0.05 was considered statistically significant for all analyses.

Table 1 shows the various clinical conditions for patients with a good outcome vs patients with a poor outcome at discharge. In this series, patients with the good outcomes had significantly lower NIHSS score (p ≤ 0.0001) and lower incidence of TIA prior to the current stroke (p = 0.007). There was no significant difference between the two groups with respect to age, gender, hypertension, atrial fibrillation, diabetes, renal insufficiency, anemia, coronary artery disease, congestive heart failure, valvular problems, OSA, COPD, thyroid problems, pulmonary embolism, deep vein thrombosis, cancer history, smoking, alcohol, drug abuse, and use of medications.

Values are represented as OR and 95% CI; p < 0.05 is statistically significant

The main finding in our study is that the patients with history of previous TIA and subsequent AIS have poor prognosis compared with patients without history of TIA. This finding contradicts the findings of several clinical and animal studies where TIA was shown to confer neurovascular protection, presumably due to ischemic preconditioning, although controversial evidence exists related to the history of previous TIA and the outcomes of consequent AIS.12–25 Ischemic stroke is one of the common reasons for mortality and morbidity throughout the world, and it is well known that the occurrence of TIA increases the risk of consecutive ischemic stroke.26 Knowledge regarding the effects of TIA on the subsequent attack of the ischemic stroke is critical as therapies can be effectively used to prevent the recurrent stroke. 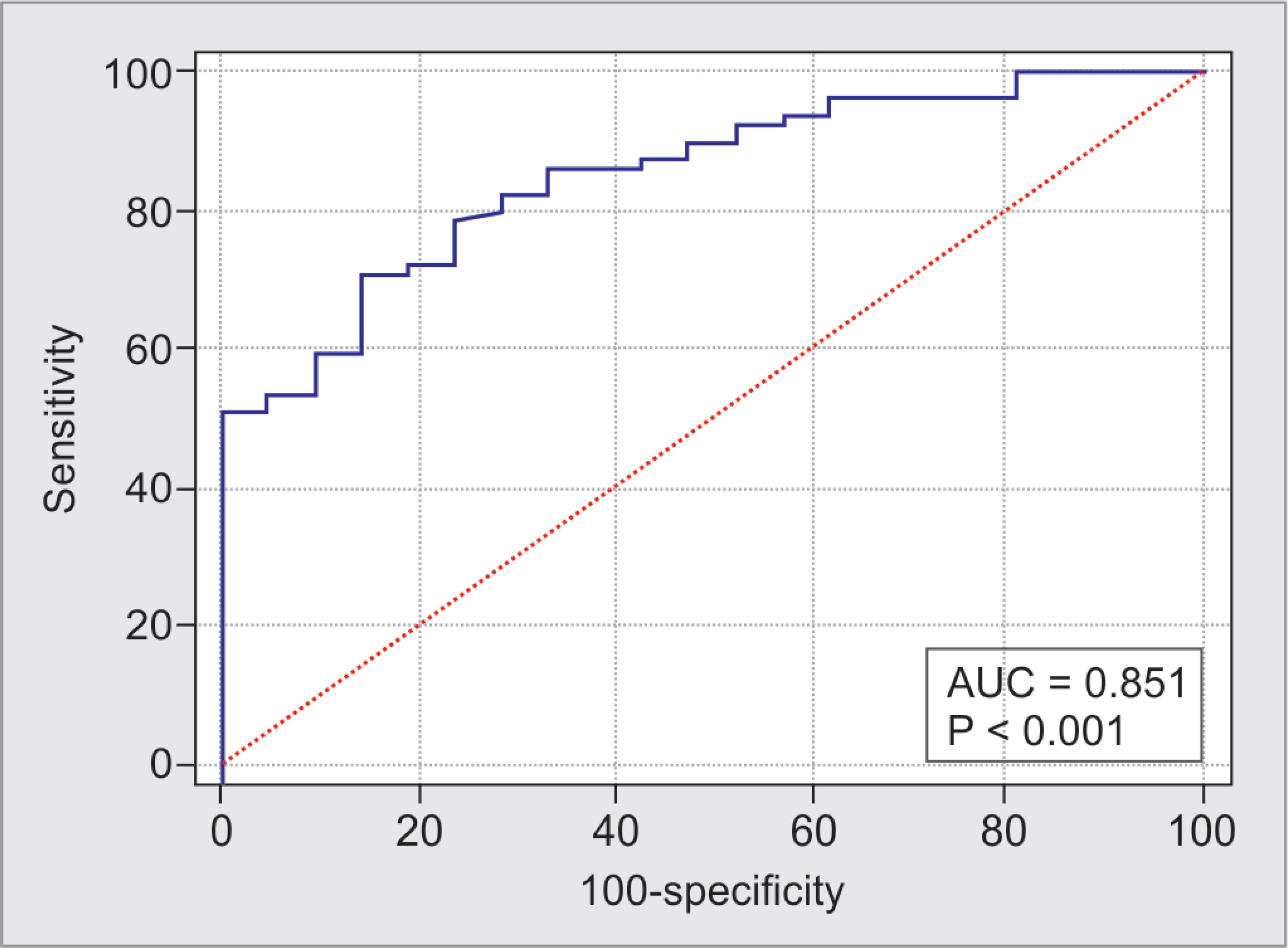 Fig. 1: Receiver operating characteristic curve for the predictor variables and the entire model. Area under the curve for the overall model is 0.851

Ischemic conditioning is a commonly applied powerful strategy which is shown to have strong protective effects in various organs, including the brain.27 Ischemic conditioning not only provides neuronal protection but also protection against other components of the neurovascular network such as glia and vascular endothelial cells.27 The neuroprotection through ischemic conditioning is proposed to occur through multiple mechanisms such as (1) depression of cerebral metabolism and activity, (2) activation of signaling pathways and mechanisms at the cellular level, (3) changes in mitochondrial functions, and (4) alterations of excitatory and inhibitory neurotransmitters and other processes.27

Clinical conditions such as TIA, COPD, OSA, and PVD may result in a naturally occurring ischemic preconditioning process. Obstructive sleep apnea is a disease condition where patients are exposed to repeated short episodes of hypoxemia through multiple apneic episodes during sleep. The intermittent hypoxia caused by these apneic episodes simulates the ischemic/hypoxic conditioning and stimulates the adaptive responses responsible for the neuroprotection.10,11 Similarly, patients with PVD and chronic limb hypoperfusion can provide neuroprotection against ischemic stroke through a concept called remote ischemic preconditioning.16 It is difficult to exclude the effects of these clinical conditions on the severity of ischemic stroke in our study because of the relatively small sample size.

Transient ischemic attack is a process which naturally correlates well with ischemic preconditioning. Few articles suggest that history of TIA is associated with the poor outcomes in ischemic stroke patients presented that (1) silent infarcts or TIAs did not influence the long-term outcomes or mortality of ischemic stroke patients,28,29 (2) the concept of ischemic preconditioning may be lost in elderly patients due to the age-related loss of endogenous mechanisms protecting against cerebral ischemia,19,22 and (3) history of TIA is associated with a poor functional outcome at 3 months and the atherothrombotic stroke and vascular risk factors were higher in the TIA group compared with patients without TIA.17

Articles supporting the role of TIA in ischemic preconditioning have shown that (1) previous ipsilateral TIAs with subsequent anterior circulation stroke present with less stroke severity and have better functional outcomes,15 (2) the duration of TIA and the timing of the subsequent stroke may have an impact on prognosis15,18,22 although this was not supported by Weber et al.,13 (3) previous TIA in the same vascular territory of the current stroke may have better prognosis,23 (4) have a protective role in lacunar19 and nonlacunar ischemic strokes,12 (5) lower stroke severity at presentation,13 and (6) preceding TIA was associated with reduced hospitality case fatality rate.25 Although controversial evidence exists in reference to the protective effects of TIA on the ischemic stroke, it has been shown that TIA is protective if it is recent, occurred multiple times with a shorter duration.

The results from our study do not completely rule out the protective effects of ischemic conditioning in the ischemic stroke patients, because the outcome after AIS depends on several factors, including (1) acuity vs chronicity of the TIA; (2) latency of TIA to the successive stroke, number of TIAs before the stroke, side, vascular territory, and severity of the previous TIA; (3) etiology of the stroke; and (4) treatments provided for the TIA and the subsequent infarction.

Limitations of our study include (1) the fact that this is a single-center study; (2) retrospective data collection; (3) relatively small sample size and possible selection bias, so that the study is likely underpowered to evaluate clinically important associations between all hypoxic/ischemic conditions with the neurologic outcomes; (4) could not retrieve the information regarding anterior vs posterior TIA and their treatment with antiplatelet medications; and (5) classification of the outcomes with mRS (0–3)30,31 was based on the functional independence although many agree that mRS (0–2) better reflects the reality of the good outcome. The poor outcome trend in our patient group may be related to our previous selection criteria for the procedure. Nevertheless, prophylactic measures should be taken to mitigate or prevent risk factors after the occurrence of TIA, in an attempt to reduce the risk of subsequent ischemic stroke.

Our data suggest that history of previous TIA and higher NIHSS score at presentation are predictors of the poor outcomes at discharge in patients with AIS. Despite the significant limitations of this study, measures should be taken to minimize the risk factors after TIA in an attempt to reduce the risk of subsequent stroke.