Paraquat Poisoning: A Retrospective Study of 55 Patients From a Tertiary Care Center in Southern India

Background: In India the data on paraquat (PQ) poisoning are limited to case reports and small case series. Hence, this study was carried out to understand the clinical features and outcomes of PQ poisoning. We also briefly report the relevant Indian studies on PQ poisoning.

Materials and methods: This was a retrospective case record-based study of PQ poisoning victims admitted over a period of 5 years.

Results: Of the 55 patients included in this study, the in-hospital mortality rate was 72.7%. Acute kidney injury was the most common manifestation. The use of cyclophosphamide did not affect the clinical outcome. Hemoperfusion (HP) was not done for any patient. Pulmonary edema and acute tubular necrosis were the most common histopathological findings.

Conclusion: In India, this is one of the most comprehensive studies of PQ toxicity. Hence, we hope that this information would be of use to clinicians who deal with PQ poisoning.

Paraquat is a commonly used herbicide in India.1 Suicides due to paraquat (PQ) are an important cause of morbidity and mortality, especially due to the absence of specific antidote. Metabolism of PQ generates free radicals that damage the cellular organelles and membranes, causing damage to many organs, especially the pulmonary alveolar epithelium.2

Consumption of PQ > 40 mg/kg causes acute multiorgan failure with death within the first 2 days, while %3C; 20 mg/kg of PQ causes mild symptoms and most survive.3

Paraquat of 20–40 mg/kg causes severe mucosal damage followed by multiorgan failure. The few, who survive, die within 2–4 weeks due to lung fibrosis. The pulmonary alveolar cells selectively accumulate polyamines that are required for cellular functions. Being structurally similar to polyamines, PQ gets accumulated in these cells, causing selective delayed lung injury.4

Although there is no specific antidote, most patients receive steroids/cyclophosphamide/antioxidants to reduce free radical damage.

This was a retrospective study of case records of patients with PQ poisoning admitted to medicine wards over a period of 5 years (January 2014 to December 2018).

All consecutive patients of age more than 12 years were included in this study. Diagnosis was based on history of PQ intake and/or identifying the container with PQ. Those with prior renal/hepatic or lung diseases were not excluded.

A pro forma was used to collect data regarding the demographics, symptoms, complications, outcomes, treatment with immunosuppression, laboratory, and radiological findings. Amount of PQ ingested was classified as mild (<10 mL), moderate (10–20 mL), and severe (%3E;20 mL).4

Lung involvement was diagnosed based on hypoxemia and infiltrates on chest X-ray. Kidney injury was diagnosed by raising creatinine/oliguria/need for dialysis. The use of steroids and cyclophosphamide was decided on case-to-case basis by the treating units, and no specific protocol was used for the same.

Mortality included patients who were taken against medical advice, when they deteriorated due to refractory hypotension/multiorgan failure. Postmortem records were analyzed to know the organs involved and their histological features.

Descriptive statistics was used to denote baseline characteristics. Chi-square test was used to study the association between modality of treatment and mortality.

A total of 55 patients were included in this study (Table 1).

Most of them were males (65.4%) and the median age was 28 years. Many patients (54.5%) presented by 6–12 hours after ingestion of PQ and 54.5% had consumed moderate amount of PQ. Hypotension was documented in 32.7%. Lung injury was documented in 61.8% and 18.1% needed mechanical ventilation. Of the 35 who had undergone chest X-ray, 10 had lung infiltrates. Computed tomography chest was done for two patients, which was normal. Paraquat tongue was documented in six patients.

Acute kidney injury was documented in 81.8%, and 56.3% had undergone dialysis.

Details of liver function tests were available for 45 patients, of whom 33.3% had bilirubin > 2 mg/dL. Elevation of (more than two times the upper normal limit) aspartate (AST), alanine aminotransferase (ALT) and alkaline phosphatase (ALP) was reported in 46.4%, 46.4%, and 24.4%, respectively. Acute hepatic failure was not noted in anyone.

Of the 15 survivors, 7 could not be contacted, 5 were alive, and 3 died later elsewhere (within 2 months, likely due to delayed pulmonary fibrosis).

Autopsy was done on 30 patients (Table 2). Lungs, liver, and kidneys were sent for histopathological analysis. Lung was involved in all cases, with pulmonary edema and hemorrhage being the most common findings. Chronic venous congestion of the liver and renal acute tubular necrosis were the other important findings (Fig. 1). No characteristic histological findings were observed that suggested PQ poisoning.

In this retrospective study of 55 patients, most were males in the age-group of 20–40 years. Acute lung and renal involvement led to high mortality rate of 72.5%, with at least three more dying after discharge due to delayed lung fibrosis. The use of immunosuppression did not affect the outcome.

We tried to compare our data with other studies from India. Except for one study by Rao et al.,5 most of the reported data are limited to small series of less than 10 patients or case reports (Table 3). Of the 101 patients studied by Rao et al., the mortality rate was 61.4% which is less than that in our study. This may be because patients who left against medical advice were excluded. Also, delayed mortality due to lung fibrosis has not been reported in any of the Indian studies, while 3 of the 15 of our patients died due to lung fibrosis. This suggests that the so-called survivors should be kept on close follow-up and the overall mortality rates could be higher than reported.

Note: some patients had more than one findings in the involved organs 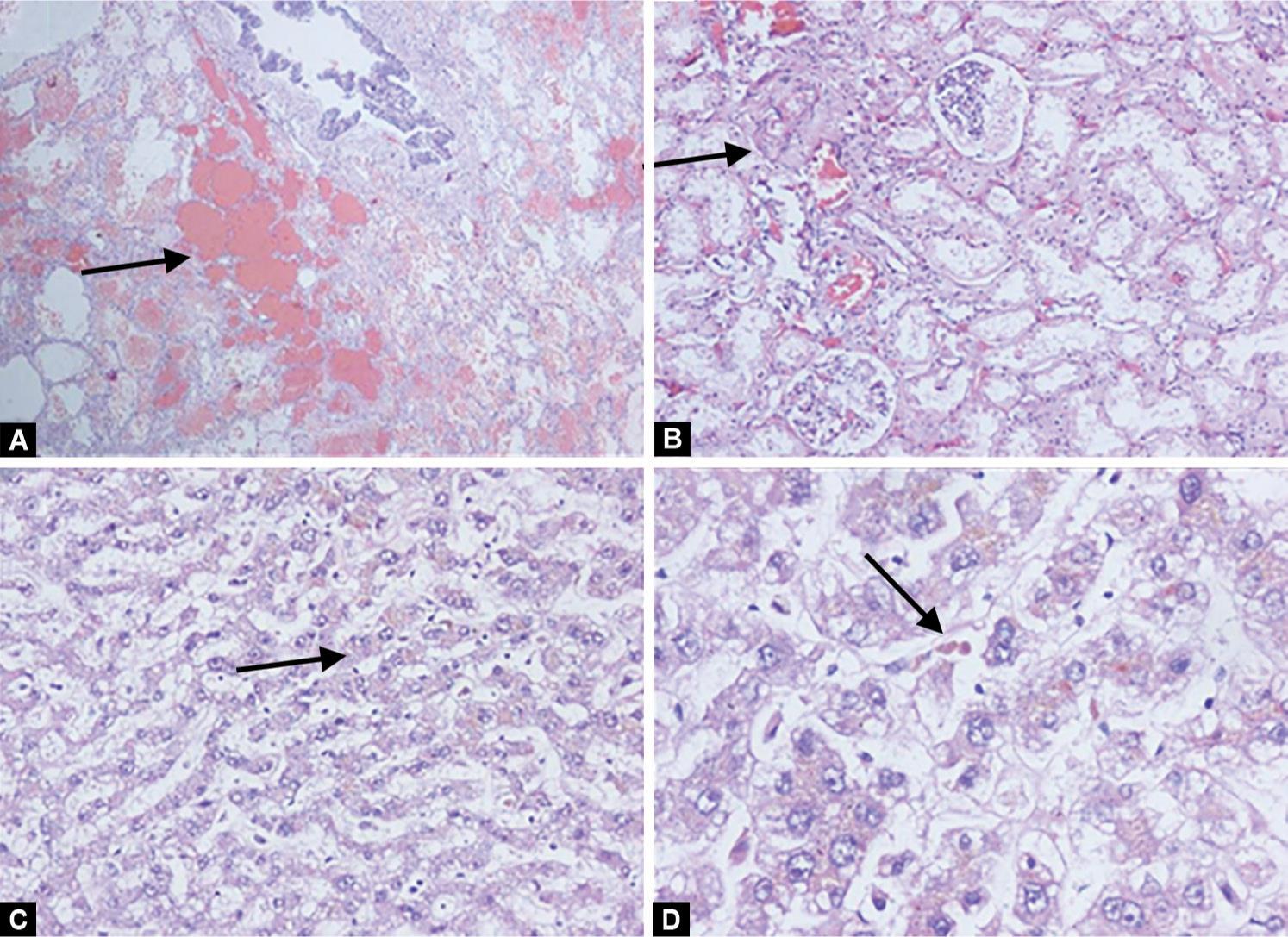 Efficacy of Cyclophosphamide and HP

Evidence for possible beneficial role of HP in PQ poisoning has been restricted to case series and retrospective studies. Rao et al.5 reported that early HP may be of benefit. However, PQ is rapidly excreted by the kidneys, 80–90% by 6 hours and 100% by 24 hours.3 Hence, HP may not offer added benefit in those patients who have preserved renal function, at least in the first 24 hours. In our study, hemodialysis was done in 50.4% but HP was not done for anyone. Although Li et al.8 showed a moderate benefit of combining HP with continuous venovenous hemofiltration, another study by Koo et al.9 did not find any advantage of this therapy. Paraquat could still be detected in the viscera of those who died despite receiving HP and immunosuppression, suggesting that these measures may not be of use in PQ poisoning.10

Congestion and edema of the viscera (especially lungs) and brain have been reported by Kanchan et al.11 (14 patients) and by Prasad et al.12 (5 patients). In our study, congestion and hemorrhage were the most common findings in the lung. Pulmonary fibrosis was not documented, since all autopsy patients had died during the acute phase of PQ poisoning. Kidney involvement in the form of acute tubular necrosis (ATN) is expected, since PQ has rapid renal elimination. In only two patients, PQ could be detected in the viscera. This may because of the rapid elimination of PQ.

Since this is a retrospective study, laboratory data were not available for some patients. Biochemical confirmation at bedside was not done. This study was not powered to assess the efficacy of cyclophosphamide in PQ poisoning. Follow-up data were missing for seven patients.

Our study showed a very high in-hospital mortality rate of 72.7%. The amount of PQ consumed and the presence of lung injury had correlation with mortality rate, while the use of steroids/cyclophosphamide did not lead to reduced mortality rate.

In the absence of effective antidote and specific treatment, PQ continues to cause very high mortality rates. In many countries (Sri Lanka, South Korea), PQ has been banned,2,13 which were followed by reduction in pesticide-associated mortality rates. We hope that this study will help clinicians in the management of PQ poisoning.