Background: Mucormycosis is a rare fungal infection affecting immunocompromised patients, with the rhinocerebral variant as the most common presentation.1 Garcin syndrome is the progressive involvement of the cranial nerves resulting in total unilateral paralysis of cranial nerves, absence of sensory or motor deficits, and not associated with features of raised intracranial pressure.2 We report a case of invasive rhinocerebral mucormycosis presenting as Garcin syndrome and acute ischemic stroke.

A 60-year-old gentleman, a poorly controlled diabetic with nephropathy and hepatitis B-positive status, presented with a history of diplopia and blurring of vision of the left eye for 3 weeks. He gave a history of deviation of angle of mouth to the right for 1 week. He also complained of pain over the left periauricular area and hoarseness of voice for the past 2 days. On presentation, he had a Glasgow coma scale (GCS) score of 15. However, he was severely dehydrated with features suggestive of the nonketotic hyperosmolar state with sepsis. Examination revealed left corneal ulcer, ulcer over the left half of the palate with black necrotic debris, tenderness over the left maxilla, with enlarged and tender left parotid. The neurological assessment revealed left-sided external ophthalmoplegia with fixed nonreactive pupil, numbness over the left half of the face, and lower motor neuron (LMN) type of left facial palsy. The patient was aggressively treated with intravenous fluids and insulin to optimize the hyperglycemic stage and correction of electrolyte imbalance in the first few hours of admission. Magnetic resonance (MR) imaging of brain revealed left ethmoid sinusitis, left mastoiditis, along with an infiltrating lesion over the left submandibular, parotid, and parapharyngeal spaces (Fig. 1). The magnetic resonance time of flight (MR TOF) sequence showed absent flow void in the left external carotid artery. The cerebrospinal fluid analysis revealed mixed pleocytosis with 660 cells (63% neutrophils, 37% lymphocytes).

Given the above features, a provisional diagnosis of extraaxial invasive fungal infection was made. Initial investigation showed a total leucocyte count of 36 × 109/L with elevated procalcitonin and acute-phase reactants. The patient was empirically started on meropenem and posaconazole. Over the next 24 hours, the patient developed features of cranial nerve (CN) IX, X, XII palsy as evidenced by the deviation of the uvula to the right side, stridor, deviation of the tongue to the left, and difficulty in swallowing necessitating nasogastric tube insertion. The patient was intubated; direct laryngoscopy revealed left vocal cord abductor palsy. The otorhinolaryngology evaluation showed large debris in the anteroinferior aspect of the left side of the nasal septum, left palate, and alveolar region and a bedside debridement was done, and the swab was sent for mycology and culture. Tissue mycology showed growth of Rhizopus oryzae, thereby confirming the diagnosis to be rhinocerebral mucormycosis. As the patient presented with acute on chronic renal failure, liposomal amphotericin B 5 mg/kg/day was started after nephrology consultation. However, the disease was rapidly progressive with the patient having a drop in sensorium (GCS-8) within the next 12 hours, and computed tomography (CT) of the brain showed bilateral anterior cerebral artery (ACA) territory infarct. Surgical decompression and excision of mucormycosis could not be considered due to poor renal function and hemodynamic instability as the patient was in septic shock. Antiedema measures and vasopressors to augment blood pressure were initiated. However, the patient succumbed to death due to the aggressive infection resulting in multiorgan dysfunction within the ensuing 8 hours. 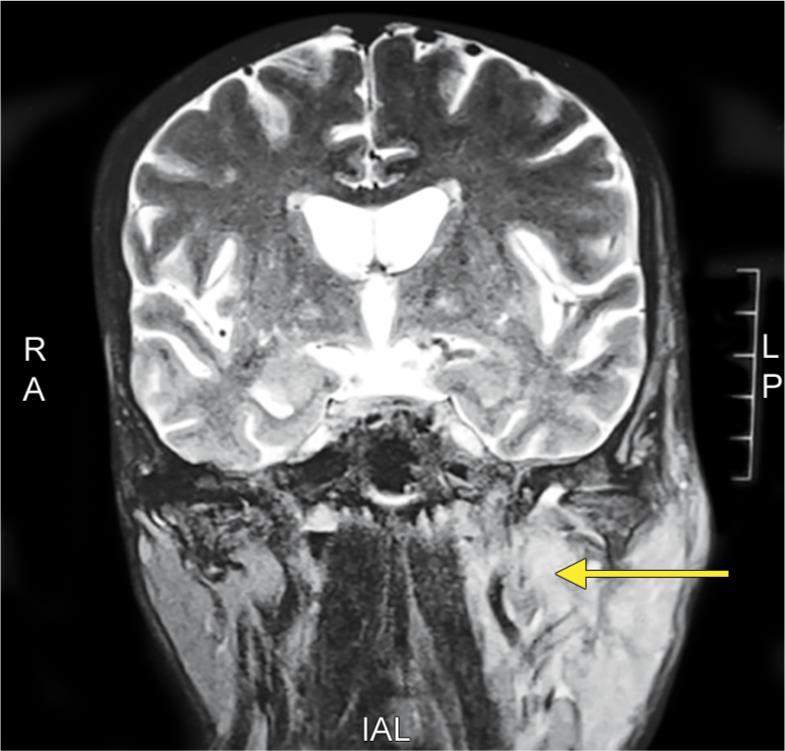 Patients with rhinocerebral mucormycosis present with fever, lethargy, black nasal secretions, headache, orbital pain, orbital cellulitis, proptosis with or without sudden loss of vision with a typical necrotic ulcer in the palate or nasal mucosa.1 They may present with features of CN III, IV, V, and VI palsies such as ptosis, mydriasis, diplopia, and loss of sensation over the ipsilateral side of the face due to the local infiltration into the cavernous sinus. Associated facial paralysis has been reported as a rare entity in the past.3 Other conditions that can have a similar presentation to mucormycosis include sarcoidosis, which can present with basal meningitis, parenchymal involvement of brainstem and hypothalamus, cranial neuropathies, and is associated with systemic features like erythema nodosum and pulmonary symptoms. Wegener’s disease can present with cranial nerve palsy but also has systemic manifestation mainly involving the pulmonary system.2 Our patient did not have systemic features, which ruled out these conditions. The patient tested negative for Sjogren’s syndrome, carcinomatous meningitis, and meningovascular syphilis.

In rhinocerebral mucormycosis, the involvement of CN III, IV, V, and VI has been reported priorly and is due to the extension of disease into the retroorbital region and cavernous sinus. In our case, there was additional involvement of CN VII, IX, X, and XII within 24 hours of admission. This clinical presentation has not been reported in the past and led to further evaluation of the patient to identify the causation. We ruled out causes of lower cranial nerves’ involvement such as neoplasms of the posterior fossa, vascular malformations at the base of skull, trauma, brainstem infarct, and degenerative disorders like amyotrophic lateral sclerosis. The MRI of the brain revealed the extension of infection to the left parapharyngeal space, carotid sheath, and skull base resulting in left LMN type cranial nerve palsy due to the local invasion of the neural tracts by the infective pathology and associated neural and perineural edema. Guillain-Alajouanine-Garcin syndrome was first described in 1926 as “syndrome paralytique unilateral global des nerfs crannies,” which consists of multiple cranial nerve palsies (at least seven ipsilateral cranial nerves) without any evidence of long tract signs or increased intracranial pressure.4 It is usually encountered in malignant skull base osteoclastic lesions. However, it is also described with pachymeningitis secondary to otitis media, hypertrophic pachymeningitis, carcinomatous leptomeningitis, lymphomatous meningitis, oropharyngeal carcinomas, and giant internal carotid aneurysm.3,5

Histopathologically, tissue infarction, angioinvasion with thrombosis of venous sinus or carotid artery, and tissue necrosis are hallmark of mucormycosis.6 In this case, the aggressive invasion of the carotid artery and cerebral vasculature could have resulted in the reduced cerebral blood flow causing ACA territory infarct and sudden drop in sensorium. Factors indicating poor prognosis in rhinocerebral mucormycosis include delay in initiating treatment up to 6 days after diagnosis, hemiparesis or hemiplegia, and bilateral involvement of the sinuses, orbit, and palate.7 The disease could progress rapidly and result in death unless risk factors are optimized and appropriate antifungal therapy. Though our patient was started on posaconazole within 24 hours and liposomal amphotericin B within 72 hours of presentation, this case had a rapid and aggressive progression resulting in an unfavorable outcome. The poor renal function, septic shock, and the weak immune system also contributed to the poor clinical outcome.

Consent obtained from the patient for publication of this case report.

All authors approved the final version to be published.