Validation of an Isothermal Amplification Platform for Microbial Identification and Antimicrobial Resistance Detection in Blood: A Prospective Study

Background: Recent advances in nucleic acid amplification technique (NAAT)-based identification of pathogens in blood stream infections (BSI) have revolutionized molecular diagnostics in comparison to traditional clinical microbiology practice of blood culture. Rapid pathogen detection with point-of-care diagnostic-applicable platform is prerequisite for efficient patient management. The aim of the study is to evaluate an in-house developed, lyophilized OmiX-AMP pathogen test for the detection of top six BSI-causing bacteria along with two major antimicrobial resistance (AMR) markers of carbapenem and compare it to the traditional blood culture-based detection.

Materials and methods: One hundred forty-three patients admitted to the Medical Intensive Care Unit, Narayana Hrudayalaya, Bangalore, with either suspected or proven sepsis, of either gender, of age ≥18 years were enrolled for the study. Pathogen DNA extracted from blood culture sample using OmiX pReP method was amplified at isothermal conditions and analyzed in real time using OmiX Analysis software.

Results: Among the processed 143 samples, 54 were true negative, 83 were true positive, 3 were false negative, and 2 were false positive as analyzed by OmiX READ software. Gram-negative bacteria (91.3%) and gram-positive bacteria (75%) were detected with 100% specificity and 95.6% sensitivity along with the AMR marker pattern with a turnaround time of 4 hours from sample collection to results.

Blood stream infections (BSI) ranging from mild bacteremia to potentially life-threatening septic shock are posing a major healthcare burden worldwide.1,2 A delay in appropriate treatment could lead to multiorgan failure and eventual death.3 Overall mortality due to sepsis in developing countries like India is about 63%, of which 34% of deaths were from the intensive care unit (ICU)of hospitals.4

Traditional blood culture (BC) takes 48–72 hours for pathogen detection with culture positivity rates of 10–25%.5,6 Meanwhile treating patients with high-end antibiotics like carbapenems and colistin has changed the epidemiology and susceptibility patterns of microorganisms, with a huge impact on antimicrobial stewardship.7–9 The higher turnaround time (TAT) along with the lack of sensitivity and contamination issues associated with BC testing highlight the need for a more rapid and accurate method for pathogen detection and antibiotic susceptibility patterns.10

In order to provide a cost-effective, easy-to-use diagnostic platform that can be POC deployable, OmiX Labs has developed an isothermal test for BSI called OmiX-AMP pathogen test to detect the gene signatures of top 6 bacterial pathogens and related antibiotic resistance based on Indian epidemiology. The bacterial pathogens in the panel include Escherichia coli, Klebsiella pneumoniae, Acinetobacter baumannii, Pseudomonas aeruginosa, Enterococcus spp., and Staphylococcus aureus along with carbapenem antibiotic-resistant markers: NDM and OXA-48. In this study, we have clinically validated the OmiX-AMP pathogen test, and concordance was established in comparison to traditional BC test results of critically ill patients. As the first study using such a platform for isothermal tests for BSI, it was preferred to first validate in BCs and compare it to the existing tests in the market.

The study was designed to recruit 150 patients with suspected BSI, from whom blood samples were collected for standard culture by BD BACTEC FX(tm) system (USA). Patients admitted to medical intensive care unit with suspected/proven sepsis and ≥18 years of age of either gender were approved by the institutional review board of Narayana Hrudayalaya, Bangalore, India (protocol number-NHH/MEC-S01/A-1-2019). The study has been registered with The Clinical Trials Registry-India, with the registration number: CTRI/2019/04/018459.

BC for ID and Antibiotic Susceptibility Test (AST)

The enrolled 150 samples were 100 BC-positive and 50 BC-negative cases and the study design allowed for 90% power to detect the top 2 pathogens with 5% type I error. Blood samples were collected in BD BACTEC(tm) plus anaerobic and aerobic bottles separately and incubated for a period of 7 days. BC bottles that beeped positive were processed for Gram staining and subculturing in blood agar and MacConkey's agar medium for organism ID. Meanwhile, 2 ml of blood from BC-positive bottles and BC-negative bottles (no growth after 7 days of incubation) was sent to the OmiX-AMP pathogen test platform. The information of the pathogen identified by BC and AST were kept confidential and only made available at the end of the validation study with the OmiX-AMP pathogen test results.

OmiX-AMP pathogen test was prepared using LAMP master mix and dispensed into plasma-treated 0.2 ml clear tubes. The dispensed formulation tubes were freeze-dried using OmiX proprietary lyophilization program in Genesis SP Scientific pilot freeze dryer. After freeze-drying, lyophilized tubes were visually checked for “white cake” appearances, assembled in OmiX-AMP ID sepsis test kit format of eight unitized panels (in duplicates) along with a positive control and a negative control in the silver pouches with a desiccant and stored at room temperature. Tris-Cl (pH 8.8)–based reaction buffer was provided with each pouch for reagent reconstitution before testing reaction. The quality of each manufactured batch of the OmiX-AMP test kit was tested with the OmiX laboratory standard control DNA samples. Quality-approved batches were used for testing clinical samples.

For each clinical sample, a unitized panel pouch was utilized. Reconstitution buffer (20 μL) was added to each tube to reconstitute the lyophilized reagents. Then, 5 μL of DNA was added to each of the 18 reaction tubes. The reaction tubes for 1 or 2 samples (18 or 36 tubes) were then placed in the Rotor–Gene Q-device (Qiagen) and heated to 65°C for 1 hour, and a final denaturation of 2 minutes at 95°C to inactivate the enzyme. No template control run was performed at regular intervals to ensure no amplicon contamination prevailed in the lab setup. At the end of the run, the real-time fluorescence data collected on the Rotor–Gene Q-device were exported to analyze the results using OmiX Analysis software.

In the present study, a total of 100 positive and 50 negative BC samples were evaluated using the OmiX-AMP pathogen test from February 2019 to June 2019. Among the 150 BCs, 6 samples were used to standardize the process, 1 sample was not processed due to insufficient quantity, and 143 samples were considered for the study (Flowchart 1).

Flowchart 1: Flowchart of blood culture samples considered for the study

Of the 143 BC samples, 89 were culture positive and 54 were culture negative as per standard BC results. Of these 89 culture-positive cases, 50 were positive for the pathogens which are part of the OmiX-AMP pathogen test, 15 were CoNS which are considered in BSI as contaminants, and 24 samples were positive for off-panel organisms (Table S1). The rate of OmiX panel organisms was 73% [(50+15)/89] and 27% of cases were not part of the OmiX-AMP panel. 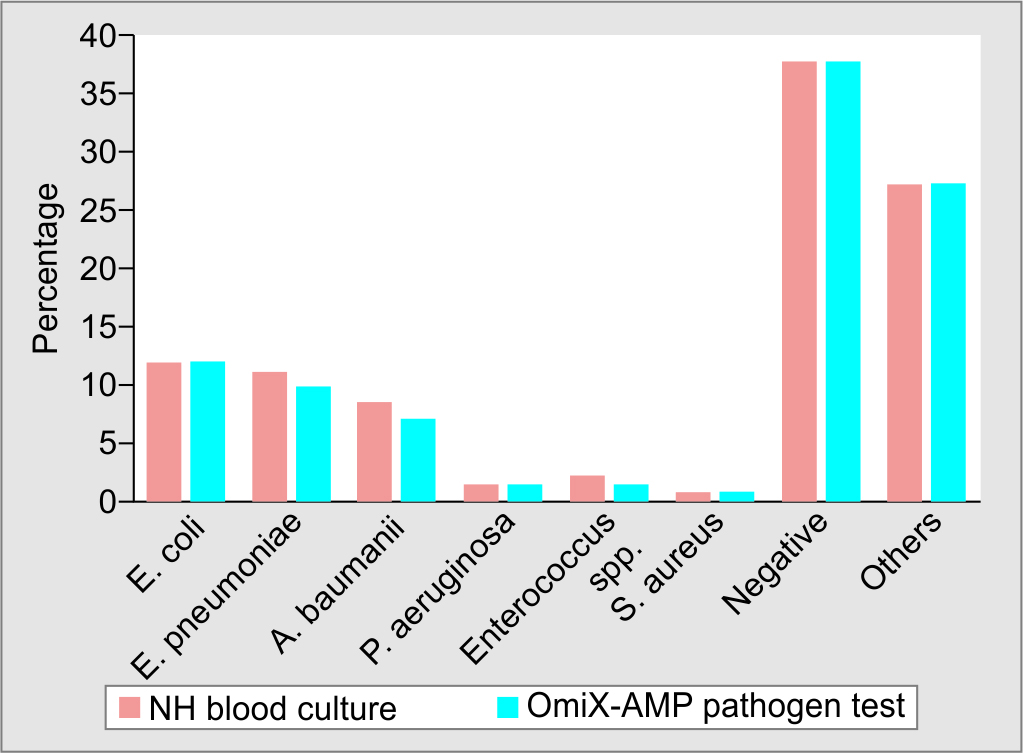 Fig. 1: Number of in-panel and off-panel organisms detected and the correlation between NH blood culture and OmiX-AMP pathogen test

Among the 121 cases which were either of OmiX panel or negative in BC or CoNS in BC, the Cohen's kappa measure was 0.94 with a 95% confidence interval of 0.89–0.97. This is well above the 0.80 threshold that is considered to be a statistically relevant measure of a high level of agreement. In the 143 cases, the Cohen's kappa measure of agreement is 0.74 with a 95% confidence interval of 0.66–0.82. Table 2 illustrated the true prevalence, sensitivity, specificity, and positive and negative predictive values as computed from the 121 cases which include the OmiX panel organisms, negative in culture, and CoNS identified in culture cases. There was nearly 100% specificity, positive predictive value, and negative predictive value for all organisms. However, due to the low prevalence of some organisms, sensitivity was easily affected.

The OmiX-AMP test detected 11 of 12 resistant cases for OXA-4810 and NDM1 with a sensitivity of 91.6% (11/12). Among the four sensitive cases, three were detected negative for NDM and OXA-48 markers with a specificity of 75% and 1 sensitive K. pneumoniae for ertapenem and meropenem was detected as positive for OXA-48 in OmiX-AMP test.

A. baumannii and P. aeruginosa were the two main non-fermenting gram-negative bacteria (GNB) covered in the OmiX-AMP pathogen panel. Among the 12 A. baumannii positive cases, 8 were resistant to both meropenem and ertapenem antibiotics, while the OmiX-AMP test showed that only 4 were positive for NDM marker and the other 4 samples were detected sensitive to the NDM and OXA-48 markers, resulting in false negatives. The two P. aeruginosa positive cases detected in both BC and OmiX-AMP pathogen test were sensitive to antibiotics with 100% specificity.

OmiX-AMP pathogen test detected two of the three monomicrobial Enterococcus spp. positive cases and two of the two polymicrobial infections (detected along with A. baumannii) with a sensitivity of 80% and the other one was detected negative to the OmiX panel, resulting in one false-negative result and found sensitive to antibiotics in both the tests with 100% specificity. Only one S. aureus was detected positive in both BC and OmiX-AMP pathogen test and was found sensitive to antibiotics with 100% specificity. Fig. 2 represents overall carbapenem resistant and sensitive cases detected in NH BC and OmiX-AMP pathogen test. Among the 24 off-panel organisms identified in BC, 24 were detected as negative in the OmiX-AMP sepsis panel. 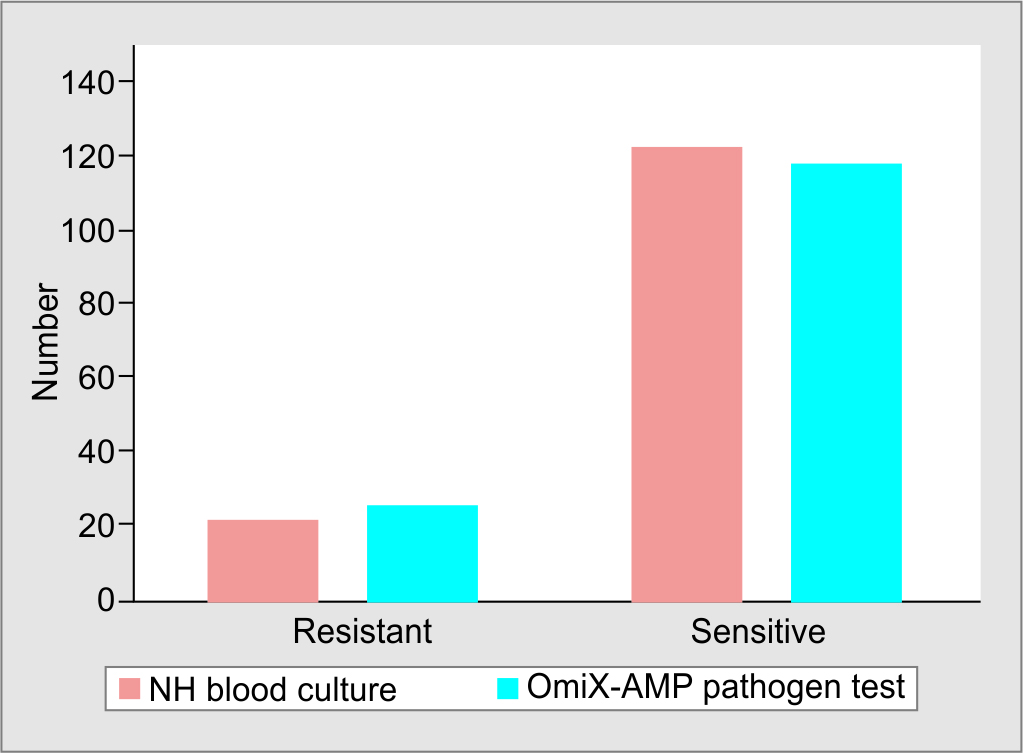 This study reports validation of an in-house developed, room temperature stable OmiX-AMP pathogen detection kit that detects bacterial pathogens in sepsis-related BSI with 95.69% sensitivity and 100% specificity with 96.5% concordance and was able to generate results in an easy-to-use format with a TAT of 4 hours using OmiX Analysis software.

BC results projected that 70% of the detected A. baumannii were resistant to both ertapenem and meropenem antibiotics, whereas OmiX panel detected resistance in only 57% (NDM) of the AMR culture-positive results. This could be due to the stabilized expression of NDM-2 gene in A. baumannii rather than NDM-1 and OXA-48–mediated resistance.27 Prevalence of resistance among the pathogens might differ based on the magnitude of the pathogens and the kind of antibiotics being consumed in a particular geographical area.28 Of the 24 off-panel organisms mentioned in study one, A. nosocomialis was detected as A. baumannii. It could be because the gene signatures of both the organisms display sequence similarity at the genus level as they both belong to Acinetobacter calcoaceticus–baumannii complex, which causes nosocomial infections.29

Apart from age and gender, this study did not include other clinical parameters and severity of illness characteristics because this is the initial clinical validation of the in-house developed OmiX-AMP pathogen test. It would be worth to include a less-prevalent ICU antibiogram—Burkholderia, Streptococcus, Enterobacter, etc., and fungal species like Candida, etc., to the OmiX-AMP panel.