Materials and methods: A prospective observational study was conducted in COPD patients who required mechanical ventilation. ETCO2 was recorded by mainstream capnography along with ABG analysis. An agreement between PaCO2 and ETCO2 was assessed. The effect of various factors on correlation was also studied.

Conclusion: Mainstream ETCO2 measurement accurately predicts the PaCO2 in COPD patients on IMV. However, for patients on NIV, ETCO2 is insufficient in monitoring PaCO2 levels due to weak correlation.

Clinical significance: ETCO2 can be used as a noninvasive modality in intensive care unit for monitoring the PaCO2 in COPD patients on IMV. This can reduce the requirement of arterial blood sampling to a minimum number, in turn, reducing the cost of the treatment and discomfort to the patients.

Chronic obstructive pulmonary disease (COPD) exacerbations are defined as acute worsening of symptoms beyond the day-to-day variability that result in additional therapy.1 The frequency of hypercapnic respiratory failure in patients with COPD is around 20% with an overall mortality of 12% during index admission and may increase to 33% if respiratory acidosis develops after hospitalization.2,3 COPD patients presenting in respiratory failure are managed with mechanical ventilation either through a noninvasive ventilation (NIV) mask or through an endotracheal tube. Multiple arterial blood gases (ABG) are recommended in all COPD patients with acute exacerbation, for monitoring oxygenation, ventilation, and acid-base status. As arterial puncture is painful, there is less patient acceptability for this procedure. An arterial puncture may predispose the patient to develop complications like arterial injury, thrombosis with distal ischemia, hemorrhage, aneurysm formation, median nerve damage, and rarely reflex sympathetic dystrophy. Although venous blood gas analysis has replaced ABG in patients with metabolic disorders, it cannot assess the carbon dioxide (CO2) levels (ventilation status) correctly in pulmonary disorders. The use of less-invasive techniques to assess the ventilation status of the COPD patients has been a topic of interest.

End-tidal carbon dioxide (ETCO2, measured by capnography) is the noninvasive measurement of the partial pressure of CO2 in the expiratory gases at the end of exhalation. The ETCO2 value approximates the PaCO2 level and is displayed on the monitor in mm Hg. The ETCO2 values are expected to be 3–8 mm Hg lower than the normal ABG values of 35–45 mm Hg. The importance of ETCO2 in diagnosing metabolic acid–base disorders in adult patients has been well established.4–8 The purpose of this study is to find an agreement between ETCO2 and PaCO2 in COPD patients presenting with acute exacerbation and to determine whether ETCO2, a noninvasive method, can replace ABG for the assessment of ventilation status of COPD patients. Such a correlation would help in minimizing the cost of management and the need of frequent arterial punctures for the collection of blood.

COPD patients with acute exacerbation who were admitted for invasive mechanical ventilation (IMV) and NIV in an intensive care unit (ICU) and high dependency unit (HDU) of Pulmonary and Critical Care Medicine Department, PGIMS, Rohtak, India, from March 2017 to February 2018 were considered for this prospective observational study. A written informed consent was obtained. Patients with coexistent interstitial lung disease, tuberculosis in the present or past, pulmonary embolism, chest deformity (e.g., kyphoscoliosis), neurological disease, or history of chest trauma were excluded. Then, 0.5–1 mL of blood from radial arteries was collected in preheparinized plastic syringe with 24G needle. A minimum of three samples were analyzed per patient. The first sample was taken immediately at the time of admission to ICU on mechanical ventilation, and the next two samples were taken at the point of 2 hours and 4 hours from the time of admission. The samples were analyzed immediately after collection using the blood gas analyzer (COMBILINE Eschweilers, CL-2022). The blood gas analyzer was calibrated as per the manufacturer's recommendations.

ETCO2 was measured by Nihon Kohden LifeScope VS BSM-3000 series bedside monitors, using mainstream adaptors. TG-920P CO2 sensor kit has two types of adapters (airway or nasal) that can be connected to the patient's respiratory circuit (intubated patients) or directly to the patient's nostrils (in nonintubated patients). CO2 sensor kit is then connected to the monitor. Using TG-920P CO2 sensor kit, measurements assumed that no CO2 gas was present during the inspiration. ETCO2 was measured at the same time of taking arterial blood samples.

Continuous variables were represented as mean and standard deviations, whereas the categorical variables were represented in percentages. The linear correlation between ETCO2 and PaCO2 was performed by Pearson's correlation coefficient. An agreement between ETCO2 and PaCO2 was assessed using the Bland–Altman method. A p value <0.05 was considered as statistically significant. 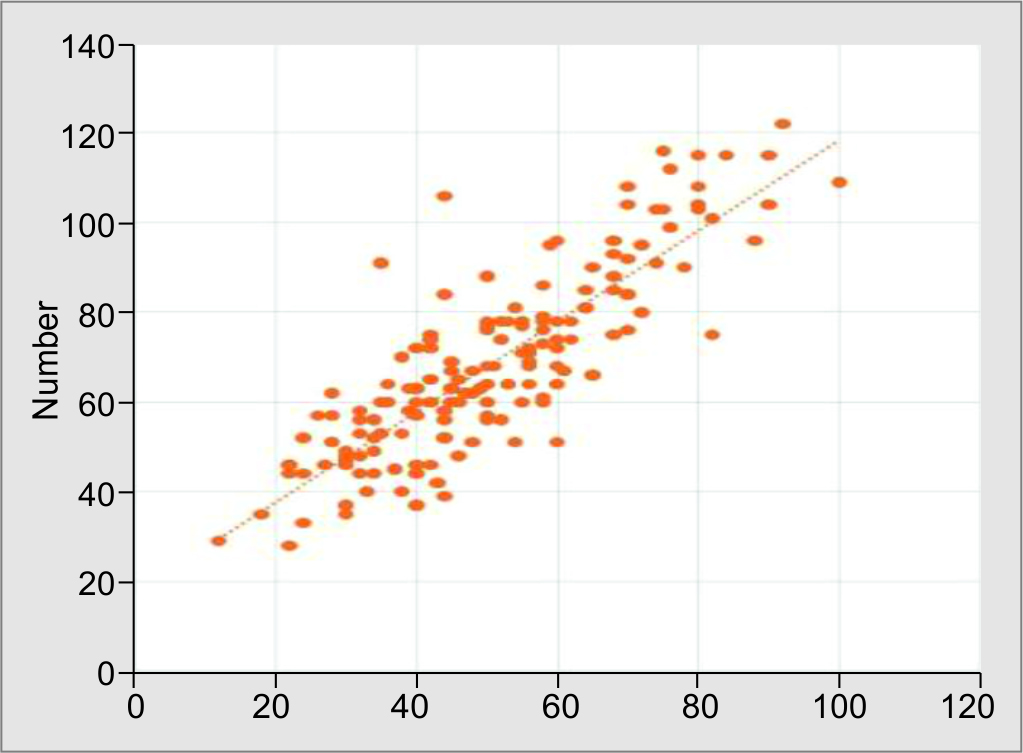 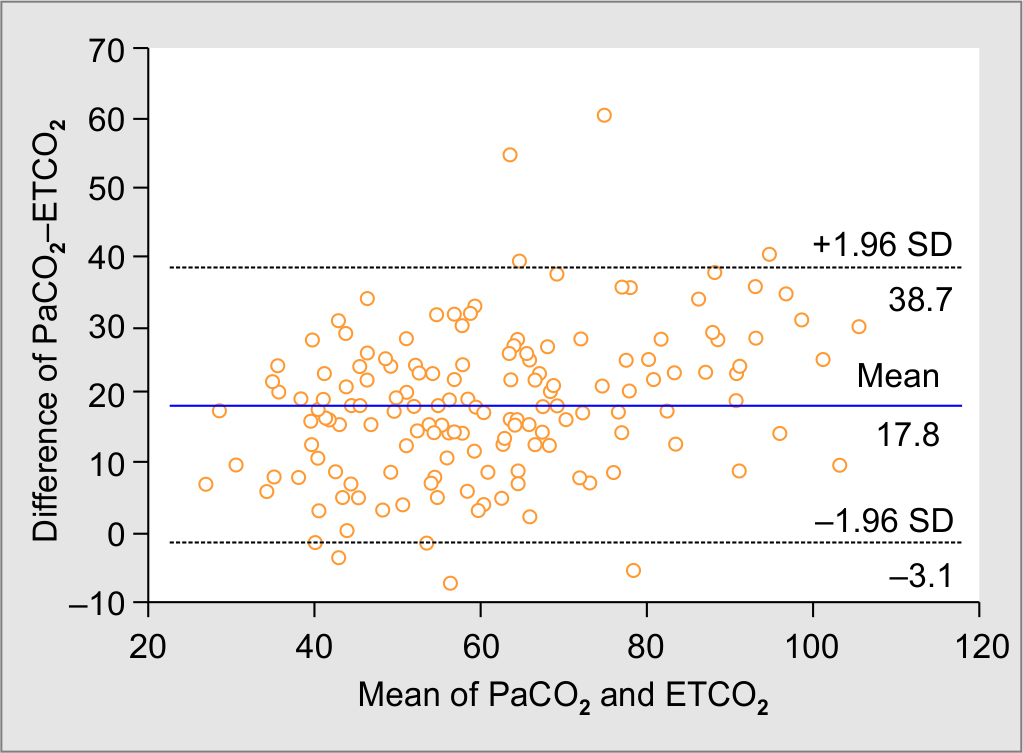 The total number of patients managed through IMV was 73 (73%). Mean PaCO2 and ETCO2 in patients on IMV were 80.38 ± 38 mm Hg and 61.16 ± 16.92 mm Hg, whereas the mean PaCO2 and ETCO2 in patients on NIV were 54.96 ± 8.23 mm Hg and 34.96 ± 7.06 mm Hg. Pearson's correlation coefficient was 0.84 (strong and statistically significant) in intubated patients and 0.58 (weak correlation) in patients on NIV (Fig. 3). On radiological evaluation, bilateral hyperinflation was present in 100% of patients followed by consolidation in 13% of patients. Seventeen patients (17%) were hypotensive and received vasopressors and inotropic support. Thirty-two patients (32%) had pulmonary arterial hypertension. Pearson's correlation coefficient between PaCO2 and ETCO2 in subjects with consolidation, cardiomegaly, hypotension, and raised pulmonary artery pressures was 0.78, 0.86, 0.85, and 0.86, respectively.

Figs 3A and B: Effect of type of mechanical ventilation (invasive vs noninvasive) on correlation of arterial and end-tidal carbon dioxide

COPD patients with respiratory failure requiring mechanical ventilation (invasive or noninvasive) have to undergo multiple ABG analysis for the assessment of oxygenation, ventilation, and acid-base status. Previous studies have found a good correlation between venous and arterial values of pH and HCO3-.9 Oxygenation can be easily assessed by noninvasive pulse oximetry. Ventilation status in the COPD patients is determined by the PaCO2 levels. As both ABG and VBG are invasive procedures, we explored the possibility of using a noninvasive method for blood gas analysis. Considering the fact that the value of CO2 may guide the therapy and assess possible improvements, we tried to establish a correlation between PaCO2 and ETCO2 (a noninvasive modality) for monitoring hypercapnia.

We found a positive, strong, and statistically significant correlation of 0.82 between PaCO2 and ETCO2 in COPD patients with hypercapnic respiratory failure on mechanical ventilation. Bland-Altman analysis also showed a good agreement between the two variables. We also derived the linear regression equation for the calculation of PaCO2 from ETCO2. Although the importance of ETCO2 in diagnosing metabolic acid–base disorders has been well established, patients with pulmonary diseases having a shunt or mismatch of ventilation and perfusion showed variable results. The majority of research in this field has been done in nonintubated patients in the emergency department. Most of them have used sidestream capnography to measure ETCO2. A single study has correlated the PaCO2 and ETCO2 in mechanically ventilated, heterogeneous population of trauma patients and observed a significant correlation between PaCO2 and ETCO2 values (r = 0.89).10 No study has compared PaCO2 and ETCO2 in COPD patients on mechanical ventilation (invasive or noninvasive).

In a study conducted by Yosefy et al., ETCO2 was used to predict PaCO2 levels in patients with respiratory distress in an emergency department.11 Although the patient population was heterogeneous including both COPD (19%) and heart failure patients (75%), they found a good correlation between the two parameters (r = 0.75). A prospective cohort study in patients with acute severe asthma showed a positive concordance between ETCO2 measured by capnography and arterial PaCO2.12 In a pediatric study on nonintubated, moderate-to-severe respiratory distress patients with asthma, bronchiolitis, and pneumonia but excluding chronic pulmonary disease, cardiac disease, and poor tissue perfusion, ETCO2 highly correlated with venous partial CO2 (r = 0.92).13 Kartal et al. measured the ETCO2 using sidestream technique in COPD patients presenting in the emergency department and found only a moderate correlation between PaCO2 and ETCO2 levels, which possibly could be due to measurement by sidestream method.14 However, in a heterogeneous group of emergency patients, Pekdemir et al. did not find any correlation between ETCO2 (measured by both sidestream and mainstream method) and PaCO2. However, their study population was heterogeneous consisting of both patients with and without lung pathology, and measurement errors were noted while recording ETCO2.15

We tried to evaluate the effect of type of mechanical ventilation (invasive vs noninvasive) on the correlation between PaCO2 and ETCO2. Although NIV is currently recommended for the management of patients with acute hypercapnic respiratory failure secondary to COPD, 73% of subjects were on IMV in our study, possibly because ours is a tertiary care referral center and serves the very sick patients. Pearson's correlation coefficient was 0.84 (strong and statistically significant) in intubated patients and 0.58 (weak correlation) in patients on NIV. The reason could be leakage and dead space ventilation in patients on NIV, as the mainstream capnography adaptors are different for intubated and nonintubated patients. Therefore, we concluded that ETCO2 cannot be used to monitor PaCO2 levels in COPD patients on NIV.

We also studied other factors like presence of consolidation, cardiomegaly, hypotension, and raised pulmonary artery pressures, which could affect the blood gases and may affect the correlation between PaCO2 and ETCO2. None of these conditions were found to affect the correlation in a significant manner. Pearson's correlation coefficient between PaCO2 and ETCO2 in subjects with consolidation, cardiomegaly, hypotension, and raised pulmonary artery pressures was 0.78, 0.86, 0.85, and 0.86, respectively. Pekdemir et al. also did not find any effect of different lung pathologies on ETCO2.15 We infer that ETCO2 can be used for monitoring COPD patients on IMV. As not much work has been done in this field, the study requires further evaluation to confirm our findings, preferably in a multicentric blinded study to avoid detection and performance bias.

Limitations of our study were as follows: It was a single-center study and included COPD subjects with coexisting metabolic diseases like diabetes mellitus and acute kidney injury, which affect the metabolic parameters like HCO3- and pH. Another factor could be errors resulting from the functioning of devices, although all the devices used during the study were calibrated by qualified technicians. Performing measurements by a single researcher minimizes the potential for variations that could be caused by many operators. Bias could not be ruled out as the investigator who measured ETCO2 knew the PaCO2 values, although the technician doing ABG analysis was blinded to the PaCO2 results. Lack of a control group as the study was descriptive in nature could have impacted the study results. And lastly, the fact that subgroup analysis was not planned before and was done later from the collected data. The numbers in the noninvasive group were small, which could be the reason for the difference in correlation of coefficient between the two groups, and may be considered a hypothesis-generating point requiring further validation by a larger study.

We found a good correlation between PaCO2 and ETCO2 in COPD patients with acute exacerbations on mechanical ventilation. Mainstream ETCO2 measurement accurately predicted the PaCO2 in COPD patients on IMV and was independent of various coexisting confounding factors like consolidation, cardiomegaly, hypotension, and raised pulmonary artery pressures. ETCO2 can be used as a noninvasive modality for monitoring the PaCO2 in COPD patients who are on IMV. It can reduce the frequency of arterial blood sampling, minimizing the discomfort to the patients and reducing the cost of treatment. However, for patients on NIV, ETCO2 is insufficient in monitoring PaCO2 levels due to poor correlation between the two.