Melioidosis in a Tertiary Care Center from South India: A 5-year Experience

The present study was done with the objective to know the clinical presentation, microbiological features, and treatment outcome of melioidosis patients in our hospital, which is an emerging infection in India, and to know the differences in clinical course and outcome between bacteremic and nonbacteremic patients. This retrospective observational study was carried out over a period of 5 years from January 2015 to December 2019. Thirty-five cases of culture-confirmed melioidosis were identified with age range between 5 and 74 years. A large number of patients (n = 31) presented with uncontrolled diabetes mellitus. Six patients died of septic shock, and the outcome of eight patients was unknown as they were discharged against medical advice. There were no relapses observed. Melioidosis growing as a neglected tropical disease in India warrants awareness among all clinicians across the country.

Melioidosis is an emerging infectious disease in India, mainly reported from coastal regions of Karnataka, Kerala, Tamil Nadu, Pondicherry, and Odisha. Most of the reports are from few large medical centers with well-equipped laboratories and microbiologists. Many new regions and states are being reported with unusual clinical presentations such as infected aneurysms and brain abscess in recent times. We speculate the occurrence of another hidden hot spot in Madurai, south central region of Tamil Nadu. Our tertiary care center in Madurai has more than 2000 beds and receives referred cases from neighboring districts with many inpatient admissions and outpatient visits. Following our first case of melioidosis presenting with osteomyelitis detected in 2015, we are regularly reporting cases of melioidosis.1,2 With continuous interactions with clinicians, we have encountered 35 culture-confirmed cases of melioidosis in a period of 5 years. Detailed clinical and microbiological features of these cases are presented here.

This is a retrospective observational chart review of patients diagnosed with culture-proven melioidosis. Thirty-five patients who were diagnosed with culture-proven melioidosis during the period from January 2015 to December 2019 form the study group. They were classified as bacteremic or nonbacteremic melioidosis, depending on whether their blood cultures were positive or negative for Burkholderia pseudomallei. Information on demography, clinical features, risk factors, laboratory and radiological findings, treatment, and outcome was extracted from the records. Ethics committee approval was taken for this study.

Clinical specimens were processed as per the standard microbiological culture techniques. For blood culture, at least 10 mL of blood was collected aseptically and inoculated into BACTEC (BD) blood culture bottles and incubated in the BACTEC FX40 automated blood culture system. Pus, wound swab, sputum, and endotracheal aspirate were plated on blood, chocolate, and MacConkey agar media. B. pseudomallei was identified by the growth of silver white colonies on blood agar with metallic sheen. Pus from deep abscess was also processed for acid-fast stain, anaerobic bacterial and fungal culture. None of the samples showed acid-fast bacilli, anaerobes, or fungus. Phenotypic identification of B. pseudomallei was performed by a combination of the following tests, i.e., characteristic metallic sheen and wrinkled appearance of colonies, oxidase positive, motile, gram-negative bacilli with bipolar staining with a “safety-pin” appearance, and resistance to polymyxins antibiotics (colistin 10 μg and polymyxin B 300 U disks) along with arginine dihydrolase positive reaction. The identification of isolates was also confirmed by VITEK 2 system. The following antibiotics (ceftazidime, meropenem, trimethoprim–sulfamethoxazole, and doxycycline) were tested by disk diffusion test.

Over a study period of 5 years, 35 cases of culture-confirmed melioidosis were identified. Demography, clinical course, and outcome of all the cases are shown in Table 1. The median age was 50 years (range = 5 and 74 years), of which 28 (80%) were male. Eighty-eight percent (31/35) had underlying risk factors. Diabetes mellitus (31/35, 88%) was the single commonest factor, others being alcoholism (13/35, 37%) and chronic renal failure (8/35, 23%). Case clustering was identified during the months of postrainy season (September to January). There has been a steady increase in the reported cases over the years.

Infection was localized in 16 patients and disseminated in nineteen patients, which include all the bacteremic individuals.

Drug susceptibility to carbapenem, ceftazidime, cotrimoxazole, and doxycycline was 100, 100, 94.2, and 100%, respectively.

Eighteen patients were admitted to intensive care units. Six patients died of septic shock, and the outcome of eight patients was unknown as they were discharged against medical advice due to financial constraints. The average duration of hospitalization was 14 days. As the average time taken for diagnosis by culture was 6.5 days, almost all the patients were on empirical antibiotic therapy. Seven cases that presented with liver and/or spleen abscess were provisionally diagnosed as melioidosis. All other cases were clinically diagnosed as pyogenic arthritis/osteomyelitis, tuberculous lymphadenitis, tuberculous meningitis, and pyrexia of unknown origin. After culture sensitivity reports, intravenous meropenem was administered at the recommended dosage of 25 mg/kg body weight, 8th hourly in 11 cases of septicemia for 2 weeks, and in all other cases, ceftazidime was administered at the recommended dosage of 50 mg/kg body weight, 8th hourly for 2 weeks. Cotrimoxazole was the drug of choice for the eradication phase in most of the patients for 8 weeks. In two individuals with in vitro resistance to cotrimoxazole, doxycycline was administered in the eradication phase. Patients were followed for an average duration of 3 months to 1 year. There were no relapses observed.

Mean age, male gender predisposition, and diabetes mellitus as the most important risk factors and seasonal influence are comparable to other studies reported from India.3,4 Melioidosis is a disease with protean manifestations. This term has been overused as to have become a cliché. In the present study, the most common presentation was septicemia, followed by deep visceral abscess and skin and soft tissue infection. Some of the unusual presentations were two cases of neuromelioidosis and one patient presenting with acute septicemia following road traffic accident.

CNS melioidosis is rare. A recent systematic review found 120 cases reported worldwide with only 16 cases from India.5,6 Only 1.5–5% of cases present with craniospinal manifestations. However, mortality in neuromelioidosis remains high. CNS melioidosis has varied manifestations including encephalomyelitis, cerebral abscess, cranial nerve deficit, and isolated meningitis. In the present study, one of the cases was identified with subdural collection in frontal region and pansinusitis (Fig. 1), and in other individuals, MRI brain showed features of leptomeningitis and rim-enhancing abscess in brainstem and spinal cord (Fig. 2). 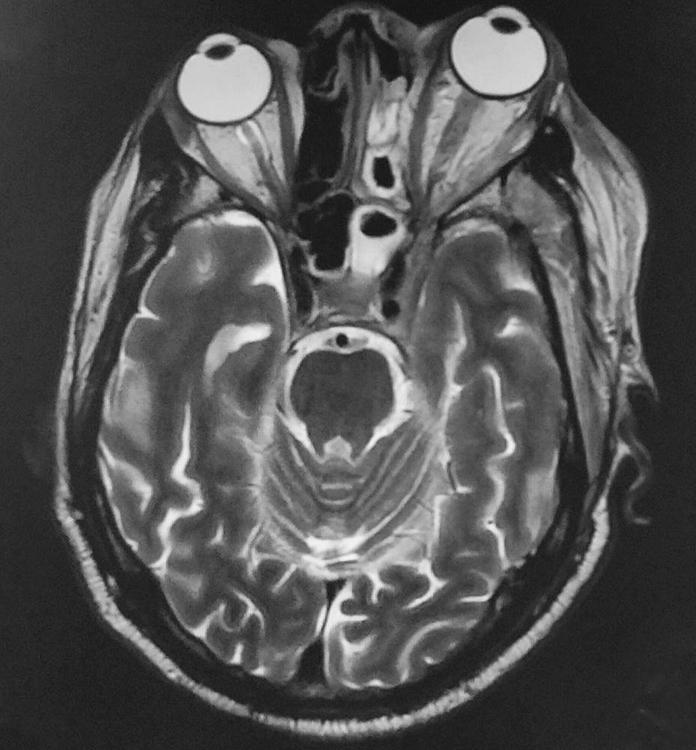 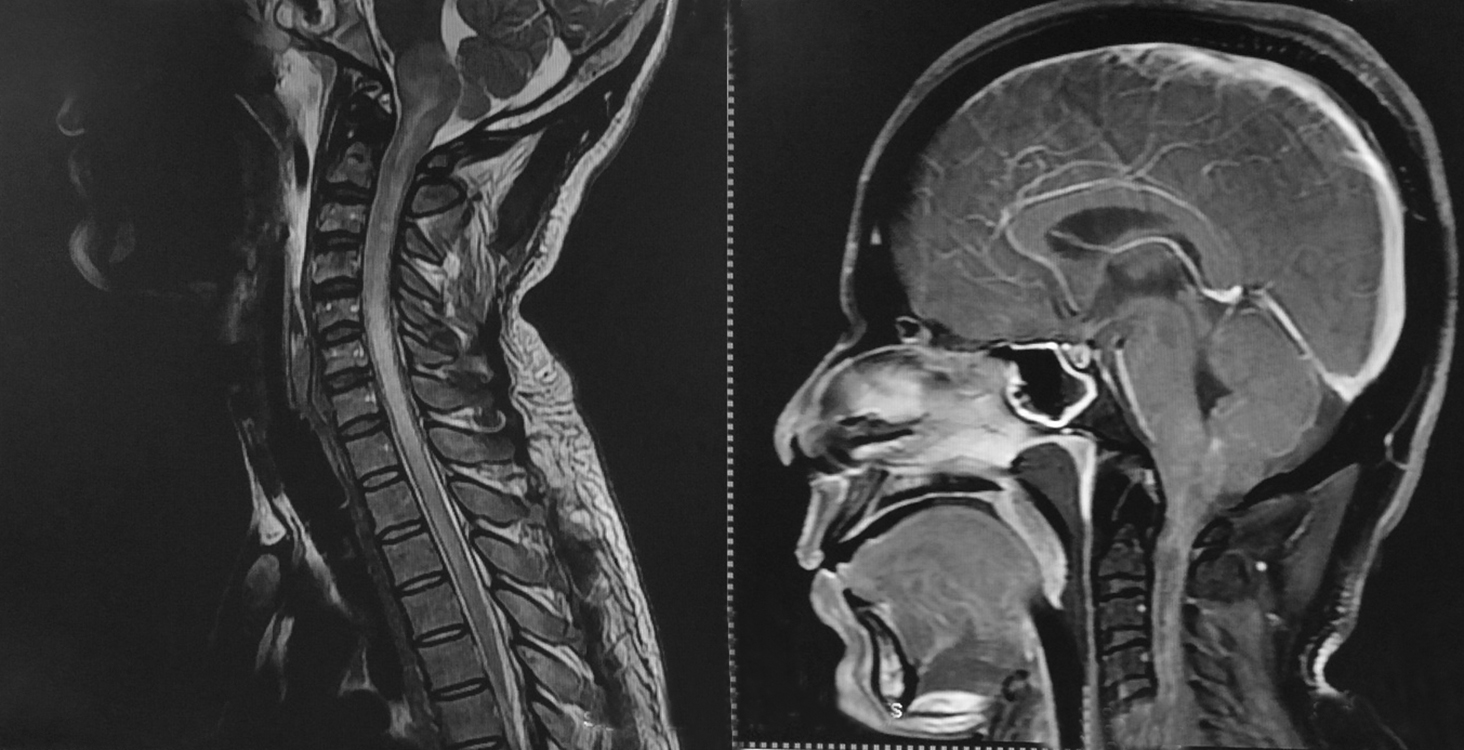 Pediatric melioidosis is another entity that warrants awareness among the pediatricians. Children account for only 5–15% of cases overall.7 Melioidosis is recognized as a pediatric disease in endemic areas. There are many case series and case reports of pediatric melioidosis from India.8 Most common presentation with acute and localized infection involving head and neck in immunocompetent children could be attributed to ingestion of contaminated water. Diabetes mellitus, thalassemia, and cystic fibrosis are recognized risk factors of melioidosis in children. In the present study, we had a 5-year-old immunocompetent girl presenting with parotid abscess and lymphadenitis, which was misdiagnosed as tuberculous lymphadenitis. Apart from diabetes mellitus, other risk factors found in the study include alcohol use and chronic renal failure. Other risk factors looked for include steroid therapy, malnutrition, and COPD.

Despite India being known for its endemicity for melioidosis by a plethora of case reports, case series, and environmental reporting of isolates, it is unfortunate that many clinicians are still unaware of this condition. Most of the reports are from few centers of excellence with well-equipped microbiological laboratories and trained intensivists. Foremost, awareness should be raised among all clinicians and microbiologists even in remote areas across the country. With a fertile environment harmony to the bacteria, booming diabetic population much of them from rural background, and rickety healthcare system, melioidosis is definitely one of the neglected tropical diseases adding to the existing list of India.