Re-expansion pulmonary edema (RPE) is a rare complication that may occur after treatment of lung collapse caused by pneumothorax, atelectasis, or pleural effusion. The amount of fluid drained and the degree of pleural suction influence the development of RPE. We present a case of RPE in a critically ill patient of scrub typhus with rheumatic heart disease, after draining only 800 mL of pleural fluid, thereby proving that the complex cardiac and pulmonary interactions play an important role in the development of RPE.

The development of re-expansion pulmonary edema (RPE) is related to certain heart–lung interactions.1 The clear mechanism of the same is still unknown. The pulmonary capillary damage with increased capillary permeability is the most supported mechanism for RPE. RPE is a rare complication that may occur after treatment of lung collapse caused by pneumothorax, atelectasis, or pleural effusion. Its incidence is very rare <1% and has a mortality of approximately 20%. The amount of fluid to be drained has a wide cutoff between 1.0 and 6.5 L.2 The variables to be considered during drainage of pleural fluid include the hemodynamic stability of the patient, previous cardiac status, and parameters of gas exchange.

A 36-year-old female presented to the emergency department with a history of fever associated with chills and rigor for 1 week, shortness of breath for 2 days, and vomiting for 2 days. On examination, the patient was drowsy with pulse rate of 128/minute, blood pressure of 80/50 mm Hg, respiratory rate of 44/minute, and oxygen saturation (SpO2) of 60% on room air.

The chest X-ray suggested bilateral pleural effusion, and lung ultrasound showed mild to moderate bilateral pleural effusion without any evidence of lung rockets suggestive of pulmonary edema. The patient was ventilated with low tidal volumes with ARDS net protocol, and she gradually improved and was extubated after 3 days. Throughout this period, ultrasound-guided inferior vena cava diameter assessment was used to guide fluid administration and overall fluid balance of about 200 mL on the positive side before extubation. Two days after extubation, i.e., on day 5, the patient again had one episode of hemoptysis (∼100 mL) after which the patient became tachypneic with RR = 44/minute. ABG was done with pH of 7.07, PO2 44.5 of mm Hg, and PCO2 of 63.9 mm Hg. The cause of this deterioration was thought to be of cardiac origin (congestive cardiac failure) and was intubated again with a cuffed PVC ETT of 7.0 mm ID in the first attempt uneventfully. The patient was started on full sedation initially to avoid patient-ventilator asynchrony with SAS targets of 1–2. 2D echocardiogram was repeated after reintubation did not show any further worsening of RV, LV, or PA pressures compared to the previous study. The overall fluid status of the patient was optimal and not overtly positive, which ruled out fluid balance as a contributor to extubation failure. Ultrasound examination of lungs showed bilateral moderate pleural effusion, which was significantly increased in quantity. There were no other findings suggestive of fluid overload, and the treating physician concluded that bilateral pleural effusion could have contributed to the failure of extubation and so planned to insert chest drains to help in the weaning of the patient. Initially, right-side chest tube was inserted with good pain control and 750–800 mL fluid was drained. The fluid sample was sent for biochemical and microbiological evaluation, which came out to be transudative with protein ratio of 0.3. As the right-side chest drain did not help much in weaning from the ventilation, it was planned to insert chest tube on the left side. After insertion of the chest tube, around 800 mL fluid was drained in a quick time of 30 minutes. After drainage, the patient started desaturating and her oxygen saturation started falling. Patient was sedated fully with SAS targets of 1–2 to avoid tachycardia precipitating LV failure as patient is having significant mitral valve disease. Increase in FiO2 and PEEP has no results in improving the oxygen saturation. Chest X-ray revealed bilateral pulmonary edema (Fig. 1A) with refractory hypoxemia. Prone position ventilation (Fig. 2) was decided in view of poor oxygenation status. There was a copious amount of pink frothy secretions from the endotracheal tube without any blockage in the ET tube, and closed suction was started to drain the secretions. The hemodynamics were managed on low-dose noradrenaline infusion. Tracheal secretion was sent for the examination, which came out to be exudative with protein ratio of 0.8. Following prone ventilation, ABG parameters improved drastically over the next 48 hours. T-piece trial was given on the third day, and after 6 days, bilateral ICDs were removed with complete resolution seen on X-ray (Fig. 1B) and she was shifted to the parent unit. 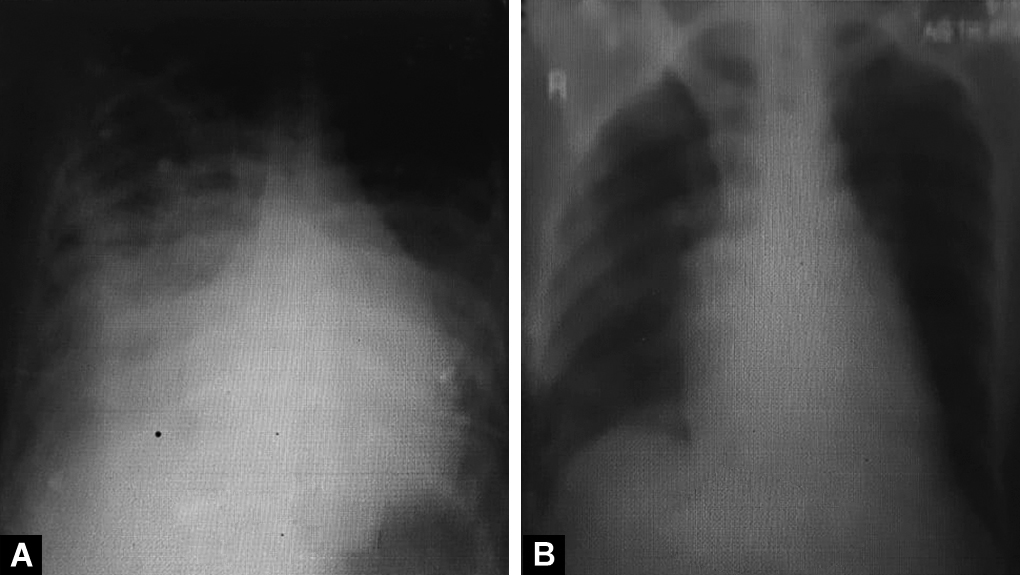 The RPE is considered to occur secondary to pulmonary microvascular injury. The thickening of pulmonary capillary endothelium and basement membrane, which may be due to chronic lung collapse or pulmonary artery hypertension, decreases the flexibility of pulmonary vasculature. These altered vessels are prone to get damaged once stretched following rapid lung re-expansion, resulting in pulmonary edema.3 Various mediators such as interleukin 8 and monocyte chemoattractant protein 1 play an important role in its genesis.4 Factors that increase the likelihood of development of RPE include young age, large pneumothorax, or massive pleural effusion causing a collapse of lung.5

The index case had three risk factors: young age, mitral stenosis, and pulmonary artery hypertension with moderate systolic dysfunction on echo. The presence of these cardiac pathologies precipitated RPE with the drainage of only 800 mL of pleural fluid. The sudden worsening with increased FiO2 requirement and hemodynamic deterioration were supportive of pulmonary edema due to re-expansion, which was confirmed on chest X-ray. 2D echo done around the time of deterioration did not suggest any further worsening of PAH and LV function. Additionally, the tracheal secretion was exudative (0.8) in nature. In 1982, Mariand and Glauser published a study confirming the hypothesis of protein overflow into the alveoli. In this study, the index of protein in the tracheal secretion of cardiogenic (0.5) and re-expansion (0.85) pulmonary edema was evaluated. The highest influence in cardiac patients came from increased hydrostatic pressure, causing the protein index to be much lower than in lung patients, suggesting that capillary permeability was compromised in the latter group. In our case too, the tracheal secretion was exudative, supporting the diagnosis of RPE and excluding cardiogenic cause.

The development of pulmonary edema has always been due to a complex interaction between heart and lung. Pulmonary hypertension and cardiovascular diseases are important risk factors for RPE. Pulmonary hypertension causes significant lung alveolar dynamic alterations, which can precipitate pulmonary edema. Cardiovascular diseases can cause different levels of myocardial contractility deficiency; consequently, hemodynamic repercussions may occur after emptying pleural fluid.4 With thoracentesis, pleural pressure decreases and LV afterload increases, which may lead to LV failure and pulmonary edema, particularly if LV systolic function is already compromised1 as in our case.

The mainstay of treatment of RPE is mainly supportive6 and resolves within 1–3 days completely. The amount of pleural fluid drained should not exceed 1000 mL unless pleural pressures are monitored.7 In patients with associated cardiac comorbidities even lesser amount of pleural fluid, drainage is recommended. Chowdhary et al.8 documented a fatal RPE in a patient with LV compromise. They postulated that lung re-expansion causes shifts in fluid, and as a result, the edematous lung impedes ventricular filling in a situation where the LV is compromised. Significant cumulative fluid balance has a significant role in predicting the extubation success, and it becomes more significant, especially in patients with cardiac dysfunction. Achieving negative fluid balance before the trial of extubation helps most of the times in the success of extubation. Thoracentesis also needs to be given special attention, especially with the compromised left ventricle. Therefore, we suggest that thoracentesis in patients with cardiac comorbidities should be prudently performed. Preventive strategies include the use of low negative pressure (<-20 cm H2O) for suctioning and limiting drainage to not more than 1 L of pleural fluid. Recently, it has been shown that large volumes can be safely drained as long as pleural pressures are monitored. Consequently, drainage with pleural pressure monitoring is advocated, especially in a patient with increased cardiorespiratory risk factors.