Clinical Features and Outcomes of Very Elderly Patients Admitted to the Intensive Care Unit: A Retrospective and Observational Study

Background: In this study, we aim to describe clinical features and outcomes of very elderly (85 years old or older) patients and provide information about predictors of mortality and factors associated with the length of hospital stay (LOS).

Materials and methods: We reviewed retrospectively the files of patients over 85 years old and older who were admitted to the intensive care unit (ICU) of our training and research hospital between January 2017 and December 2018. Demographic and clinical findings, treatment modalities, and outcomes were recorded. The patients who died during the ICU stay were compared to the survivors, and factors associated with mortality and LOS in the intensive care were evaluated.

Results: We reviewed 2350 files, and 218 patients (58.3% females) were included. The rate of mortality was 81.7%. The factors independently associated with a higher rate of mortality were the acute physiology and chronic health evaluation (APACHE) II score; the need for mechanical ventilation (MV), or inotropic support; and the presence of coronary artery disease (CAD) or chronic kidney disease (CKD). A tracheostomy and a blood transfusion were inversely associated with mortality. We found an association between LOS and comorbidities (renal replacement, percutaneous gastrostomy, blood transfusion, and a tracheostomy).

Conclusion: The rate of survival in the intensive care was low among these very elderly intensive care patients. A higher APACHE II score; application of MV or inotropic support; and the presence of CAD or CKD were associated with a higher mortality rate.

As the rate increases for the older adult population, more elderly people with multiple comorbidities are admitted to the intensive care units (ICUs).3 Patients over 65, 80, and 85 years old constitute 50%, 10%, and 5–6% of ICU admissions, respectively.4 These rates vary in each country and with respect to characteristics of ICUs.4 The standards for admitting very elderly patients with short-life expectancies to ICUs are controversial because of the limited number of ICU beds and resources, high costs, and negative outcomes.4,5

The primary goal of this study is to investigate predictors of mortality in very old patients in the general ICU of a tertiary hospital in Turkey. The secondary goal is to define clinical features and predictors of length of hospital stay (LOS) in these patients.

We conducted the study at the Training and Research Hospital, which has 1460 beds and admits more than 80,000 patients annually. We performed the study between January 2017 and December 2018 in the ICU of our hospital (36 beds and nearly 2350 annual admissions). The study took place in an ICU that admitted adult surgical and medical patients, and we reviewed retrospectively the files of very elderly patients. We excluded those who were discharged on patient demand before the end of the treatment, referred to other hospitals, or in whom study variables were missing. If the index patient had more than one admission during the study period, only the first admission was included. We recorded demographic data, referring unit, patient type (surgical/medical), LOS, comorbidities, length of mechanical ventilation (MV), hemodialysis treatment, blood transfusions, need for inotropic support, and tracheostomy and percutaneous endoscopic gastrostomy (PEG) interventions. Surgical ICU patients were defined as those who underwent surgery after admission to the hospital. Patients who needed MV were defined as those who underwent resuscitation and endotracheal intubation for cardiac or respiratory arrest. We also recorded acute physiology and chronic health evaluation (APACHE) II scores on admission and albumin and lactate levels. The data were extracted from the patient files and the hospital information management system. The patients were evaluated in two groups: survivors (those discharged to home or transferred to other wards) and nonsurvivors (those dead during ICU admission). We examined the relationship between the procedures applied in the ICU and LOS. The study protocol was approved by the local ethical committee (Ethical Committee approval number 2019/140).

Statistical analyses were performed by a biostatistician using SPSS Statistics version 17.0 (IBM). The normality of data was analyzed by using Kolmogorov–Smirnov test. The descriptive statistics were reported in mean±standard deviation, medians, and ranges (min–max). Mann–Whitney U test and Kruskal–Wallis test are used to see whether there are average difference between the unrelated groups, accordingly binominal and multinominal variables. OS analyses of the groups were evaluated with Kaplan–Meier curves, and differences were tested with a log-rank test and Cox regression analysis. All comparative tests were 2-tailed, and a p value of less than 0.05 was considered to be statistically significant.

We reviewed retrospectively 256 patient files. Among these, 10 were discharged on patient demand, three were referred to other units before the end of ICU treatment, 15 had missing data (clinical data, 6; laboratory data, 4; admission diagnosis, 3; mortality scoring, 2; laboratory data and mortality scoring, 4), and 10 had more than one admission. The remaining 218 patients were included in the study (Flowchart 1). 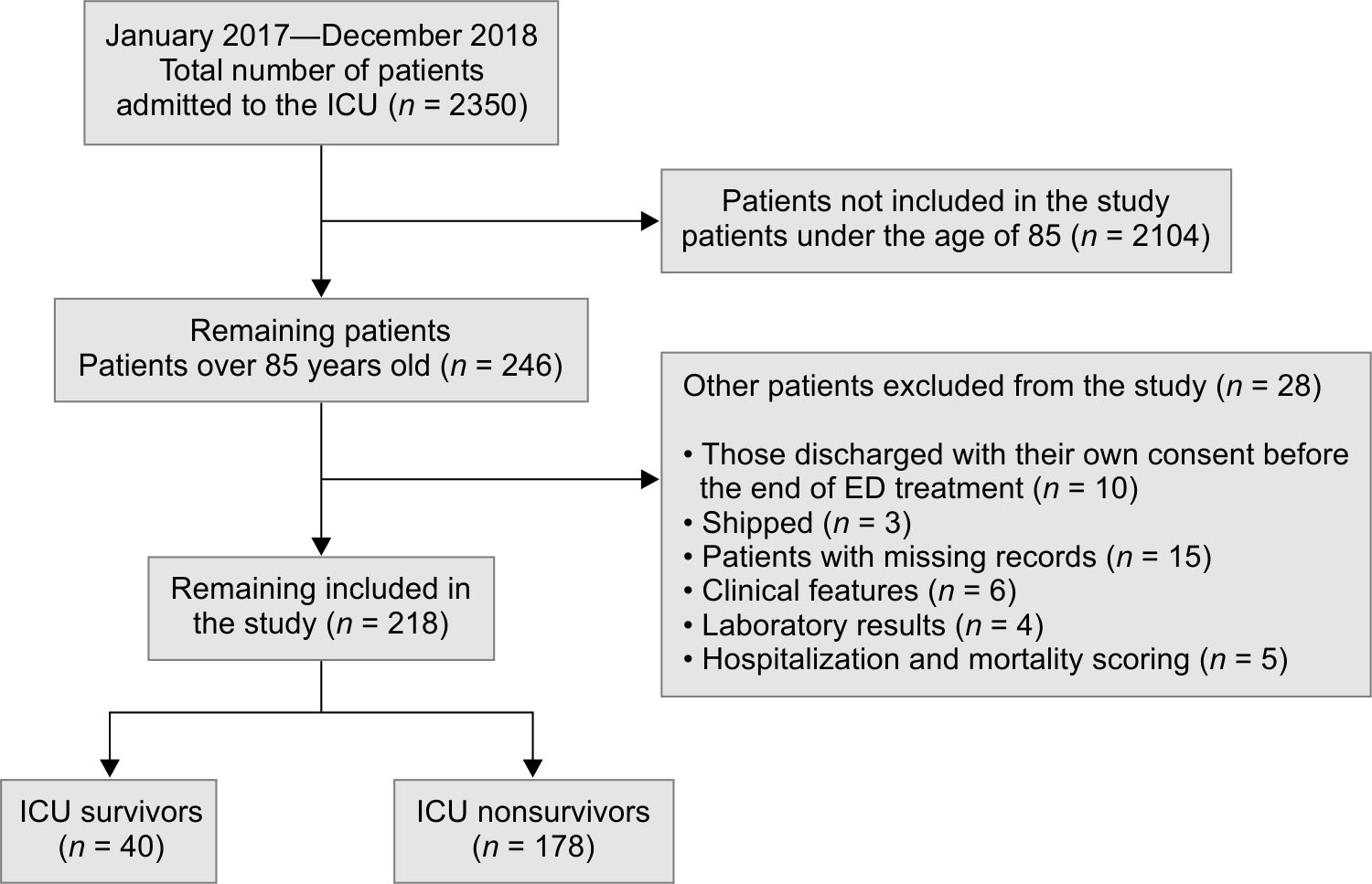 When the primary diagnoses of admission to ICU were examined, it was found that mortality was significantly higher in patients who needed MV (p = 0.001). Intoxication, other medical diseases, and surgery were related to ICU survival. However, the number of these variables is very small, and they could not be analyzed with the regression analysis.

Although very elderly people are more commonly admitted to ICUs, there is a lack of information about their prognoses and outcomes. Several studies have investigated the outcomes of elderly patients in ICUs. In this study, we focused on very elderly patients, because this age segment of the population is the most rapidly growing one,1 the admission rate of these patients to ICUs has increased, and outcomes of treatment in an ICU are commonly poor.4 A controversy exists over whether these patients should be admitted to ICUs.4,8 In many countries, the capacity of health-care systems is at the risk of becoming overwhelmed because many very elderly patients receive end-of-life care in ICUs.8 For these reasons, caring for very elderly patients in ICUs is an emerging health-care problem in Turkey. Furthermore, when we consider the capacity of ICU beds and organization and COVID-19 pandemic process, the present study and similar ones have strategic importance.

Whereas age was reported as a prognostic factor in critical patients in some studies,4,9,10 other studies suggested that disease severity, admission diagnosis, and comorbidities were more important risk factors than age.4,6,7 It is also well known that very elderly patients are admitted to hospital wards more commonly than younger ones and that they have a higher mortality rate.10 The proportion of very elderly patients who are transferred from emergency units to ICUs ranges from 7.9% to 21.7% in several studies.3,6,10,11 In this study, the rate was 9.14%.

Several studies reported that among very elderly ICU patients, women have a better prognosis.6,7,12 Likely, in this study, the proportion of female patients was higher than males (58.3% vs 41.7%). Also, the mortality rate was lower, and the mean LOS was shorter in females. Reinikainen et al.12 reported that male gender was a poor prognostic factor in ICUs, and male patients used nearly two-thirds of ICU beds.

The presence of critical comorbidities and decrease in physiological reserves during the older age period negatively affect the prognosis in ICUs.4,6 In this study, almost all of the patients had at least one comorbidity. In line with the literature, the most common comorbidities were hypertension (48.1%), respiratory diseases (32.5%), and neurodegenerative diseases (29.8%).14

It is important to determine factors related to mortality in very elderly ICU patients and develop management strategies for these patients in order to use ICUs wisely. In this study, the rate of mortality (81.7%) was higher than that reported in other studies. We think that ICU type and the presence of terminal-stage-care patients underlie this high mortality rate. Furthermore, most of the patients (71.1%) were transferred to the ICU from the emergency unit. Notably, almost all of the patients who were transferred from other wards or ICUs (28.9% of the patient population) and most of the patients who required MV after cardiopulmonary resuscitation died. These patients also contribute to the high mortality rate in the present study. Also, many patients died during the first three days after admission to the ICU, and refusal to admit such patients is not possible, according to hospital policy. For these reasons, there is a controversy regarding ICU admission of very elderly patients who have a very high mortality rate. Other studies reported much lower mortality rates for very elderly patients (14.6–56%).10 These studies suggest that the severity of comorbidities rather than age is associated with the rate of mortality; proper management and treatment may improve outcomes.15 We suggest that patient characteristics, ICU type, ICU admission criteria, strategies for end-of-life-care patients, and the experience of health-care personnel are important factors in terms of the rate of mortality.

It is well known that a long-term stay in ICU is associated with a higher mortality rate and a poor outcome.16 However, in this study, most of the nonsurvivors had a shorter LOS (4 days), and the mortality rate was higher in patients with a shorter LOS. Including postresuscitation, critical patients probably contributed substantially to this finding.

Several studies suggested that the need for MV is more common in elderly patients, and MV is associated with a worse prognosis.8 In this study, one-third of the patients were intubated, and most of these patients died in the ICU. The proportion of patients on MV (82.6%), mean duration of MV (12.8 ± 27 days), and mortality rate of these patients (95.6%) are higher than that reported in previous studies.5 These negative outcomes may be due to the inclusion of patients with comorbidities in this study. The rate of noninvasive MV use is low in our country. This may be attributable to the abundance of critical patients requiring MV. It has been postulated that mortality in the very elderly ICU patients may be reduced by using noninvasive MV instead of MV.17

The present study had some limitations. Firstly, it was a single-center study. Local factors, such as ICU type and admission protocols, might have influenced our study results. Secondly, it was a retrospective study; thus, it was not possible to get access to functional capacity measures, such as the frailty index. This should be kept in mind when planning similar studies. Thirdly, the follow-up period of the study was short, and studies with longer follow-up data may provide more clinically relevant information. Fourthly, we evaluated only in-ICU mortality and did not have data about death after discharge from ICU. On the contrary, one strong point of the study was the fact that we admitted medical and surgical patients with various types of comorbidities.

In conclusion, we suggest that APACHE II score, need for MV, CKD, CAD, and need for inotropic support were independently associated with mortality in very elderly patients in ICUs. On the contrary, a tracheostomy and a blood transfusion seemed to be inversely associated with mortality. Notably, the rate of mortality was high, and most deaths occurred in the first three days after admission to ICU. We think that acknowledgment of the factors that have negative effects on clinical outcomes may aid while determining the admission of very elderly patients to ICUs. These patients, who are estimated to have a short survival and poor response to advanced treatment options, seem to have a substantial effect on ICU capacity. As a result, some of these patients might be admitted to end-of-life-care units instead of ICUs to better use the limited capacity of ICUs.

1. World Population Prospects. Population division of the department of economic and social affairs of the United Nations Secretariat, the 2019 Revision. Available at: https://population.un.org/wpp/