How to cite this article: Sehgal IS, Agarwal R, Dhooria S, Prasad KT, Muthu V, Aggarwal AN. Etiology and Outcomes of ARDS in the Elderly Population in an Intensive Care Unit in North India. Indian J Crit Care Med 2021;25(6):648–654.

Background: Whether age would impact the outcomes in subjects with acute respiratory distress syndrome (ARDS) remains unclear. Herein, we study the effect of age as a predictor of mortality in ARDS.

Materials and methods: We categorized consecutive subjects with ARDS as either ARDSelderly (age >65 years) or ARDSnonelderly (age ≤65 years) admitted to the respiratory intensive care unit (ICU) of a tertiary care hospital in North India between January 2007 and December 2019. We compared the baseline clinical and demographic characteristics, lung mechanics, and mortality between the two groups. We also analyzed the factors predicting ICU survival using multivariate logistic regression analysis.

Results: We included 625 patients (ARDSelderly, 140 [22.4%] and ARDSnonelderly, 485 [77.6%]) with a mean (standard deviation) age (56.3% males) of 40.6 (17.8) years. The ARDSelderly were more likely (p = 0.0001) to have the presence of any comorbid illness compared to ARDSnonelderly. The elderly subjects had significantly higher pulmonary ARDS than the younger group. The severity of ARDS was however, similarly distributed between the two study arms. There were 224 (35.8%) deaths, and the mortality was significantly higher (p = 0.012) in the ARDSelderly than the to ARDSnonelderly (ARDSelderly vs ARDSnonelderly, 45 vs 33.2%). On multivariate logistic regression analysis, the baseline sequential organ failure assessment scores, presence of pulmonary ARDS, and the development of new organ dysfunction were the independent predictors of mortality.

Conclusion: The outcomes in subjects with ARDS are dependent on the severity of illness at admission and the etiology of ARDS rather than the age alone.

Acute respiratory distress syndrome (ARDS) is associated with acute onset (<7 days) hypoxemic respiratory failure with bilateral opacities on chest radiograph, either due to the injury to the lung parenchyma or the pulmonary vasculature.1 ARDS is subclassified as mild (200 < PaO2:FiO2 ratio ≤300), moderate (100 < PaO2:FiO2 ratio ≤200), or severe (PaO2:FiO2 ratio ≤100) based on the degree of hypoxemia.2 The mortality increases from 27% to as high as 45% with increasing severity of ARDS.2 Apart from the severity of hypoxemia, several other factors affect ARDS outcomes, including the driving pressure, arterial PaCO2, the strategy used for mechanical ventilation, and others.3–7 There is limited information regarding the effect of age on mortality in ARDS.8–10

Most clinical trials generally exclude elderly subjects with ARDS. In fact, major trials of ARDS do not address the issue of age-related mortality in ARDS.7,11,12 Previous trials have merely mentioned the mean age in comparator groups and have not explored the mortality in the elderly.7,11,12 With increasing global age, the proportion of elderly ARDS is likely to increase in the intensive care units (ICUs).13 Although the principles of ARDS management are similar in elderly patients, the resolution of ARDS and the outcomes might be different in the elderly population. The elderly subjects have an age-related decline of the physiological reserve and a higher prevalence of comorbid illness.14,15 These changes further enhance the stress due to acute illnesses, thereby increasing the risk of mortality in critically ill elderly patients.15,16 We hypothesized that old age would independently affect the outcomes in subjects with ARDS. Our objective was to compare the clinical characteristics and the ICU outcomes of elderly (age >65 years) subjects with ARDS.

We included all individuals diagnosed with ARDS admitted to the intensive care unit of Department of Pulmonary Medicine of our institute between February 1, 2001 and December 31, 2019. We use a specifically designed computer software to prospectively enter the patient data.17,18 We calculated the acute physiology and chronic health evaluation (APACHE II) scores and sequential organ failure assessment (SOFA) scores using baseline values. Each subsequent day in respiratory intensive care unit (RICU) was calendar day timed from 8:00 a.m. to 8:00 a.m. of the next day. We calculated the delta SOFA as described previously.19 We were granted a waiver for informed consent due to anonymized data’s retrospective use by the Institute Ethics Committee.

We used the American-European Consensus Conference criteria for acute lung injury and ARDS (before January 1, 2013) and Berlin definition (after 2013) for diagnosing ARDS.2

All the patient records were screened for study inclusion. We excluded repeat ICU admissions from the analysis. We used a low tidal volume strategy to ventilate all our patients. We used midazolam and atracurium during the initial 48–72 hours to facilitate mechanical ventilation.20 In addition we provided stress ulcer and deep venous thrombosis prophylaxis as per the ICU protocol. The subjects were given enteral nutrition.

We used statistical software package (SPSS for MS-Windows, version 22.0, IBM Inc., Armonk, New York, United States) to perform statistical analysis. We used the Chi-square test and the Student’s t-test (or Mann–Whitney U test), or analysis of variance (or Kruskal–Wallis) for comparing the differences between categorical and continuous variables, respectively. We have described the normally and non-normally distributed data as mean with standard deviation (SD), and median (interquartile range), respectively. We performed a multivariate logistic regression analysis to identify the factors affecting survival. The variables found significant (p <0.1) on the univariate analysis were entered in a multivariate logistic regression model to derive adjusted odds ratio and confidence limits. The level of significance was expressed as probability values (p value) and the odds ratio [95% confidence intervals(CIs)]. We constructed survival curves to study the effect of the category of ARDS on RICU stay using Kaplan–Meier curves. We used the log-rank test to study the differences between the survival curves. We used the mixed model technique for repeated measures analysis of variance to compare the trends in lung mechanics (static lung compliance, PaO2:FiO2 ratio) and ventilatory parameters (PIP, PEEP, plateau pressure, and driving pressure); the within-groups factor was the time (baseline to day 5 of RICU stay), and the between-groups factor was age (ARDSelderly vs ARDSnonelderly). We considered a p-value of less than 0.05 to be statistically significant. 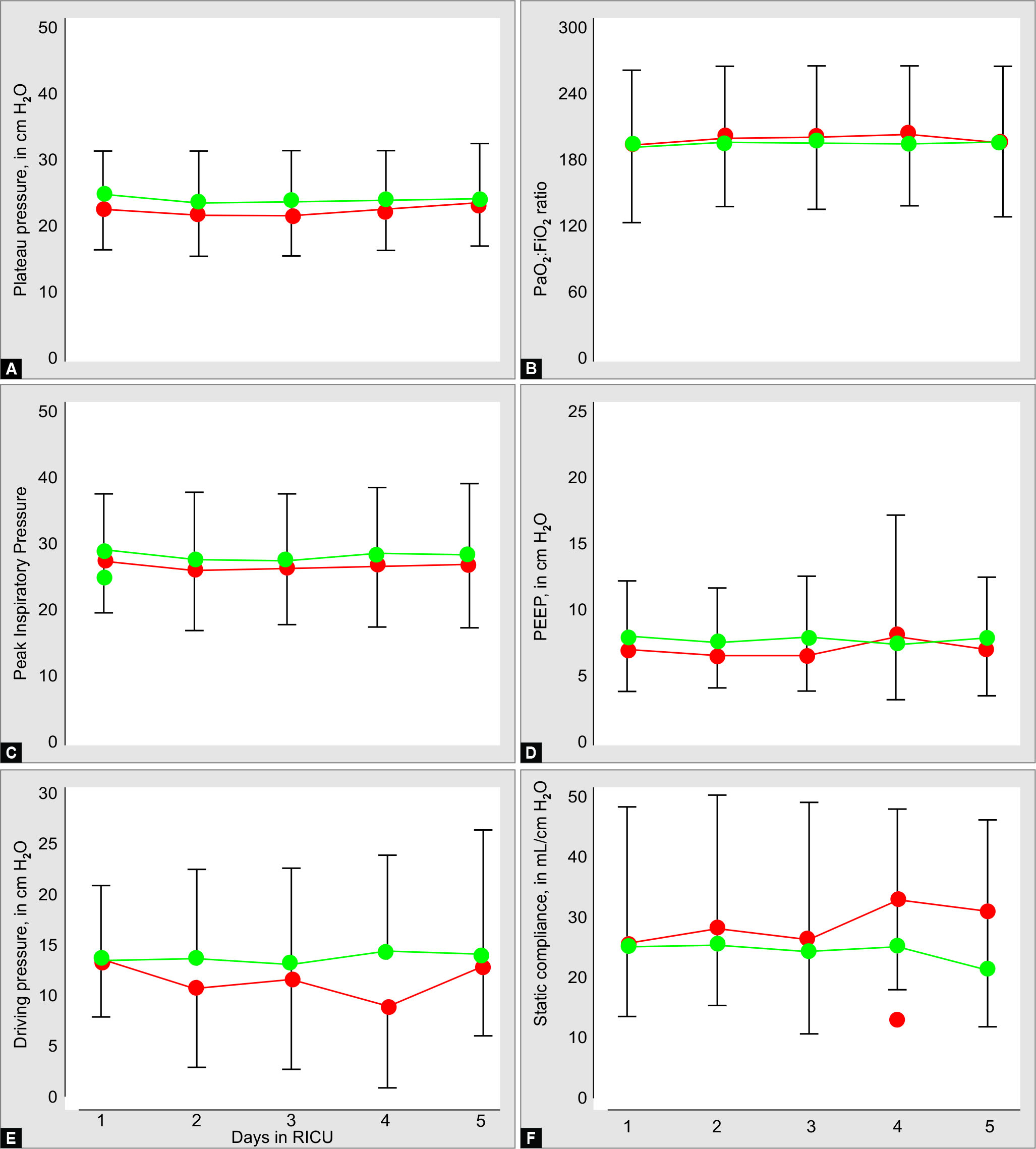 Figs 1A to F: Time course of plateau pressure (left top panel), peak inspiratory pressure (left middle panel), driving pressure (left lower panel), PaO2:FiO2 ratio (right top panel), PEEP (right middle panel), and static lung compliance (right lower panel) from baseline to day 5 in the two groups of patients. The plateau pressure reduced significantly with time (days 0 through 5) in both the groups and significantly lower in the elderly than the younger subjects at all time points. The driving pressure reduced in the elderly and increased in the younger subjects during RICU stay. There were no significant differences in other parameters between the two groups. Circles = mean values; error bar = SD. The hollow circle represents ARDSelderly, and the solid circle represents ARDSnonelderly 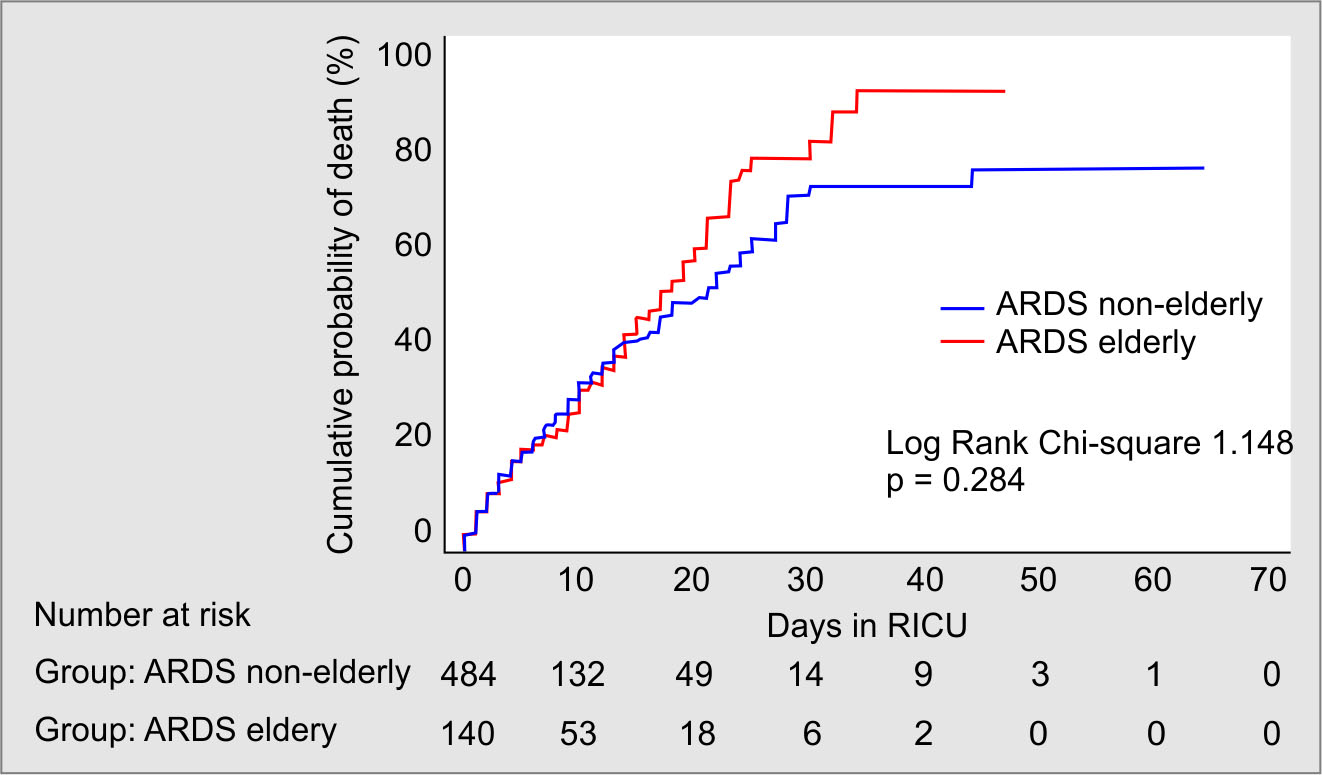 Fig. 2: Kaplan–Meier survival curves comparing the cumulative probability of mortality in ARDSelderly and ARDSnonelderly during intensive care unit stay. There was no difference in time to death between the two study arms (log-rank test)

This study highlights that while the elderly subjects had greater comorbid illnesses and more pulmonary ARDS than the younger subjects, they did not experience higher mortality than their younger counterparts. Only a few studies have investigated the effect of age on outcomes in subjects with ARDS.8,9,21,22 Notably, some of these studies were conducted before the landmark ARDSnet trial.7–9 Thus, a better understanding of the etiology and factors predicting outcomes in elderly subjects with ARDS is required. The proportion of elderly subjects with ARDS in our study was 22% and was lower than the previous studies (up to 60%).8,9,22 The lower prevalence of elderly subjects in our study could be due to the lower life expectancy of the Indian population compared to the western countries. It could also be due to a general perception of poor outcomes and physicians’ reluctance to admit the elderly to the ICU.14

The common etiology of ARDS in the elderly subjects was pneumonia, while sepsis was the most common cause of ARDS in younger individuals. In general, the incidence of pneumonia is higher in the elderly than in the young and is associated with higher mortality.21,23–25 Even in the current study, the presence of pneumonia and pulmonary ARDS was an independent predictor of mortality. The elderly subjects required lower PEEP and driving pressure than the younger individuals, possibly due to the difference in ARDS etiology between the two arms. It has been previously shown that a higher PEEP is required for the extrapulmonary compared to the pulmonary ARDS.26,27 The resolution of respiratory failure and lung mechanics was similar in the two groups; this contradicts that with a poor physiological reserve, the elderly subjects are more likely to require longer periods for recovery than their younger counterparts.15,16 In fact, the ICU and hospital stay were also similar in the two groups.

The mortality (45%) in the elderly subjects with ARDS in our study was lower than those in previous studies (60–85%).9,10,15,28 Higher mortality could be due to the inclusion of subjects with HIV infection, active malignancy, and cirrhosis.9 The lower mortality in the elderly may also be due to the universal use of low tidal volume strategy and differences in ARDS etiology in our study. In another study, the SOFA score and the lung mechanics (PIP) rather than the age were predictors of mortality.21 Another study of ARDS secondary to trauma also demonstrated organ dysfunction at baseline rather than age to be a predictor of survival.22 Even in our study, higher severity of illness at baseline (SOFA score) was independently associated with a higher odds of death. Another factor that predicted mortality in our study was the delta-SOFA score, which signifies the development of new organ dysfunction. An increase in delta SOFA has been previously shown to be associated with an increase in ICU mortality and follows a linear pattern.29

Our study has a few limitations. The study was single-centered with the inherent flaws of a retrospective study design. We used an arbitrary cutoff value of 65 years. The number of very old subjects (>80 years) was less; thus, the results of this study may not be applicable to this age-group. The use of an arbitrary age cutoff is likely to ignore the with-in-age group heterogeneity in organ reserves, functional ability, and the ability to tolerate the various treatment.33 Thus, future studies may consider using an objective measure of frailty, which is more likely to represent the biological age. Finally, we do not have the follow-up details of subjects after discharge from the hospital.

In conclusion, the outcomes in elderly subjects with ARDS are dependent on the severity of illness at admission, the occurrence of new organ dysfunction, and the etiology of ARDS rather than the age. More studies are needed to confirm our findings.

Inderpaul S Sehgal—conceived the idea, performed the statistical analysis, drafted and revised the manuscript, and is the overall guarantor

Sahajal Dhooria—drafted and critically revised the manuscript for intellectual content

Valliappan Muthu—drafted and critically revised the manuscript for intellectual content