A 7-year-old boy was admitted with a history of cough and tachypnea for 1 day. There was a history of a fall from a motorcycle with some abrasions over the left arm. The child was found to have tachypnea and tachycardia and was started on noninvasive ventilation. Auscultation revealed a pansystolic murmur over the precordium. Chest X-ray revealed unilateral pulmonary edema on the right side. Echocardiography showed severe mitral regurgitation (MR) with the tear of the anterior leaflet. The child improved with diuretics and supportive care. After 3 months, he underwent surgical repair of the mitral valve. Traumatic mitral valve tear is quite rare in children. Unilateral pulmonary edema is a feature of MR with eccentric jet and is frequently misinterpreted.

Cardiogenic unilateral pulmonary edema is a rare clinical condition that requires prompt identification and treatment. It is usually confined to the right upper side and is mostly caused by mitral regurgitation (MR). Here, we describe a child with traumatic MR and right-sided pulmonary edema, following blunt trauma. The child was managed conservatively initially, followed by mitral valve repair later.

A 7-year-old boy came walking to the casualty with complaints of cough and fast breathing for 1 day. There was no history of fever. Two days earlier, he fell while riding on the petrol tank of his father’s motorcycle. The child was taken to a nearby hospital, found to be normal except for abrasions over the left chest and arm, given pain relief, and then sent back home. He started having progressively worsening cough the next evening and developed breathing difficulty. Chest X-ray showed right-sided infiltrates, and he was referred to our hospital on suspicion of pneumonia (Fig. 1). In the casualty, he was able to maintain his airway and breathe spontaneously with room air saturation of 88% and had severe retractions. The blood pressure was stable, but he was tachycardic. In the background of recent trauma, bedside ultrasound screening of the abdomen and chest was performed and showed a mild right pleural effusion. Auscultation revealed decreased air entry with crepitations over the right side and a pansystolic murmur with radiation to the left axilla. Echocardiography showed a flail anterior mitral leaflet with rupture of papillary muscles (anterolateral), causing severe MR. He was shifted to the pediatric intensive care unit and started on noninvasive ventilation. Diuretics were started and the distress gradually improved. Once stable, he was started on after-load reduction with enalapril. He gradually became better and was eventually discharged. After 3 months, he underwent definitive surgery for repair of the mitral valve. Postoperatively, he is doing well and is under regular follow-up. 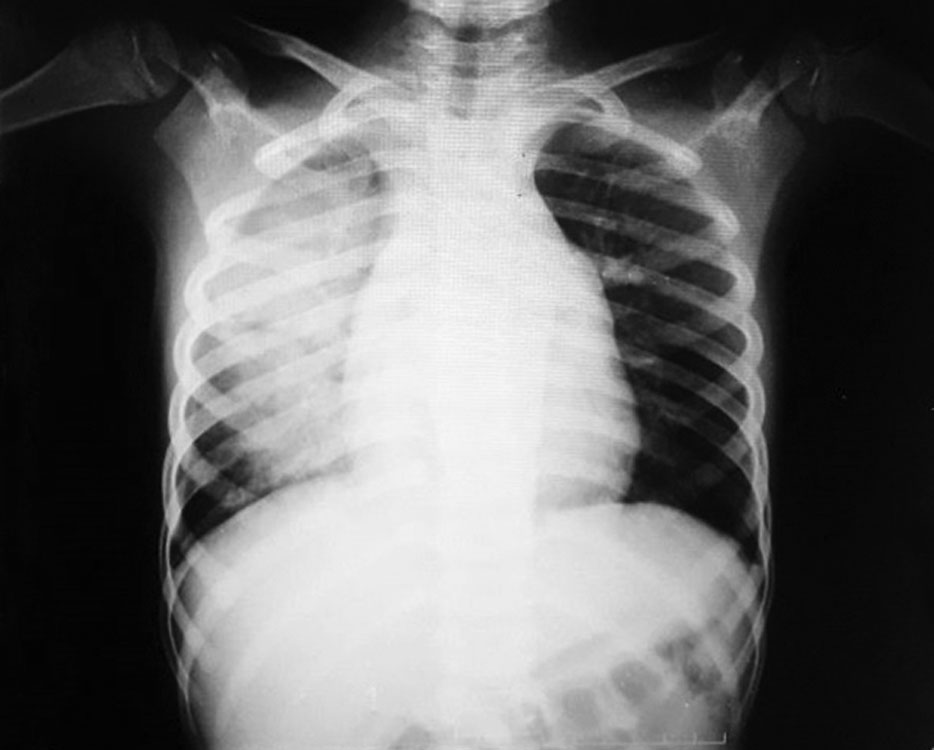 Cardiac injury after blunt trauma ranges from asymptomatic mild cardiac bruise to cardiac rupture.1 Cardiac injuries are frequently underreported and underevaluated in polytrauma as other obvious injuries divert the attention of the physician. Incidence of blunt cardiac injury (BCI) ranges from 20 to 79%.2

Cardiac valve injury, especially mitral, is quite rare in BCI. Parmley et al.2 and Maenza et al.3 did not report a single case of mitral valve injury and any cardiac valve injury, respectively, in their study. Ischemic MR is quite common, whereas traumatic MR has been reported rarely in the literature.4 Traumatic mitral valve rupture occurs when compression happens in the isovolumetric contraction phase when the intraventricular pressure is very high. Traumatic MR is quite rare in children. In 1991, David McCrory et al. mention a 6 years old hit by a car and developing MR, requiring prosthetic valve replacement.5 In 2001, there was a report from Turkey of the ventricular septal defect and MR following penetrating injury to the chest.6 In 2009, Eyup Hazan et al. report a 2 1/2 years old child developing mitral insufficiency due to an isolated rupture of the posterior papillary muscle following the fall of television over his chest.7

Mitral valve injury can involve the valve leaflet, papillary muscle, or the chordae tendineae. Posterior mitral leaflet has a weaker chordae tendineae and is more prone to rupture than the anterior leaflet.10 Papillary muscles are supplied by long epicardial vessels, and hence, injury to these vessels leads to gradual necrosis of the chordae and delayed rupture of the valve. Unilateral pulmonary edema is rare in pediatrics. Unilateral infiltrates in children usually represent pneumonia or atelectasis. The clinician may pursue these diagnoses without realizing that other disease states and procedures in pediatrics predispose to unilateral pulmonary edema. Steven M Audenaurt describes three children with unilateral pulmonary edema as follows:

Mitral valve regurgitation is understood to cause pulmonary edema as a result of increased intravascular hydrostatic pressure. Predominantly right upper lobe edema may be caused by a directed regurgitant jet with resultant local increases in hydrostatic pressure. Schnyder and coworkers reported a 9% prevalence of predominantly right upper lobe pulmonary edema in cases of severe mitral valve regurgitation.13 In 1982, Miyatake et al.14 showed that the direction of the regurgitant jet caused by flail mitral valve leaflets varies depending on the leaflet involved. Roach’s group15 later reported that the jet of regurgitant flow in a patient with a flail posterior valve leaflet is directed specifically toward the right pulmonary vein. But in our child, it was the flail anterior mitral leaflet and the entire right lung was involved.

BCI, particularly valvular injuries, is rare in children. They are often not recognized early as other obvious injuries divert the attention of the clinician. Unilateral pulmonary edema, particularly of the right side, is a feature of MR that is often confused radiologically with infectious etiology. The presence of a new-onset murmur with unilateral lung infiltrates can be present in cardiogenic pulmonary edema due to acute MR following blunt chest trauma.