Upper Airway Obstruction in an Adult: An Unusual Presentation—Dissection of the Cervical Aortic Arch

A cervical aortic arch is a very rare congenital anomaly due to abnormal embryological development of the aorta. It is asymptomatic in the majority and less than a dozen aneurysms in such aortic arches have been reported.1–3 They were initially identified by Reid in 1914.4

A 46-year-old morbidly obese woman (BMI—64 kg/m2; grade 3) presented to an emergency department of a district hospital with acute shortness of breath that rapidly progressed to cardiorespiratory arrest. Following a brief period of CPR as per ACLS protocol, she was revived. Empirically she was diagnosed as community-acquired pneumonia and was subsequently transferred to our intensive care unit for ongoing management.

Her background history includes intellectual impairment and depression. She was never intubated or anesthetized prior to this presentation.

In ICU, she was sedated and ventilated. Chest X-ray was unremarkable except for mild basal consolidation. Over the next 5 days, she was weaned off the ventilator and was successfully extubated electively onto non-invasive ventilation (NIV). The immediate postextubation period was unremarkable, she was sitting in a chair, conversing appropriately with the staff and weaned from NIV to high-flow oxygen.

About 7 hours after extubation, she wanted to rest in bed and the head end of her bed was made flat. Shortly after this, she developed cyanosis, tachycardia, and hypertension, and an emergency call was initiated. A clinical diagnosis of upper airway obstruction was made. She was extremely difficult to ventilate and oxygenate with bag-valve mask, external positive end-expiratory pressure (PEEP), airway maneuvers, and airway adjuncts including a laryngeal mask. Hence, she was emergently intubated using a video laryngoscope by the intensivist. Postintubation arterial blood gas showed profound hypercarbia confirming a period of inadequate ventilation.

Given the clinical diagnosis of airway obstruction, an urgent CT scan of the neck and chest was performed to identify the cause. That CT demonstrated an anomalous cervical aortic arch. Given the unusual anatomy—transthoracic echocardiography was performed demonstrating a dissection flap in the arch. The aortic valve and ascending aorta were normal (type B Stanford classification). Subsequent CT angiogram (Fig. 1) and 3D CT reconstruction of the arch along with its branches revealed multiple anomalies of the branches (Figs. 2 and 3) and a large type-B dissection of the aorta (Fig. 4). This demonstrated a near-total obstruction of the thoracic inlet with associated compression of the esophagus and trachea (Fig. 5). 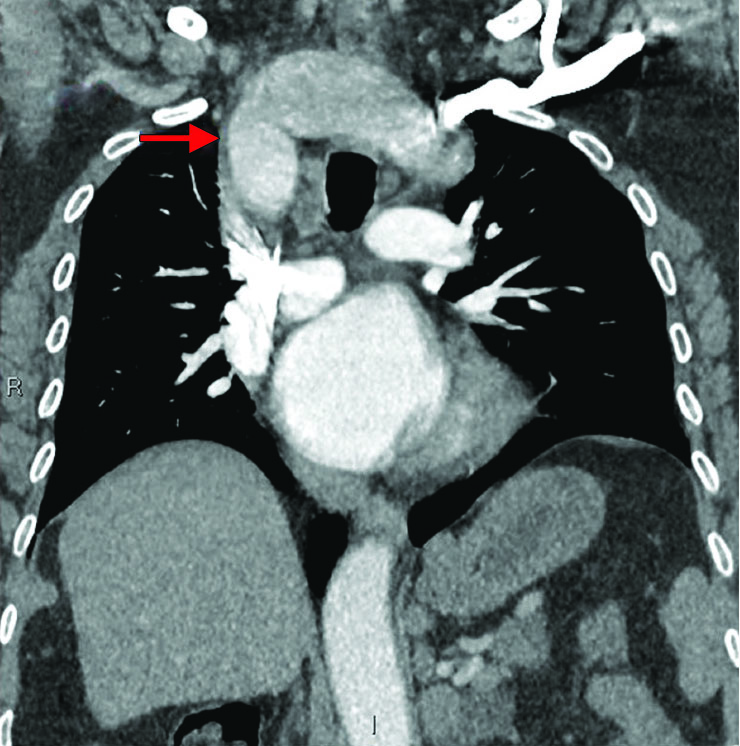 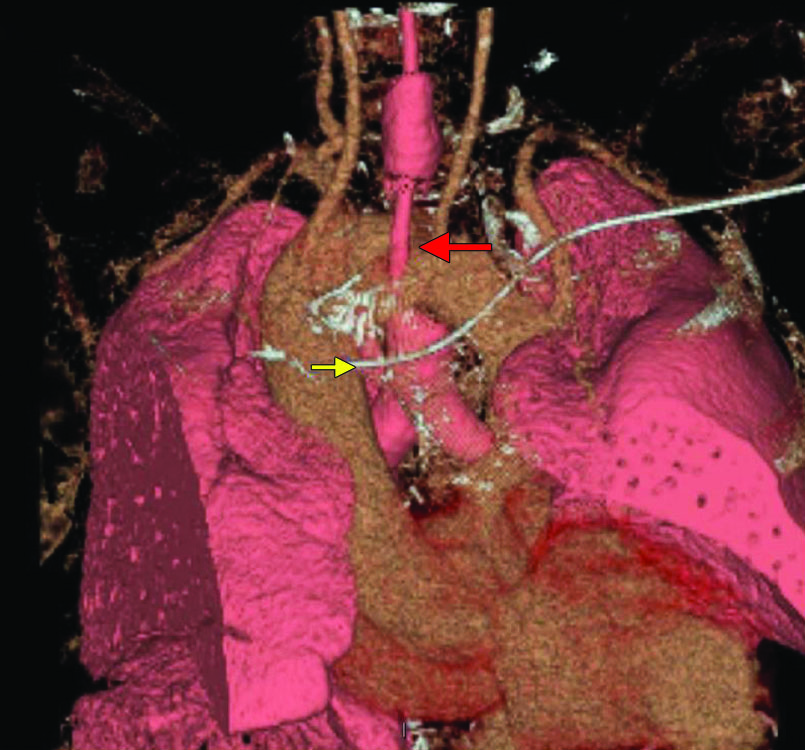 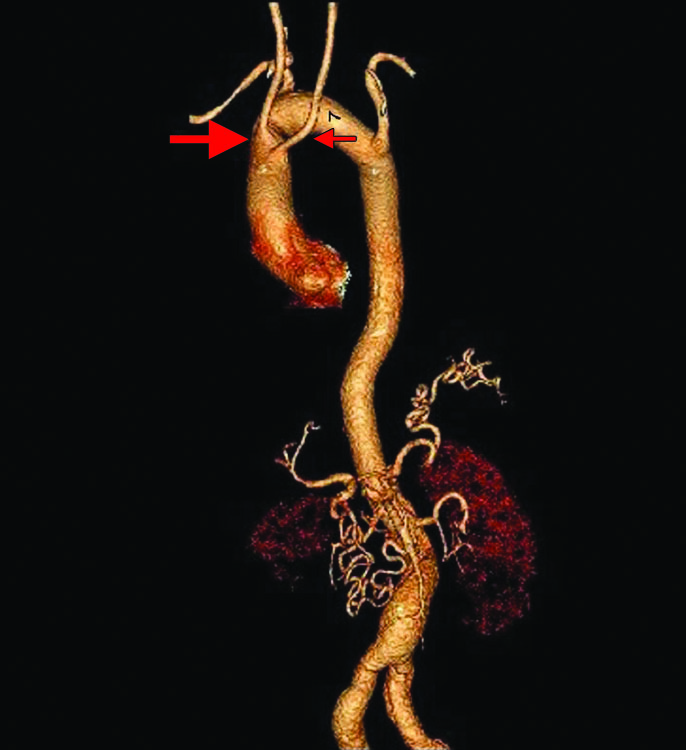 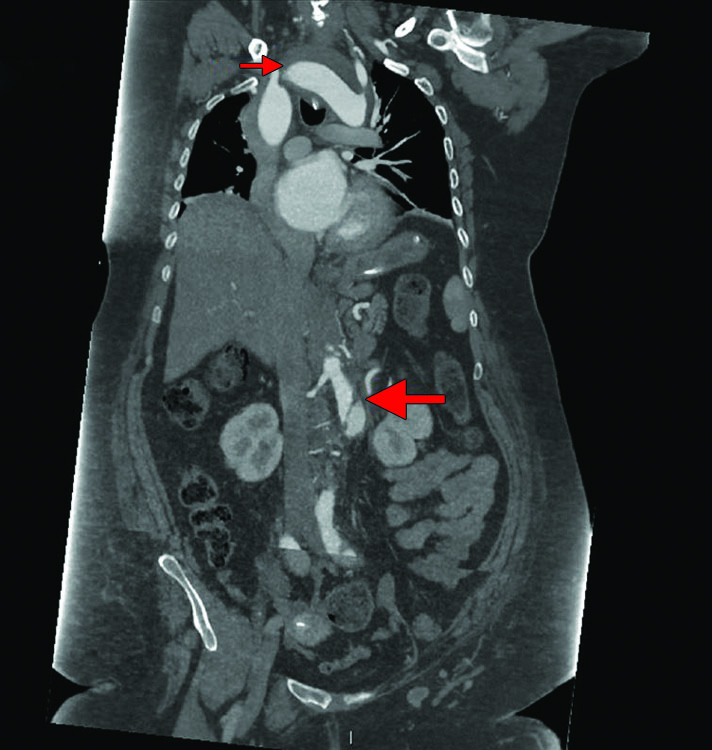 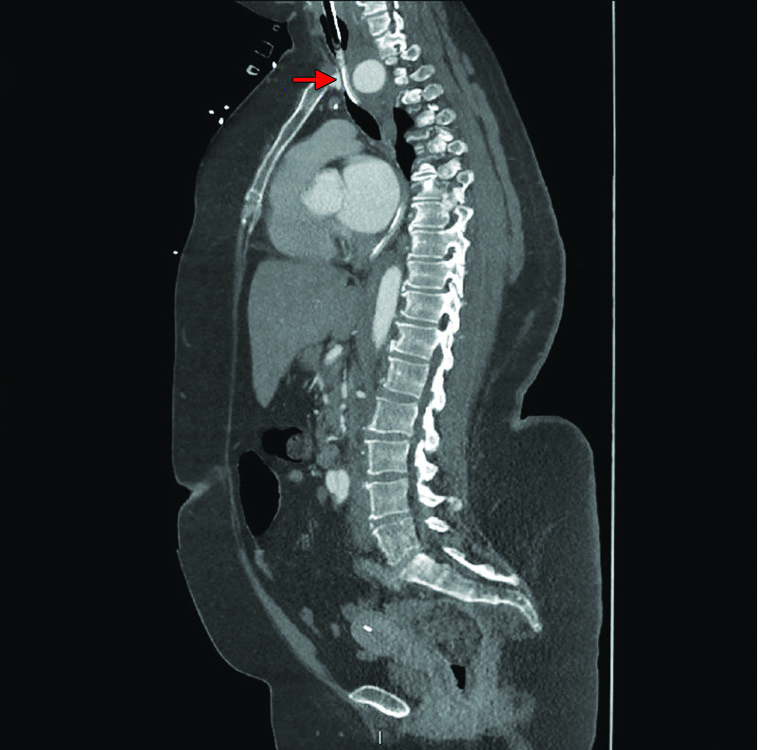 Abnormalities include an aortic arch at the level of the C3 to C4 vertebrae (normal T2–T4) an anomalous left internal carotid originating from the right innominate artery crossing the trachea anteriorly from right to left and the arch itself behind the esophagus, thereby compressing the trachea and esophagus from behind (Fig. 3). A proximal dissection flap was identified in the arch and an extensive intramural hematoma was identified extending into the left common iliac artery (Fig. 4). There was no extension of the dissection into the carotid arteries.

Patient recovered well from the period of hypoxia, neurologically appropriate. She was transferred, still intubated, and ventilated, to another higher facility for an assessment by the multidisciplinary complex airway team. After extensive discussions, the patient was deemed inoperable and was extubated and palliated.

Cervical aortic arch is presumed to arise from either persistence of the second or third branchial arches with regression or failure of the caudal migration of a normally developing fourth arch.5

Review of the previous cases of cervical aortic arch aneurysms showed that all the reported cases were female. Some of the cases were asymptomatic,6 while others presented with dysphagia,1 cough or hoarseness,2 dizziness,7 stroke,3 and traumatic rupture of the aorta.3

Genetic correlation of these anomalies was identified with 22q11 microdeletion syndromes.8 These are associated with heart defects, cleft palates, hypocalcemia, scoliosis, hearing loss, laryngotracheal anomalies, and neuropsychiatric disabilities.8 Although our patient did not have all features described above, she did have bipolar illness and intellectual impairment.

Our case has demonstrated that abnormalities of the great vessels, like a high aneurysmal aortic arch with its aberrant branches, can cause compression of trachea anteroposteriorly resulting in airway obstruction precipitated by dissection.

This case is unique in that prior to this first presentation with a respiratory arrest following acute upper airway obstruction, she was asymptomatic. A CT pulmonary angiogram performed earlier incidentally demonstrated an asymptomatic cervical arch with an aneurysm. The cause for her aneurysm could not be established as she did not undergo an autopsy. In the absence of a history of trauma or hypertension, the dissection was deemed to be spontaneous. We believe that dissection is the cause of acute upper airway obstruction in this patient.

Consent to write and report this case was obtained from the patient’s brother.