Clarithromycin is a commonly used antibiotic. Neuropsychiatric adverse effects are recognized, but the occurrence of seizures and status epilepticus (SE) has been rarely reported. We report the case of an elderly patient who developed generalized tonic-clonic seizures (GTCS) followed by nonconvulsive status epilepticus (NCSE), 2 days after starting clarithromycin. Other causes of seizures were excluded by magnetic resonance imaging (MRI) of the brain, CSF analysis, and routine laboratory studies, thus establishing the causal role of clarithromycin. Clarithromycin was stopped and parenteral antiepileptic drugs started, which controlled the status. In the elderly, symptoms like delirium, drowsiness, confusion, or seizures can occur due to an underlying systemic disease, brain pathology, or adverse effects of medications, all of which must be correctly differentiated. This case illustrates the occurrence of seizures and SE due to clarithromycin. Awareness about this possibility will help physicians recognize and treat such situations promptly.

Clarithromycin is a commonly used macrolide antibiotic indicated in a variety of infections. It has been reported to cause neuropsychiatric adverse effects.1,2 Acute delirium and psychosis have been prominent observations.3–5 Nonconvulsive status epilepticus (NCSE) due to clarithromycin therapy has been rarely reported. NCSE often manifests as delirium or confusional states. Diagnosis in the setting of infections, particularly in the elderly, requires a high index of suspicion. Identification of the cause of NCSE is of paramount importance, especially if it is drug-induced, so that immediate corrective measures can be adopted. We report the case of an elderly patient who developed generalized tonic-clonic seizures (GTCS) followed by NCSE due to clarithromycin and discuss its presentation, diagnosis, and management.

A 71-year-old hypertensive, nondiabetic gentleman had been experiencing epigastric discomfort for a few weeks for which he underwent gastro-duodenoscopy. He was diagnosed to have a duodenal ulcer and started on amoxicillin 1500 mg, clarithromycin 1000 mg, and pantoprazole 80 mg daily in two divided doses. Two days later, he suddenly developed two episodes of unprovoked GTCS. He had no fever, headache, altered sensorium, or any other relevant antecedent symptoms. There was no history of any other neurological symptoms. He was investigated further for the seizures. Magnetic resonance imaging (MRI) of the brain (1.5 Tesla) was normal except for few nonspecific white matter signal changes. Routine hematological and biochemical parameters were normal. Electroencephalogram (EEG) was also normal (Fig. 1A). He was started on levetiracetam 500 mg twice daily and discharged home. Gastroenterology medicines were continued. 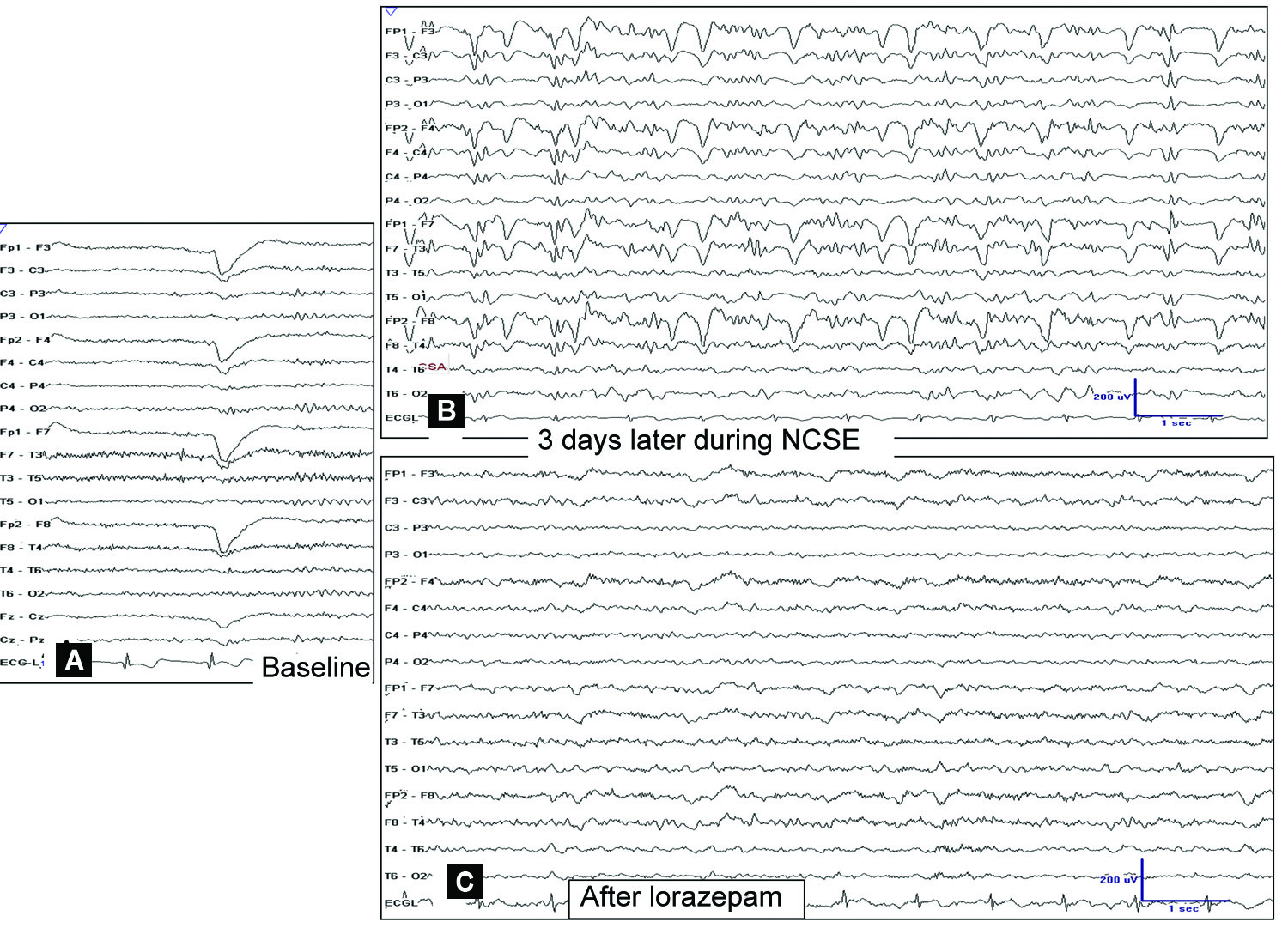 Figs 1A to C: EEG was done in a 71-year-old with two episodes of seizures within 24 hours depicted in the bipolar montage (1–70 Hz). Initial EEG was normal (A). Three days later when he presented with a confusional state, EEG was repeated, which showed features of NCSE in the form of generalized rhythmic theta activity intermixed with spikes (B). He was treated with injection lorazepam that controlled the NCSE with the reappearance of background activity with an increased nonspecific slowing in comparison with baseline (C)

Three days later, he was brought back with prolonged confusional state. On examination, he was disoriented, confused, poorly comprehending, and responded inappropriately. He was afebrile and had stable vital parameters. He was suspected to be in NCSE, and an emergency EEG was done, which confirmed NCSE (Fig. 1B). He was treated with injection lorazepam that controlled the status (Fig. 1C). He was continued on injection fosphenytoin, injection levetiracetam, and subsequently oral clobazam was also added. Repeat MRI of the brain showed no new findings. CSF analysis was normal. Biochemical and hematological tests were again normal. As no other etiology was evident, the cause of NCSE was attributed to his medications. Since amoxicillin has a very low potential to cause neurotoxicity, clarithromycin was the likely causative and was withdrawn. Continuous EEG monitoring was done, which showed intermittent nonconvulsive seizures during the next 24 hours. He improved over the next 36 hours with no further clinical or electrographic seizures. He remained seizure-free subsequently, and his antiepileptic medications were gradually tapered.

Drug-induced SE is rare and accounts for less than 5% of all cases of SE.6 Various classes of antibiotics, immuno, and chemotherapeutic agents have been associated with neurotoxicity and seizures. Geriatric patients are at higher risk for adverse drug reactions due to age-related pharmacokinetic alterations.7

Clarithromycin neurotoxicity has been attributed to direct neurotoxicity of the active metabolite 14-hydroxyclarithromycin, alterations of cortisol and prostaglandin metabolism, and inhibitory action on glutaminergic transmission. Clarithromycin-induced allosteric modulation of GABAA receptors with increased cellular excitability may be another reason for seizures.8–10

Drug-induced neurotoxicity presents as hallucinations, psychosis, confusional states, and rarely NCSE. In the elderly, systemic infections, metabolic derangement, and intracranial infections too have a similar presentation. Therefore, a high index of suspicion is required in such situations. EEG is essential in establishing the diagnosis of NCSE and monitoring therapy. Prompt withdrawal of the offending agent along with routine measures for managing SE has yielded good outcomes. Limited data suggest using benzodiazepines as initial therapy followed by phenobarbitone as second-line therapy for drug-induced SE.11 Awareness about the neurotoxic adverse effects of antibiotics like Clarithromycin will help physicians manage such situations effectively.

The study was conducted ethically in accordance with the World Medical Association Declaration of Helsinki.

Written informed consent was obtained from the patient to publish this case report along with the accompanying EEG images. The patient’s identity has been concealed.