Pressure support is one of the respiratory parameters of mechanical ventilation that provides a certain pressure during inhalation to support the patient’s spontaneous breathing.7–9 The most accurate pressure support adjustment method is monitoring the WOB. WOB is measured by invasive techniques that are not available in ICUs; therefore, the respiratory indices could probably predict the patients’ WOB to adjust the pressure support.10 For this reason, in ICUs, pressure support is adjusted in a way so as to reduce the respiratory rate (RR) to less than 30 per minute and increase the tidal volume (VT) to 4–8 mL/kg. The only discussed adjustment technique in articles and references is also the patient’s RR and VT,3,11–16 which is apparently not the most appropriate noninvasive method of adjusting pressure support, because the correlation of WOB with the RR and VT separately is less than its correlation with rapid shallow breathing index(RSBI).17 In RSBI, VT and RR are merged, and the number obtained from this index examines the depth and the number of breaths at the same time, and values exceeding 105 breaths per minute per liter indicate respiratory distressin the patients;18 as a result, according to the results of a study, WOB is more correlated with RSBI than with VT and RR,17 and any parameter or index that is more correlated with WOB (as the most accurate invasive method of pressure support setting) is probably a more accurate noninvasive method for adjusting pressure support, and it mayreduce patient’s respiratory distress more and faster.19

Few studies have been done to determine the most accurate pressure support adjustment method.9,10,17,20 Further research is, therefore, necessary in this field. Thus, the present study was conducted to compare the effects of VT and RR and RSBI adjustment methods on respiratory distress in mechanically ventilated patients in ICUs.

This two-group and three-stage clinical trial was conducted in ICUs in 2020. The study objectives were explained to the patients’ companions, and those who wished their patients to participate in the study signed the informed consent form. The study inclusion criteria were: Being an adult, treatment with pressure support ventilation, no chronic obstructive pulmonary disease, no acute respiratory distress syndrome,21,22 the number of breaths exceeding 30 per minute, VT <4 to 8 mL/kg, RSBI >105 breaths/min/L, respiratory distress observation scale(RDOS) score >3, and receiving no neuromuscular relaxants.5 The study exclusion criteria were: The patient’s transfer to other wards or hospitals while adjusting the pressure support, or cardiac arrest or hemodynamic instability in the patients.

Firstly, a three-part questionnaire was completed by the researcher for each patient who participated in the study. The first part dealt with background information, including age, gender, Acute Physiology and Chronic Health Evaluation (APACHE) IV score, etc. The second and third parts examined the RSBI and RDOS scores of the patients. The APACHE IV score was determined by an ICU specialist (research collaborator).

The initial sampling was carried out by the simple nonrandom method. The participants were then divided into two groups by the ICU specialist (research collaborator) through random allocation; thus, patients’ details were input into the minimization software and included age, gender, body mass index (BMI), use of analgesics and sedatives, APACHE IV score, and positive end-expiratory pressure (PEEP). Based on the results provided by this software, 23 patients were assigned to the control group and 33 patients to the trial group. Minimization software is a method for randomization of samples, and while randomizing, it distributes confounding variables, which were input into the minimization software, between the two groups in such a way that the two groups have the least difference in terms of these variables. Pressure support was then adjusted by the ICU specialist (research collaborator); it was adjusted according to the VT and RR in the control group RSBI in the trial group. Pressure support was adjusted such that the RR was <30/minute and the VT was 4–8 mL/kg in the first group, and RSBI was <105 breaths/min/L in the second group. In this study, in both groups, at the beginning, the pressure support level was increased by 2 centimeter of water, and then, VT, RR, and other criteria mentioned in the questionnaire were monitored. If the patient was suffering from respiratory distress yet and needed more pressure support, then the pressure support was increased by 2 centimeter of water again, and this process continued until the patient’s respiratory distress resolved; the maximum allowable pressure support level was 25 centimeter of water. RSBI and RDOS were measured again by the researcher 15 and 30 minutes after adjusting the pressure support. The reason for measuring respiratory signs at 15-minute intervals was that in a study conducted by Aliverti et al., theeffect of four levels of pressure support on the respiratory signs and indices was measured at 15-minute intervals.19 The present study was conducted in a double-blind format, since the researcher who examined the patients’ respiratory distress and participating patients had no knowledge of the pressure support adjustment method used.

The RDOS has been used in different studies, and its reliability has been confirmed with Cronbach’s alpha of 0.64.5,23 Once sampling ended, data were analyzed in SPSS-22. Flowchart 1—CONSORT flow diagram shows the process of inclusion of the patients. 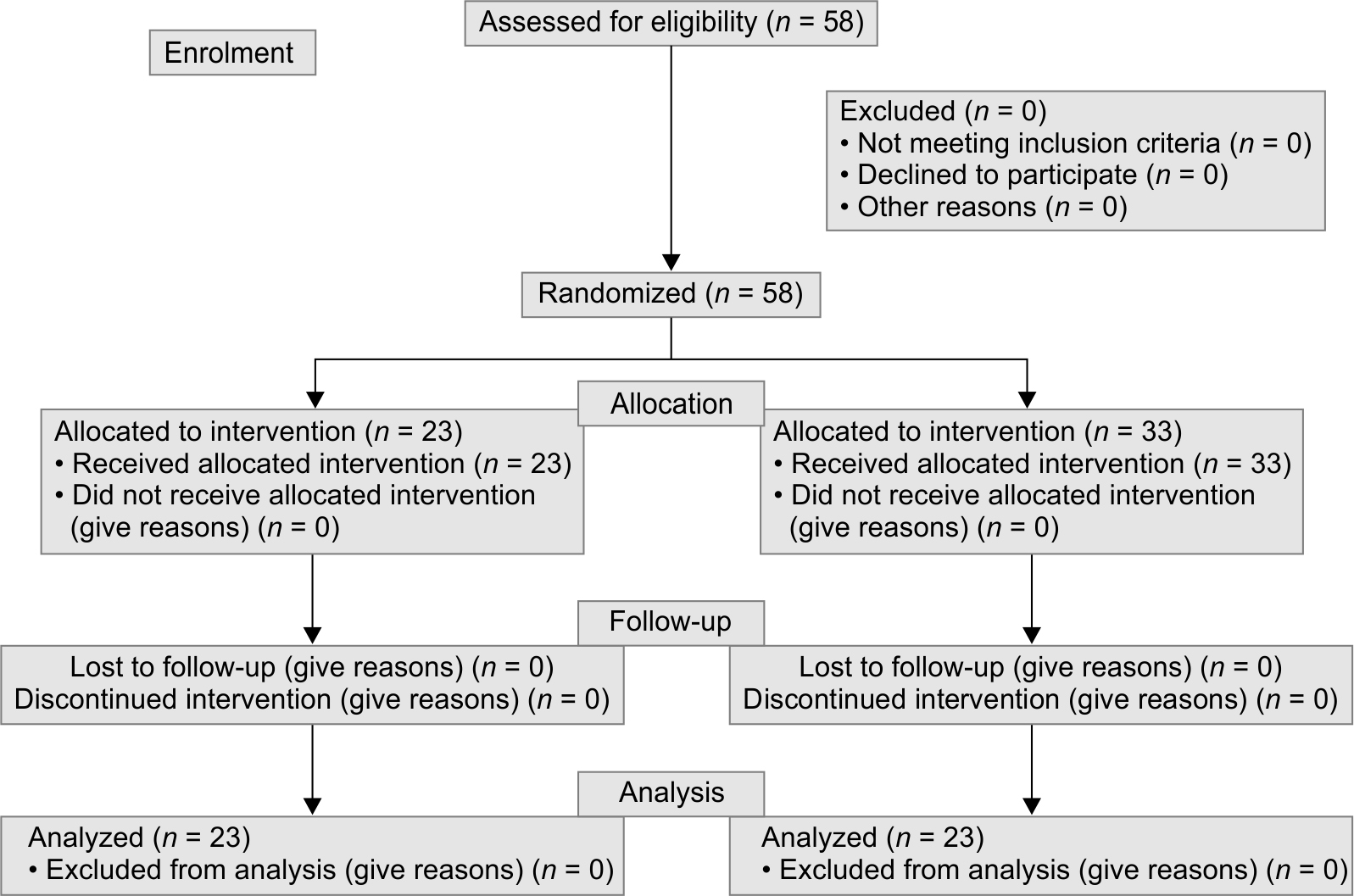 Table 1 presents the demographic and clinical details of the patients participating in the trial and control groups. The Chi-squared test and independent t-test showed no significant differences between the two groups in terms of the demographic and clinical details (p >0.05). The independent t-test results showed no significant differences between the two groups in the mean RSBI and RDOS before (p = 0.374 and p = 0.657, respectively) and 30 minutes (p = 0.103 and p = 0.218, respectively) after the adjustment of the pressure support, but the difference between the groups in the mean RSBI and RDOS was statistically significant (p = 0.025 and p = 0.044, respectively) 15 minutes after the adjustment(Table 2). Table 3 and 4 show the comparison of the mean of RDOS and RSBI between the groups at three times; based on the results of the repeated measure analysis of variance test, the interaction effect of group *time for RDOS has become significant nonlinearly (p = 0.037), but none of the interaction effects of the time*group for RSBI were significant (linear: p = 0.531; nonlinear: p = 0.272). The lowest and highest adjusted pressure supports in both groups were 12 and 24 cm H2O, respectively, and none of the patients in the study needed the maximum allowable pressure support (25 cm H2O)to relieve their respiratory distress symptoms.

This finding is also confirmed by the results of a study conducted by Johannigman et al. on the relationship of WOB with RR, RSBI, and other respiratory pattern variables. The cited study was conducted on 15 patients under treatment with pressure support ventilation admitted to the ICU. The results showed a strong relationship between RSBI and the WOB measured by an invasive method (r = 0.983), but RR alone was also related to WOB (r = 0.894), although the severity of this relationship was less than that of RSBI.17 In other words, according to the results of the study, RSBI is a parameter that is most related to WOB, and the index is thus probably a more accurate method for adjusting pressure support than using the RR.

Bennet 840, Hamilton C2, Hamilton C3, Hamilton Raphael, and Bellavista ventilators were available in the ICU of the research environment. Some of them have internal flow sensors and some others have external flowsensors; therefore, their accuracy in displaying patients’ data is different, but due to the limited number of ventilators, it was not possible to use one model of the ventilator (limitation of the study), but all flow sensors were calibrated before the intervention. The findings of this study can be used forfuture research to find the best method of adjusting pressure support to reducepatients’ respiratory distress more and faster.

The authors wish to express their appreciation to the Research Deputy of Isfahan University of Medical Sciences (project number: 3981037, IR.MUI.RESEARCH.REC.1399.040) and all patients and their families for their cooperation in the study.

Registration number: The study was approved by the School of Nursing and Midwifery of Isfahan University of Medical Sciences that was registered with Iranian Registry of Clinical Trials (IRCT20200429047242N1). It was also registered with the Research Ethics Committee (Code: IR.MUI.RESEARCH.REC.1399.040).