Background: Peripheral blood neutrophil-to-lymphocyte ratio (NLR) has recently emerged as a prognostic biomarker in many disease states. The aim of this study was to evaluate the diagnostic utility of NLR to predict poor functional outcomes in patients with hemorrhagic stroke and to compare it with the intracranial hemorrhage (ICH) score.

Materials and methods: Patients who presented to the emergency department with clinical features suggestive of stroke were evaluated with computed tomography (CT) brain to identify ICH. The ICH scores and NLR were estimated at the time of admission. Modified Rankin Scale (mRS) score equal to or greater than 3 at 90 days was used to define poor functional outcomes (major disability or death). Receiver operating characteristic (ROC) curve was plotted with NLR and the ICH score to analyze and compare their discriminative ability to predict poor functional outcomes.

Results: A total of 158 patients were recruited for the study. One hundred and seven patients were found to have poor functional outcomes as per their mRS score at 90 days. The mean NLR and the ICH scores at presentation were significantly higher for the poor outcome group (6.57 and 2.83) compared to the good outcome group (2.75 and 1.49). The ROC analysis revealed that both NLR and the ICH scores were good predictors of functional outcomes at 90 days with area under the curve (AUC) of 0.814 and 0.819, respectively. The sensitivity and specificity of NLR were 84 and 66.3% and those of the ICH score were 66.7 and 78.3% to predict poor functional outcomes.

Conclusion: In patients with hemorrhagic stroke, NLR at admission is a good predictor of functional outcomes at 90 days. When compared to the ICH score, NLR is more sensitive but less specific in predicting poor functional outcomes.

Hemorrhagic strokes are caused by rupture of a blood vessel resulting in bleeding into the cerebral parenchyma with or without extension into the ventricles. They account for 10–20% of all strokes.1 Intracranial hemorrhage (ICH) has high mortality and morbidity in spite of recent advances in medical intensive care and neurosurgical interventions. The 1-year mortality rate of ICH is as high as 54% and only 12–39% of patients are found to regain long-term functional independence.2

The neutrophil-to-lymphocyte ratio (NLR) in the peripheral blood has recently emerged as a biomarker of inflammation. It has been studied in multiple disease states including solid tumors, sepsis, connective tissue diseases, and stroke.3–6 Majority of the research with NLR has been conducted in ischemic stroke. There are very few studies pertaining to NLR in hemorrhagic stroke and to the best of our knowledge, none so far in the Indian population. Previous studies by Lattanzi et al. and Geide-Jeppe et al. have shown that high NLR on admission is associated with poor functional outcomes and increased mortality in patients with spontaneous ICH.7,8 However, the study by Sun et al. has failed to demonstrate any association between NLR and functional outcomes or mortality in ICH.9 Thus, the overall strength of evidence of NLR as an adverse prognostic factor in hemorrhagic stroke is inadequate and inconsistent. Additionally, there is limited evidence comparing NLR as a prognostic biomarker with existing clinico-radiological prognostic models in hemorrhagic stroke like the ICH score.10 In this context, this study was aimed to explore the role of NLR as a prognostic biomarker in patients with hemorrhagic stroke and to compare it with the ICH score to predict functional outcomes.

The study was conducted as a prospective observational study at the Department of Emergency Medicine, Pushpagiri Institute of Medical Sciences, Thiruvalla, Kerala, India. Patients were recruited for the study from February 2019 onward for a period of 8 months after obtaining clearance from the Institutional Ethics Committee (PIMSRC/E1/388A/12/2019). The sample size was calculated from the data obtained from a previous study conducted by Lattanzi et al.,7 using confidence interval of 95%, sensitivity of 62.2%, specificity of 84.9%, and prevalence of mRS ≥3 of 53.1%. Sample size thus obtained was 132 cases, and adding a dropout allowance of 20%, the final sample size was taken as 158 cases. Patients above 18 years who presented to the emergency department within 24 hours of onset of stroke symptoms and evidence of hemorrhagic stroke in CT brain were included in the study. Patients with a history of trauma, fever, prior stroke, or current anticoagulant medications were excluded. Data regarding baseline demographics and the ICH score (Table 1) at presentation were collected and documented. The values of absolute neutrophil count (ANC) and absolute lymphocyte count (ALC) were obtained from the complete blood count results (Sysmex XN-1000 Hematology Analyzer) at admission, and NLR was calculated for each patient at presentation. The study endpoint was functional outcomes at 90 days. It was assessed by telephonic conversation using Modified Rankin Scale (mRS)—(Table 2).11–13 Patients with mRS greater than or equal to 3 (major disability or death) were categorized as having poor functional outcomes.

Categorical and quantitative variables were expressed as frequency (percentage) and mean ± standard deviation (SD), respectively. Descriptive statistics such as mean ± SD, median with interquartile range (IQR), minimum, and maximum were used to describe quantitative parameters. Receiver operating characteristic (ROC) graphs were plotted, and the area under the curve (AUC) was calculated to assess diagnostic accuracy of NLR and the ICH score in detecting poor outcomes and to assess the optimal cutoff scores. Sensitivity, specificity, positive predictive value (PPV), negative predictive value (NPV), and accuracy had been calculated. For all statistical interpretations, p <0.05 was considered as the threshold for statistical significance. Statistical analysis was performed using the statistical software package SPSS, version 20.0.

A total of 158 patients were included in this study, 102 males and 56 females. The mean age of the study group was 66.5 years (SD = 12.6). The baseline demographic characteristics and the ICH score on admission are shown in Table 3.

NLR as a Predictor of Functional Outcomes at 90 days

The ROC analysis with respect to NLR and mRS at 90 days is shown in Figure 1. NLR was found to be a good predictor of functional outcomes with AUC of 0.814 (p-value less than 0.05). The best predictive cutoff value for NLR was 3.4 at which it had a sensitivity of 84% and a specificity of 66.3% to predict poor functional outcomes at 90 days (Table 7). 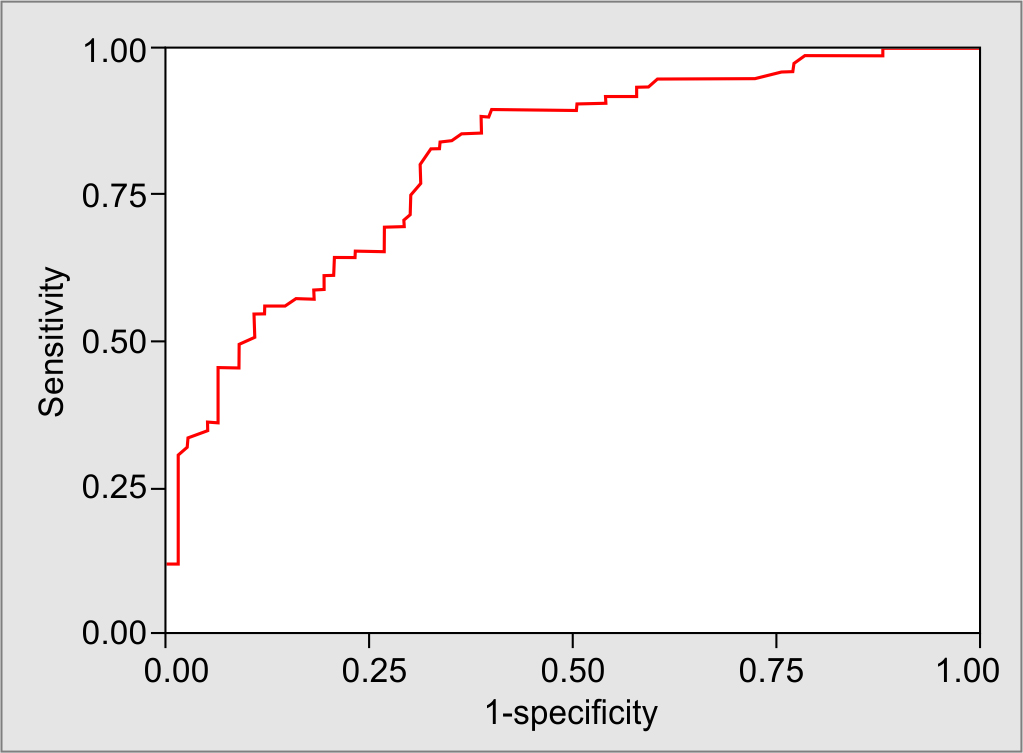 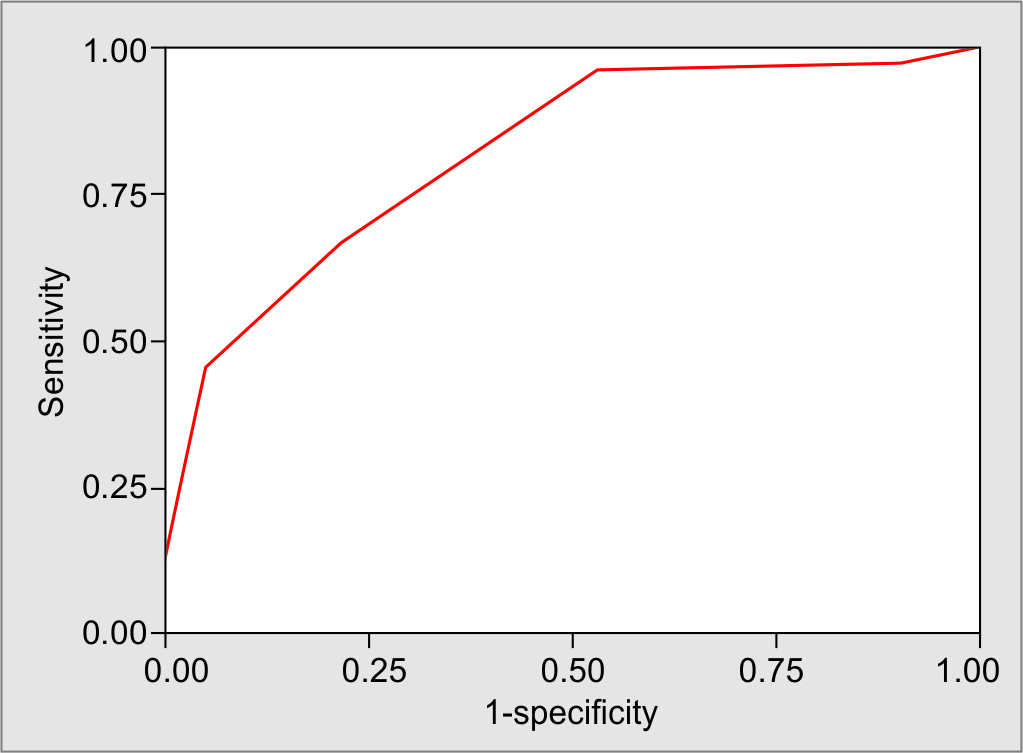 Comparison between NLR and the ICH Scores

This study explores the clinical significance of NLR in patients with hemorrhagic stroke with respect to functional outcomes. NLR is a simple parameter that can be calculated easily at the bedside from the results of routine blood investigations readily available to the clinicians. This index incorporates the changes in ANC as well as ALC, making it a potential cell-based biomarker to assess the inflammatory response occurring in the body. Previous studies have shown that NLR shows good correlation with other traditional biomarkers of inflammation such as C-reactive protein and IL-6 (interleukin-6) or with oxidative stress markers.14–16

We have observed in this study that derangements in NLR occur early in the course of hemorrhagic stroke and this supports the hypothesis that inflammation plays an important role in the pathophysiology of ICH-associated brain injury. In our study, it is found that high ANC, low ALC, and high NLR on admission are associated with major disability at 90 days. These findings are consistent with the results of studies by Lattanzi et al. and by Geide-Jeppe et al.7,8 Hence, it can be inferred that the initial inflammatory response, especially when intense, has a detrimental effect on the course and outcome of the disease.

Apart from NLR, it is also observed in this study that statistically significant difference exists between good and poor outcome group with respect to age and ICH score also. The mean age of the group with poor outcomes is found to be higher when compared to the mean age of the good outcome group (68 vs 63 years). This finding is in congruence with the findings of Tekinarslan et al. where age more than 65 years was found to be an important poor prognostic factor in patients with hemorrhagic stroke.17

The diagnostic ability of NLR in predicting poor functional outcomes at 90 days is good and is comparable with clinical prognostic models like the ICH score. In this study, the ROC analysis has demonstrated that both NLR and the ICH score have nearly equal to AUC. At their cutoff values, NLR was found to be more sensitive but less specific than ICH score but their overall accuracy was nearly the same. This difference in sensitivity and specificity can be explained by the fact that the ICH score is a composite score that integrates multiple clinical and radiological data, which strongly influences the disease outcomes while NLR reflects only the intensity of the inflammatory response occurring in response to ICH. Both NLR and the ICH score have a good discriminating ability to predict poor functional outcomes in hemorrhagic stroke patients but should be used in the correct clinical context in accordance with their differences in sensitivity and specificity. We are of the opinion that, in view of its better sensitivity, NLR can prove to be valuable as a screening tool in the early risk stratification of patients with hemorrhagic stroke.

To the best of our knowledge, we believe that this may be one of the few studies that have directly compared the diagnostic performance of NLR as a sole prognostic biomarker to the more complex clinico-radiological prognostic models like the ICH score. The main limitations are that this is a single-center study with a small sample size and that the potential confounding factors such as blood pressure and body temperature control, intensive care unit (ICU) care, osmotherapy, surgical interventions, and secondary infections that might affect the clinical outcomes are not taken into consideration. Also, the patients have been followed up to 90 days only; hence, no comment can be made on their long-term outcomes.

The authors would like to thank Dr Rajeev Aravindakshan, Additional Professor, Department of Community and Family Medicine, All India Institute of Medical Sciences, Mangalagiri, for his valuable contributions in the preparation of the manuscript.