Background: Advanced age is one of the key risk factors for mortality and morbidity in intensive care units. The full outline of unresponsiveness (FOUR) score has been developed and introduced to address the limitations of the Glasgow Coma Scale (GCS). The current study aimed to evaluate the ability of the FOUR score in predicting the outcomes (survivors, nonsurvivors).

Materials and methods: This observational study of 168 consecutive elderly patients admitted to medical intensive care during the 14 months carried out prospectively. FOUR score in the 24, 48, and 72 hours of admission, and demographic characteristics of all elderly patients were calculated, then recorded. The receiver operating characteristic (ROC) curve, logistic regression, and Hosmer-Lemeshow test were used (95% confidence interval) for statistical analysis.

Conclusions: The FOUR score is a suitable scoring system for prognostication of outcomes in critically ill elderly patients. The FOUR score 24 hours of admission was superior in terms of discrimination power than 48 and 72 hours, but better calibration power belonged to FOUR score 48 hours.

A large number of predictive models have been developed and are widely used in intensive care practice over the past 35 years. They have valuable advantages such as continuous improvement of care and management in the intensive care units.1 In addition to their strengths, scoring systems have weaknesses, and we know there is no perfect model that can be used in all different settings.2,3 Customizing the model coefficients to the specific population could be beneficial for obtaining more accurate probabilities or the development of new scoring systems specialized to the target population.4 Developed in 1974, the Glasgow Coma Scale (GCS) used to objectively describe the neurological status. Although it is considered as the gold standard in determining the level of consciousness, but in the literature, limitations for this score have been mentioned several times.5–8 From the past decade, the full outline of unresponsiveness (FOUR) score was validated and introduced to calculate four functional dimensions including eye, brainstem reflexes, motor responses, and respiration.9 By using this new structured objective scoring model, the brainstem function can be examined, even for patients who cannot communicate verbally.10,11 Decreasing FOUR score (with ranging from 0 to 16) is associated with a falling level of consciousness.12,13

The validity of the FOUR score with reference to GCS has been shown in many studies.5,6,11,14 However, there is no consensus on which of these scoring systems is best.15–17 External validation should be obtained when applying the scoring system to a new setting.2

Khanal et al.20 in a study of 97 patients (age >16 years), prospectively compared the outcome prediction of these two models. Measuring both scores within 24 hours of ICU admission, data analyzing showed that the mean scores of nonsurvivors were lower than survivors (p <0.001). The AUCs of 0.79 and 0.82 (for GCS and FOUR score, respectively) indicated to fair discrimination power for both. Considering the Youden index, 6.5 was the best cutoff point for both scores. The Hosmer–Lemeshow Chi-square coefficient test showed the FOUR score had better calibration power than GCS. The Spearman test of 0.91 pointed to a strong correlation between two scores (p <0.001). Some studies suggest that these two predictive models have the same ability in prognostication of the outcome; however, some studies have pointed to the superiority of either model. Accordingly, it is recommended that these models should be repeatedly calibrated.2 As far as we know, there have been no studies assessing the use of the FOUR score in predicting outcomes in MICU for the elderly patients. The present study aimed to evaluate the FOUR score ability to predict outcomes in elderly patients admitted to the MICU.

In this cohort study (July 2016–October 2017), 168 consecutive elderly patients (age ≤65 years) admitted to the MICU were included to study. Patients with brain death and who stayed in the ICU for less than 24 hours were excluded.

Patients’ demographic data (including gender and age) were collected from the records of patients, and serial FOUR scores for the first 24, 48, and 72 hours of admission were calculated for each patient separately.

Eye and motor responses, respiration patterns and brainstem reflexes are the categories of the FOUR score. The ranges of score for each category is 0–4 points. The lower scores of the FOUR score denoting an increasing deviation from normal. Worst FOUR scores in 24 hours at the first 24, 48, and 72 hours after MICU admission were derived. After the initial recording of data in collection form, the data entered to the SPSS (IBM Corp., Version 22.0, New York). Then, using statistical tests, the relationship between patients’ outcomes and the FOUR score was assessed. To protect patients’ privacy, no information has been provided that could lead to patient identification. The primary outcomes for this nonintervention study were nonsurvivors and survivors.

Patients who died after 24 hours of admission to the MICU or were diagnosed with brain death were included in nonsurvivors. To summarize the data related to the study population, simple descriptive statistics were used for continuous variables and percentage for classified variables. The p <0.050 is considered significant. For assessing the discrimination power of the model, calculating the AUC-ROC curve, distinguishing between survivors and nonsurvivors, was evaluated. AUC of 0.5 means random chance; AUC more than 0.7 and 0.8 indicates a moderate and good prognostic models, respectively.21 The agreement between actual outcomes and individual probabilities shown with calibration power that assessed by Hasmer–Lemshaw goodness of fit (GOF) test; if P is greater than 0.05, it indicates that the model has a good calibration.22

A total of 168 elderly patients admitted to MICU, with a mean age of 74.97 ± 6.28 years (65–90 years), 70 (41.7%) men, and 98 (58.3%) women were enrolled in this study. In total, 31% (52 patients) died. Chronic obstructive pulmonary disease (COPD), gastrointestinal (GI) bleeding, cerebrovascular accident (CVA), sepsis, post-cardiopulmonary resuscitation (CPR), and cancer were the most diagnosed diseases, respectively. Table 1 shows the characteristics of the study population. 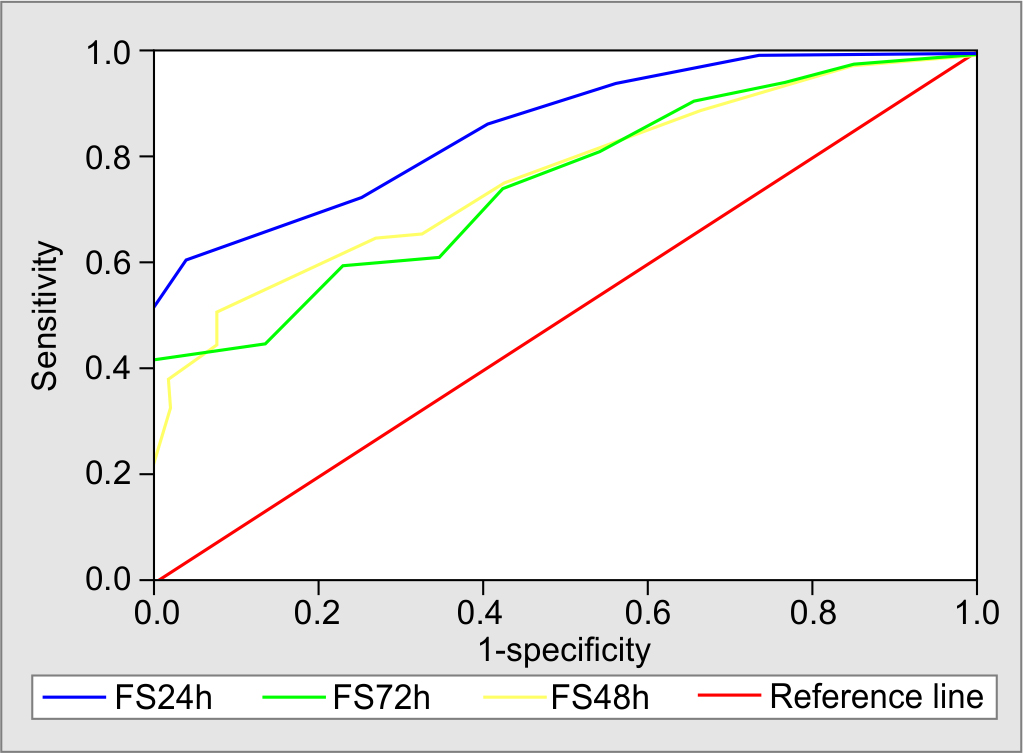 In line with our results, many studies have reported that patients with low FOUR scores had a poorer prognosis or higher mortality rates.5,11,18,24,25 Many studies have also pointed to the appropriate prognostication power of FOUR score (Table 3).

Fugate et al.24 in a prospective, a cohort study from June 2006 to October 2009 assessed the predictive ability of the FOUR score in patients’ postcardiac arrest and compared its performance to GCS. Hospital mortality was the primary outcome. The total mortality rate was 65% (89). None of the patients with a FOUR score ≤4 survived at days 3–5 after cardiac arrest, and only one patient with a GCS of 3 survived. On the 3rd–5th days after cardiac arrest, 91% patients with FOUR score >8 (p <0.0001) and 87% patients with GCS >6 survived (p <0.0001). In serial exams, two-point improvement in FOUR score was associated with survival. This relationship did not apply to GCS score. They observed the FOUR score has good accuracy, and a simple clinical tool can predict outcomes reliably.

Mcnett et al.27 evaluated the correlations between GCS and FOUR scores of 24 and 72 hours with cognitive/functional outcomes. Also, they assessed the correlation between both scores and mortality; 136 patients with a mean age of 53.1 enrolled in their study. In their study, the FOUR score was similar to GCS in terms of discrimination power.

Sadaka et al.28 in a prospective study examined the predictive value of FOUR score in TBI and compared its performance to GCS; 51 patients were enrolled in their study. In-hospital mortality and poor neurologic outcome in the 3rd to 6th months were the primary outcomes. The FOUR score showed an AUC of 0.67 for poor neurologic outcomes, it was 0.65 for GCS. Similarly, for in-hospital mortality it was 0.64 for FOUR score and 0.63 for GCS. They confirmed the appropriate accuracy of the FOUR score in predicting the outcome of TBI patients, also they emphasized further studies for standard use of this model.

In another prospective cohort study, Okasha et al.16 compared the ability of these two models in predicting TBI outcomes; 60 patients with TBI were included in their study. Both scores were calculated on arrival to the emergency room. Unfavorable outcome, in-hospital mortality, endotracheal intubation, and LOS were primary outcomes. The overall mortality rate was 25% (15) and 58% (35) had an unfavorable outcome. The AUC for FOUR score was significantly higher than AUC for the GCS (0.850 vs 0.796, p = 0.025). The models were similar in predicting unfavorable outcome (p = 0.136) and endotracheal intubation (p = 0.06). The ability of the FOUR score was greater in distinguishing survivors and non-survivors.

In our study, the calibration power of FOUR score was acceptable in 24 and 48 hours, but it was weak for FOUR score 72 hours of admission (p = 0.26, p = 0/45, and p <0.001, respectively). The calibration power of FOUR score was varied in several studies, depending on the diagnosis of the patients and the setting in which the study was performed.29,30 This inconsistency and dissimilarity in calibration can be explained in this way that Predictive models of outcome should be calibrated before being used in new settings to avoid compromising their accuracy.2 Recalibrating outcome prediction models take into account the adjustments needed to cope with population changes, and the quality of care in different settings thus can improve the estimation of the outcome.

The overall mortality rate observed in our study was 31%, which was 65% in Fugate et al.24 study and 14.6% in Nyam et al.18 study. Differences in inclusion criteria, patients’ diagnosis, severity of their illness, and quality of care between studies can be the reasons for the existing differences in mortality rates. The sample size, quality of care, and institutional policies can influence model calibration. Therefore, it is necessary to adapt the model to these conditions. Ethical considerations have been considered in conducting this study.