Unilateral Pulmonary Contusion after Cardiopulmonary Resuscitation Complicated by Delayed Obstructive Atelectasis: A Case Report and Review of the Literature

We present a previously healthy 57-year-old man who had a sudden cardiac arrest intraoperatively and developed unilateral pulmonary contusion shortly after cardiopulmonary resuscitation. He was gradually improved by supportive management. But, several days later he had worsening of respiratory symptoms and obstructive atelectasis was proven by bronchoscope finding of thick mucus plugging left main bronchus. These are rarely recognized but important post-resuscitation complications. Early detection is crucial to improve outcome.

Pulmonary contusion is a direct or indirect lung parenchyma damage caused by chest trauma,1 which can be a complication of chest compression during cardiopulmonary resuscitation (CPR).2 Alveolar-capillary membrane is torn by kinetic energy transferring to the lung tissue in injured patients. Consolidation and alveolar collapse occur as a result of blood and proteinaceous fluid flooding alveoli and loss of surfactant. In addition, increased airway mucous production in response to inflammation creates mucous plugging, air resorption, and collapse of injured lung segments.3

A 57-year-old man, a glazier, presented to our emergency department after left forearm laceration injury. He had no known underlying disease and was transferred directly to the operating room (OR) for vascular and tendon repair. After repairing his first tendon, he developed pulseless ventricular tachycardia (VT). CPR was started immediately by mechanical chest compression (MeCC) devices. Venoarterial extracorporeal membrane oxygenation (VA-ECMO) was commenced after 39 minutes of CPR and return of spontaneous circulation (ROSC) was achieved. Coronary angiography was immediately performed, which revealed 70% stenosis of left circumflex artery. Percutaneous coronary intervention with drug eluting stent was done successfully. He was still on VA-ECMO and transferred to cardiac care unit (CCU). He was sedated by fentanyl and midazolam and ventilated by pressure assist/control mode of ventilation.

Figs 1A and B: Chest X-ray showing: (A) Increased homogeneous opacity at entire left lung; (B) Improvement of left pulmonary contusion 3 days after supportive treatment

He gradually improved until the fourth day after ROSC, when sudden worsening of dyspnea, agitation, and desaturation occurred. Patient-ventilator asynchrony was inevitable and muscle relaxant was given. Pulmonary auscultation revealed diminished breath sound on left side. Chest radiographs showed complete atelectasis at upper left lung and partial collapse of lower left lung (Fig. 2). Bronchoscopy, performed on the next day, demonstrated total obstruction of the left main bronchus by thick hyper-viscosity mucous secretions (Fig. 3A). After therapeutic bronchoscopy, left side bronchi were all patent (Fig. 3B). His clinical condition improved significantly and ECMO was then decannulated one day after bronchoscopy. Chest radiograph showed full expansion of the left lung after copious mucous was removed. He weaned from ventilator and successfully extubated shortly thereafter. 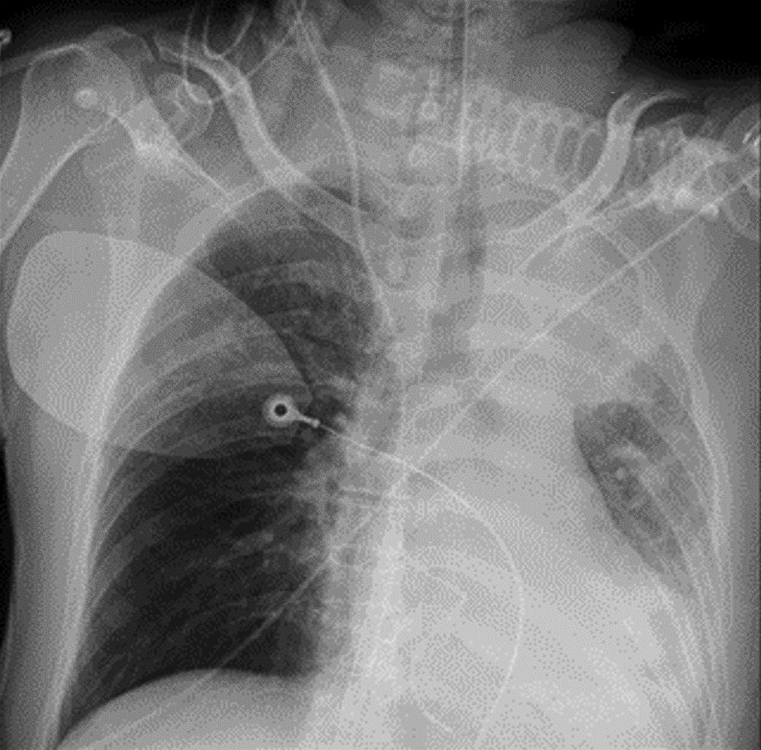 We obtained written informed consent from the patient. IRB approval was waived because this is a retrospective study.

Pulmonary contusion related to CPR is a significant problem in survivors, but there are few studies on this subject. Hellevuo et al.5 found that only one in 134 cases has lung contusion; however, the study does not explain the method of chest compression (traditional hand technique or using a MeCC device).

Pulmonary contusion results in bleeding and fluid leakage into the alveoli and the interstitial space of the lung, causing the lung to become rigid and lose its normal elasticity. Fluid accumulation in alveoli interferes with gas exchange causing ventilation-perfusion mismatching and concomitant loss of surfactant creating consolidation, alveolar collapse, and decrease in compliance. Surfactant activity deficit is most severe 24 hours after contusion.6 The different blood components that enter to the alveoli cause the release of multiple inflammatory mediators. This inflammatory response leads to rising mucous production, plugging part of the lung and resulting in its collapse,6 as seen in our patient. Also, the pain associated with chest wall injury can restrict ventilation and promote atelectasis.

Now, the MeCC device is more frequently used in many clinical settings, especially during the COVID-19 pandemic. There are few medical reports about pulmonary contusion after CPR, especially using the MeCC device. Atelectasis after pulmonary contusion by mucous plugging can increase ventilation-perfusion mismatching and lead to respiratory deterioration. The possibility of atelectasis should be considered when acute desaturation or change of PaO2 correlated with acute dyspnea. Regular daily follow-up chest radiograph is important for several days after CPR. Early detection and management may improve ventilation and reduce subsequent complication.

Pulmonary contusion after chest compression is a potential serious complication that is possibly under-reported. Its complication of atelectasis from thick mucus and from surfactant loss might lead to prolonged mechanical ventilation and poor outcome. Early detection of these post-CPR complications is crucial to improve post-cardiac arrest care outcome.