Bartter-like syndrome (BLS) is a constellation of biochemical abnormalities which include metabolic alkalosis, hypokalemia, hypocalcemia, hypomagnesemia with normal kidney function. BLS is a very rare syndrome and can be induced by certain diseases, antibiotics, diuretics, and antineoplastic drugs. Colistin is a polymicrobial bactericidal drug and currently re-emerged as the only salvation therapy against multidrug resistant bacilli especially in critically ill patients at intensive care units. Only an anecdotal case report of colistin-induced Bartter-like syndrome has been reported. We here report a case series of four critically ill patients who were on treatment with colistin and presented with serious metabolic disturbances.

Colistimethate is a bactericidal antimicrobial and now emerged as salvage therapy with increasing incidence multidrug-resistant infections. Systemic use of colistin has been reported to cause acute kidney injury but little has been documented for its association with renal tubular salt wasting nephropathy.1

We describe series of four cases of acquired Bartter-like syndrome following the systemic administration of colistimethate.

A 43-year-old female was presented, who had sustained common bile duct injury during her pervious surgery for cholelithiasis. Following a revision surgery, patient was shifted to ICU with T-tube in situ. Her blood pressure was 80/55 mm Hg, heart rate was 130/minute, and body temperature of 36.4°C. Patient was in septic shock and was started empirically on colistin, meropenam, and targocid after obtaining all bacterial cultures. On the 12th day of colistin administration, despite daily potassium replacements, hypokalemia was persistent. ECG revealed flat T waves. Other apparent causes of potassium loss like vomiting, diarrhea, Ryle’s tube, and T-tube loss were ruled out. Later, patient had also developed hypomagnesemia and hypocalcemia for which correction was started. We followed the standard hypokalemia algorithm to reach final diagnosis (Flowchart 1). A spot urinary potassium and urinary chloride were sent to differentiate between renal and extrarenal loss of potassium (Table 1). The patient had urinary potassium of 72 mEq/L confirming renal loss. Patient also had metabolic alkalosis and her urine chloride level was 111 mEq/L. Nephrology consultation was done and antibiotics were pinpointed to be the underlying cause for electrolyte disturbances and a diagnosis of BLS was made. Patient was started on tablet spironolactone 50 mg BD and patient showed eu-electrolytemia after 12th day of stopping colistin. 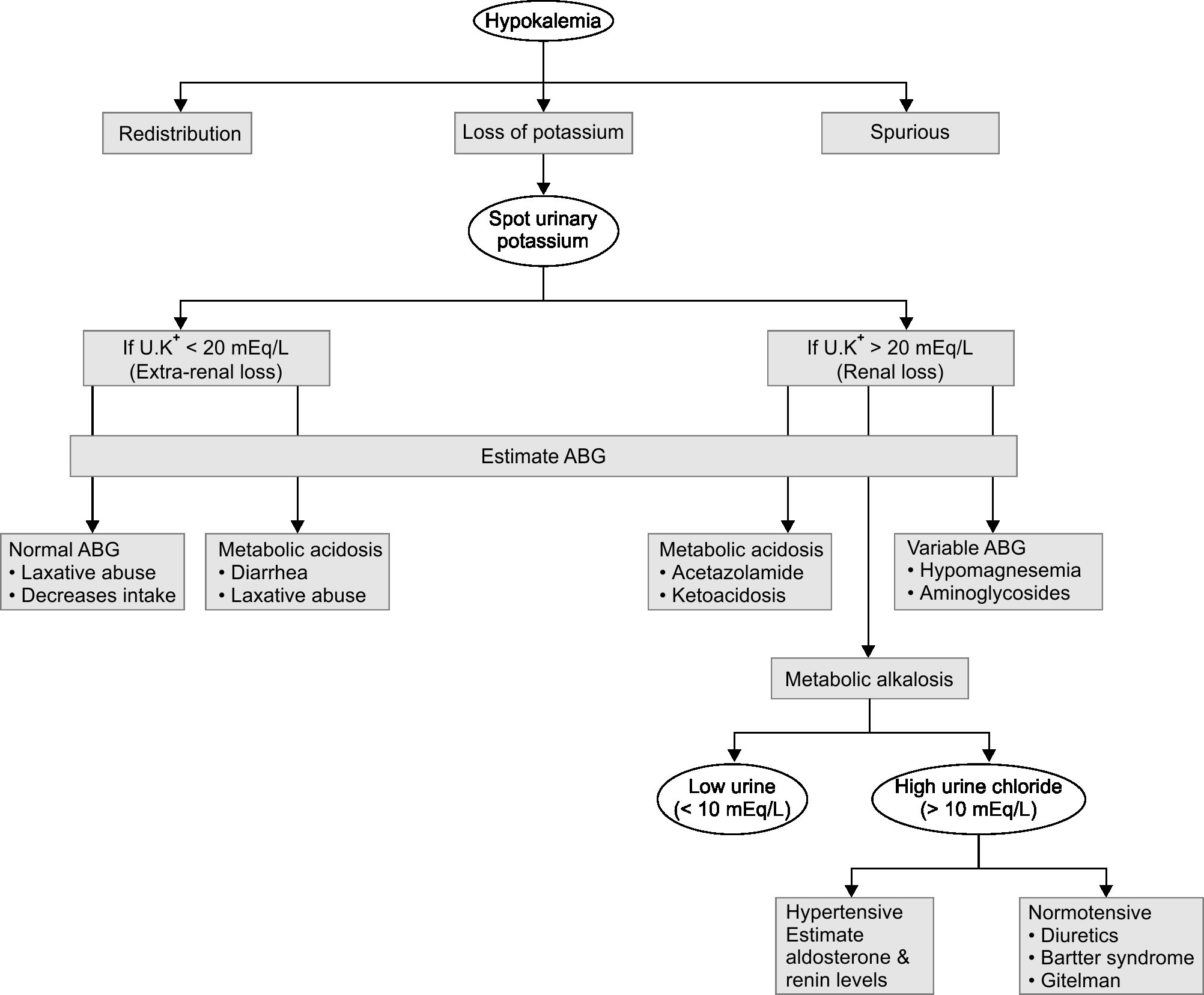 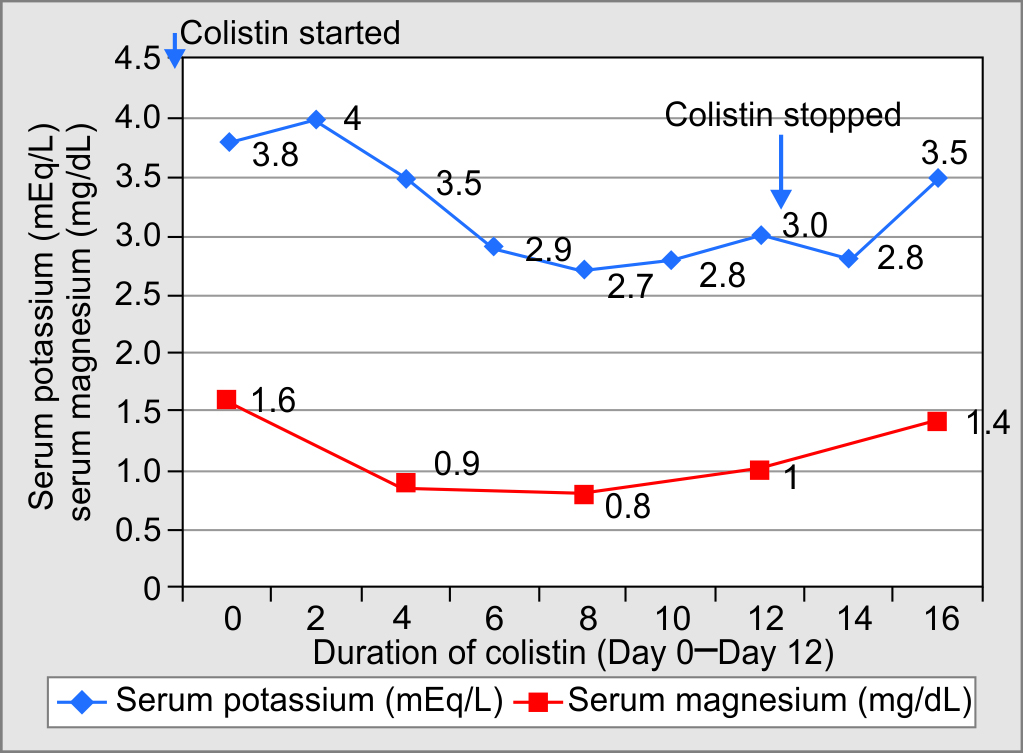 Fig. 1: Serum potassium (mEq/L) and magnesium (mg/dL) values of Case 2 on y-axis and shows duration of colistin therapy (in days) on x-axis 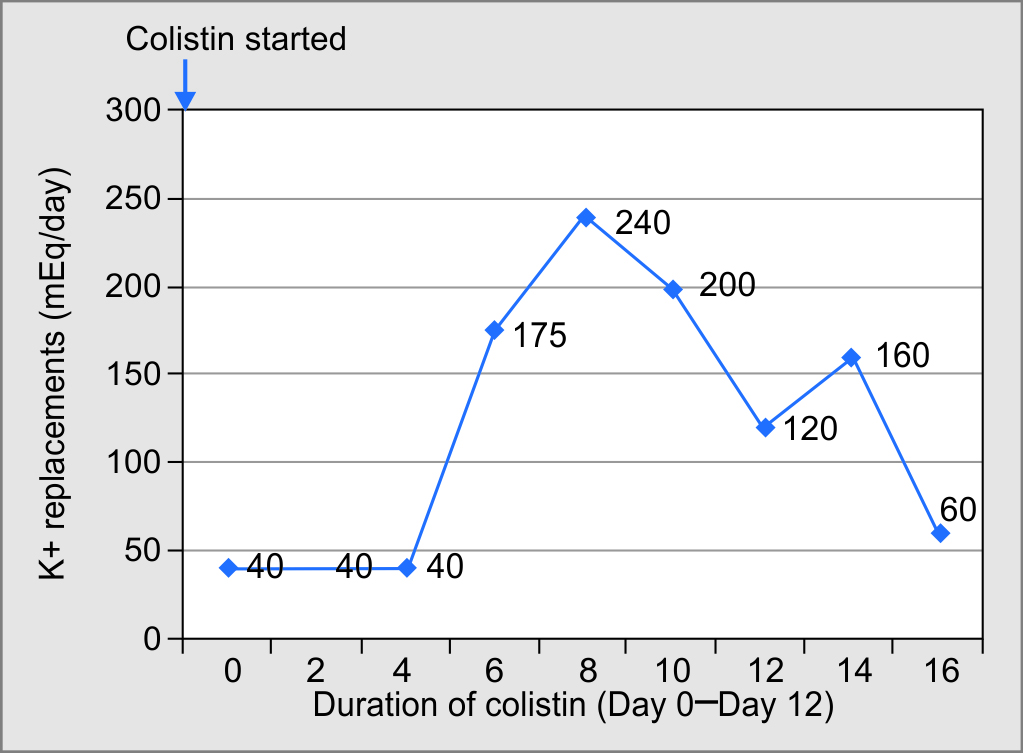 Fig. 2: Daily potassium replacement (mEq/day) on y-axis and duration of colistin therapy (in days) on x-axis

A 57-year-old gentleman transferred to ICU on high vasopressors, following emergency exploratory laparotomy for perforation peritonitis. Patient was empirically started on meropenam, teicoplanin, and metronidazole. His vasopressors could not be tapered off, so IV colistin was added on third postoperative day. Patient’s vasopressor support was gradually tapered off and stopped on Day 7. But now he developed refractory hypokalemia, polyuria, hypomagnesemia, and hypocalcemia along with metabolic alkalosis on seventh day of colistin administration. Electrolytes were restored after 5 days of stopping colistin (Fig. 3). 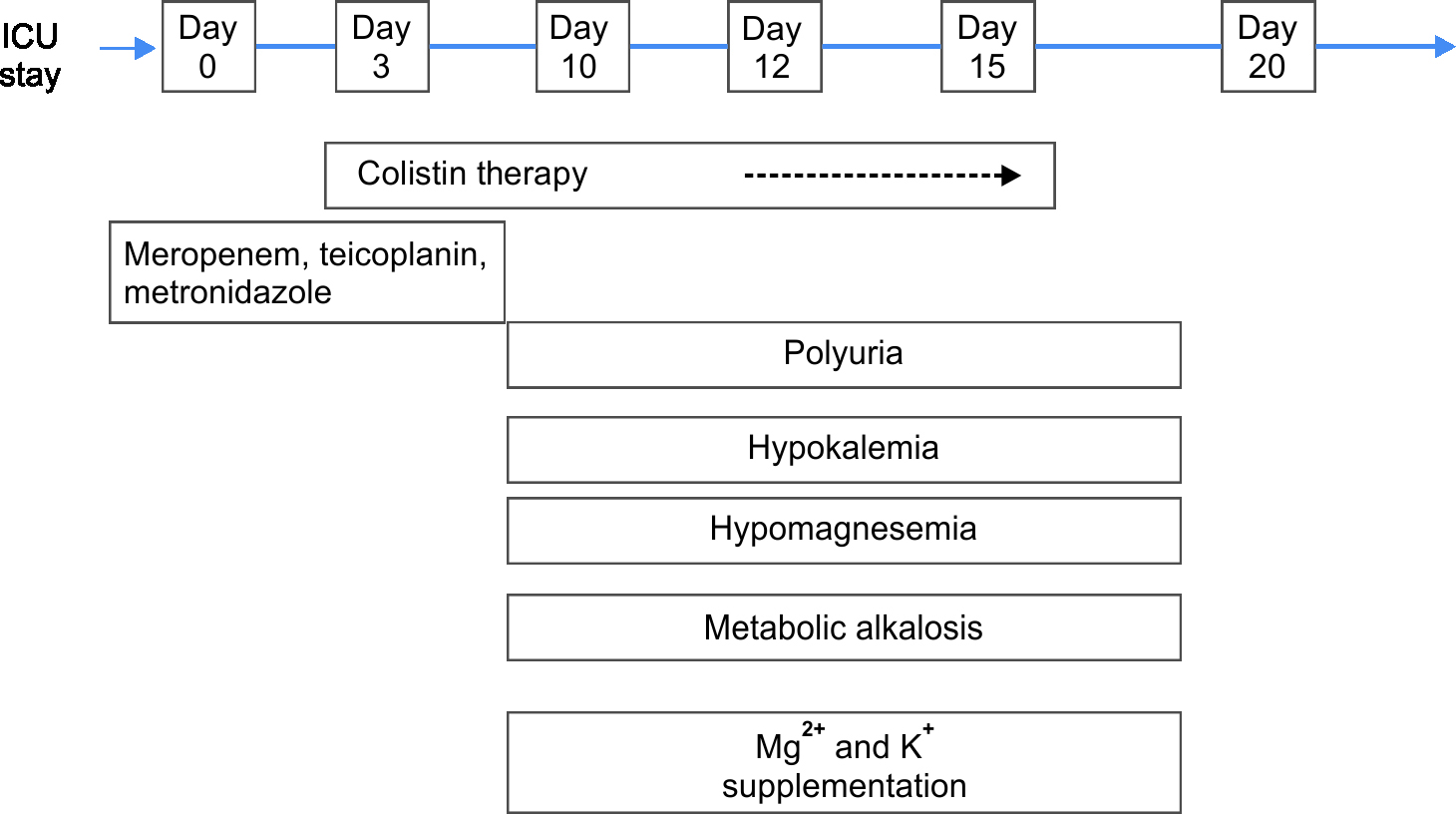 Fig. 3: Association of colistin with electrolyte disturbances and clinical symptomology

A 50-year-old gentleman, known case of diabetes mellitus type II and benign prostatic hypertrophy developed urosepsis with acute kidney injury, and he was admitted in the medical ward. Patient was transferred to ICU, when he developed aspiration pneumonitis with ARDS. His blood pressure was 80/60 mm Hg, heart rate was 142/minute, temperature 38.4°C, WBC count 22,000/mm3, serum creatinine of 2.3 mg/dL, and HCO3− of 18 mmol/L. After obtaining cultures, he was started on IV antibiotics (meropenam, colistin, and linezolid after respective renal dose adjustments). Patients recovered from ARDS and IV antibiotics were gradually de-escalated. After 20 days of ICU stay, patient again developed septic shock and now blood culture was suggestive of Acinetobacter baumannii sensitive to colistin. After 8 days of treatment with IV colistin, patient had developed hypokalemia, hypomagnesemia, hypocalcemia, and metabolic alkalosis. During this period patient developed two episodes of tachyarrhythmia. After 12th day of stopping IV Colistin and adding Spironolactone (50 mg OD), electrolyte imbalances gradually improved (Tables 2 and 3).

To understand the pathophysiology of Bartter syndrome, please refer to Figures 4 and 5. Apart from colistin being directly toxic to urothelium, similar to aminoglycosides, it may cause activation of the functional gain of CaSR (calcium sensing receptor) present on basolateral membrane of cells of thick ascending loop of Henle causing renal washing of sodium, potassium, calcium, and magnesium. This mechanism has been postulated to be the possible explanation of renal tubular defect8,13 (Figs 3 and 4, Table 3). 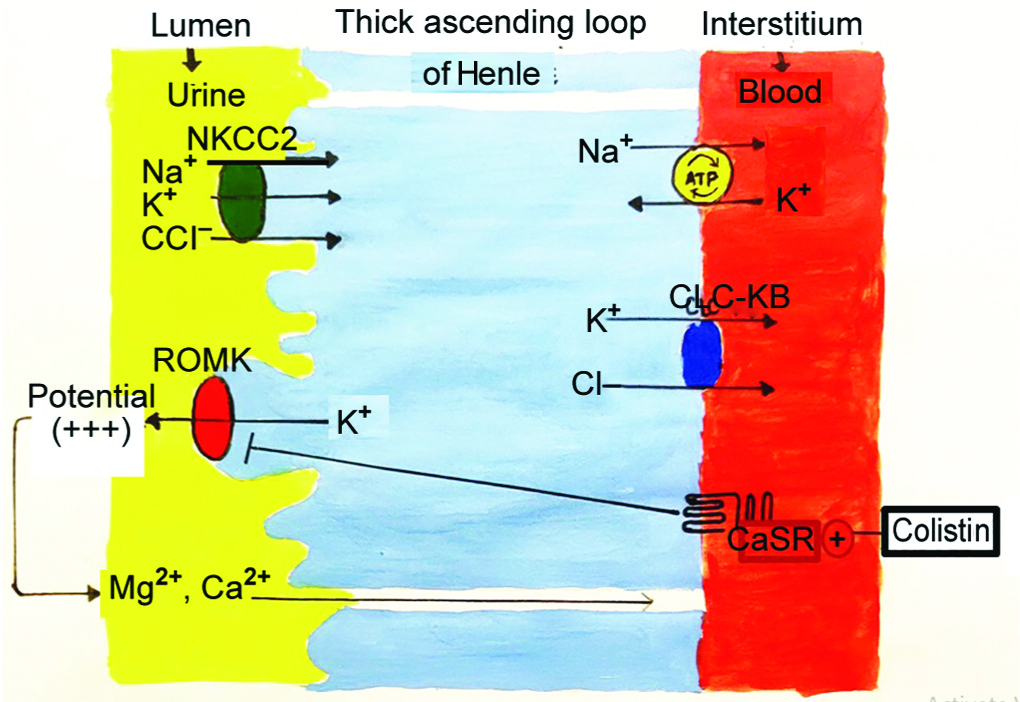 Fig. 4: Reabsorption of sodium chloride is achieved with the help of sodium potassium 2 chloride cotransporter (NKCC2). For this channel to function, concentration gradient is required across the cell which is maintained by sodium pump (sodium-potassium adenosine triphosphates), chloride channel (ClC-kb) on basolateral side, and potassium channel on luminal side (ROMK). This apical potassium channel also maintains a relatively positive voltage potential on luminal side leading to paracellular reabsorption of Ca2+ and Mg2+. Based on defect on any of these channels BS has been classified into five types (Table 3). Type V is because of gain of function mutation in CaSR which normally inhibits the apical potassium channel. Gain of function leads to further inhibition of this channel, concentration gradient is lost, and thus leading to defective reabsorption of all the electrolytes. Colistin causes a similar defect in this calcium-sensing receptor 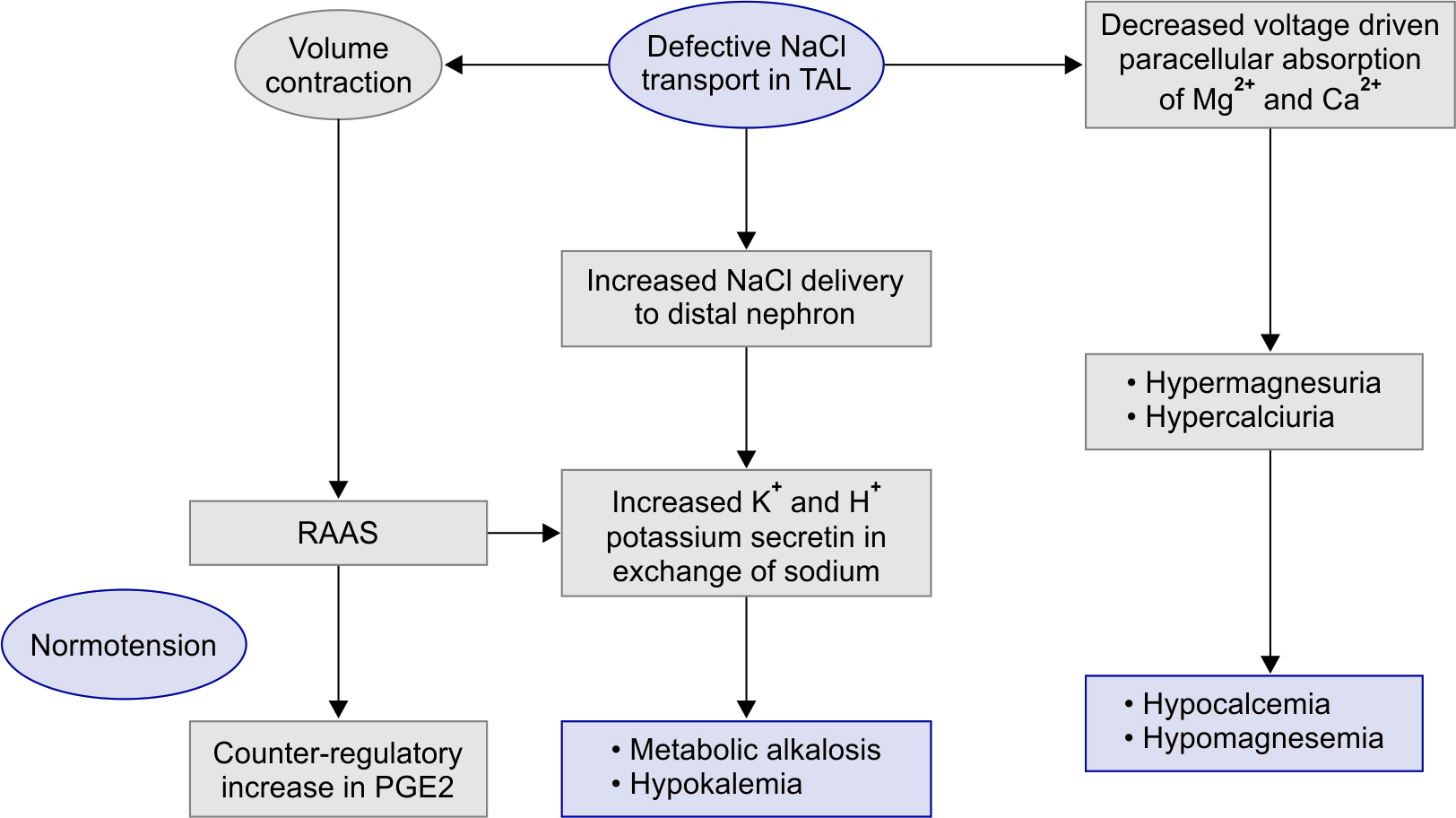 Fig. 5: The abnormal NaCl reabsorption in thick ascending loop of Henle results in increased delivery of NaCl to distal nephron. In an attempt to reabsorb sodium, potassium and hydrogen ions are lost leading to metabolic alkalosis and hypokalemia. Also excessive loss of salt and water causes activation of RAAS (Renin-angiotensin-aldosterone system) which help maintain normotension, causes counter-regulatory increase of vasodilatory PGE2, and aggravates metabolic alkalosis and hypokalemia. Defective paracellular reabsorption of calcium and magnesium leads to hypocalcemia and hypomagnesemia

The mainstay of managing Bartter-like syndrome includes correcting the volume deficit and electrolyte abnormalities, Renin Angiotensin Aldosterone system inhibitors like spironolactone and ACE-inhibitors, and nonsteroidal anti-inflammatory drugs (NSAIDs) against prostaglandin E2 like Indomethacin, celecoxib can be a useful adjuvants.14

As per hospital policy, the choice of colistin was due to the emergence of multiresistant gram-negative bacilli.

In our case series, all four patients exhibited laboratory abnormalities as manifested in Bartter-like syndrome while getting treated with IV colistin. All patients were normotensive and had normal kidney function except the fourth case (Table 1). None of our patient had any apparent cause of loss of electrolytes like vomiting, diarrhea, diuretic abuse, in any of the cases. All cases had metabolic alkalosis with hypokalemia, hypomagnesemia, hypocalcemia with normal kidney functions except the fourth case. There was renal loss of potassium, chloride, and calcium in the cases except the fourth case which had only minimal changes (Table 1). Apart from serum and urinary measurement, the determination of plasma renin and serum aldosterone level could be useful in further authenticating the diagnosis; however, we failed to do so because of nonavailability of these investigations. On an average, electrolyte abnormality manifested within 7–12 days of starting therapy with colistin.

Aggressive potassium, magnesium supplementation, and dis-continuation of colistin led to resolution of electrolytes within 4–12 days of stopping IV colistin while two patients required spironolactone to treat the BLS (Table 2).

Bartter-like syndrome is fairly a rare complication associated with colistin. A close monitoring of serum and urine electrolytes is thus prudent and should be kept in mind while treating patients with colistin. Early diagnosis and prompt treatment can avert the risk of fatal complications.