Factors Affecting Outcomes of Cardiopulmonary Resuscitation in a Nephro-Urology Unit: A Retrospective Analysis

Background: Availability of cardiopulmonary resuscitation (CPR) data from India is limited in published literature and data on patients with renal disease even more so. Documented survival-to-discharge rates worldwide range from 8 to 15% in renal disease as compared to 25% in the general population.

Methods: An institution-wide format for collection of cardiac arrest data was introduced in late 2015. We have analyzed all adult onsite cardiac arrests from January 2016 to December 2019. Patient characteristics and CPR parameters were both studied in detail. Primary endpoint was defined as survival to discharge. Association between patient and treatment characteristics and survival to discharge was studied.

Results: Successful CPR resulting in patient discharge occurred in 28 (31.4%) out of 89 patients. A very strong association was found between mortality and prolonged CPR (p <0.00001). Events occurring out of hours (p = 0.0029), patients admitted in the intensive care unit (ICU) (p = 0.03), initiated on inotropes (p = 0.003), and patients already on a ventilator (p = 0.0018) had poorer outcomes. Sepsis as the etiology emerged as the most significant association with mortality (p = 0.0007). Patient characteristics such as age, sex, presence or absence of chronic kidney disease, type of dialysis treatment, and vintage were found to be insignificant.

Conclusion: Analysis revealed survival to discharge of 31.4%. Sepsis in association with renal disease has been found to be consistent with higher risk for mortality. Other factors such as an out of hours event, admission to ICU, early intubation and inotrope initiation were associated with worse outcomes.

In patients with renal disease, sepsis as an etiology for cardiac arrest has emerged as an important cause of death with poorer prognosis than cardiac disease which may be partially reversible. Worse survival was noted in sicker patients, and dialysis vintage did not make a difference to survival.

Cardiopulmonary resuscitation (CPR) in the recent decades has seen a steady improvement in survival. International survival rates for CPR have shown a gradual increase over the decades: from 15%1 in 1992 to 24.8% in 2016.2

The updated ACC/AHA guidelines of 2015 make recommendations for 17 special conditions, but renal failure does not find a mention.3 The European Resuscitation Council states a few specific guidelines on management of patients who have a cardiac arrest during hemodialysis but is silent on the management of cardiac arrest due to other causes.4 Patients with chronic kidney disease (CKD) are a high-risk group where cardiac arrests occur due to cardiovascular comorbidities. We conducted an observational study of all cardiac arrest events in our nephrology unit to assess the overall rate of return of spontaneous circulation (ROSC) and subsequent survival to discharge and the various factors affecting them. Patient parameters, CPR parameters, and the general trend of survival to discharge over the years were also studied.

The data was collected in our tertiary nephrology care unit, from January 2016 to December 2019, on a standardized format (Fig. 1). This study received a full approval from the Institutional Ethics Committee. Retrospective analysis of all events was done. Those patients in whom CPR was not attempted and those events which had incomplete data were excluded. Event due to poisoning, suicide, or homicide, patients aged less than 18 years, pregnant women, or patients with mental disabilities were excluded from the study. 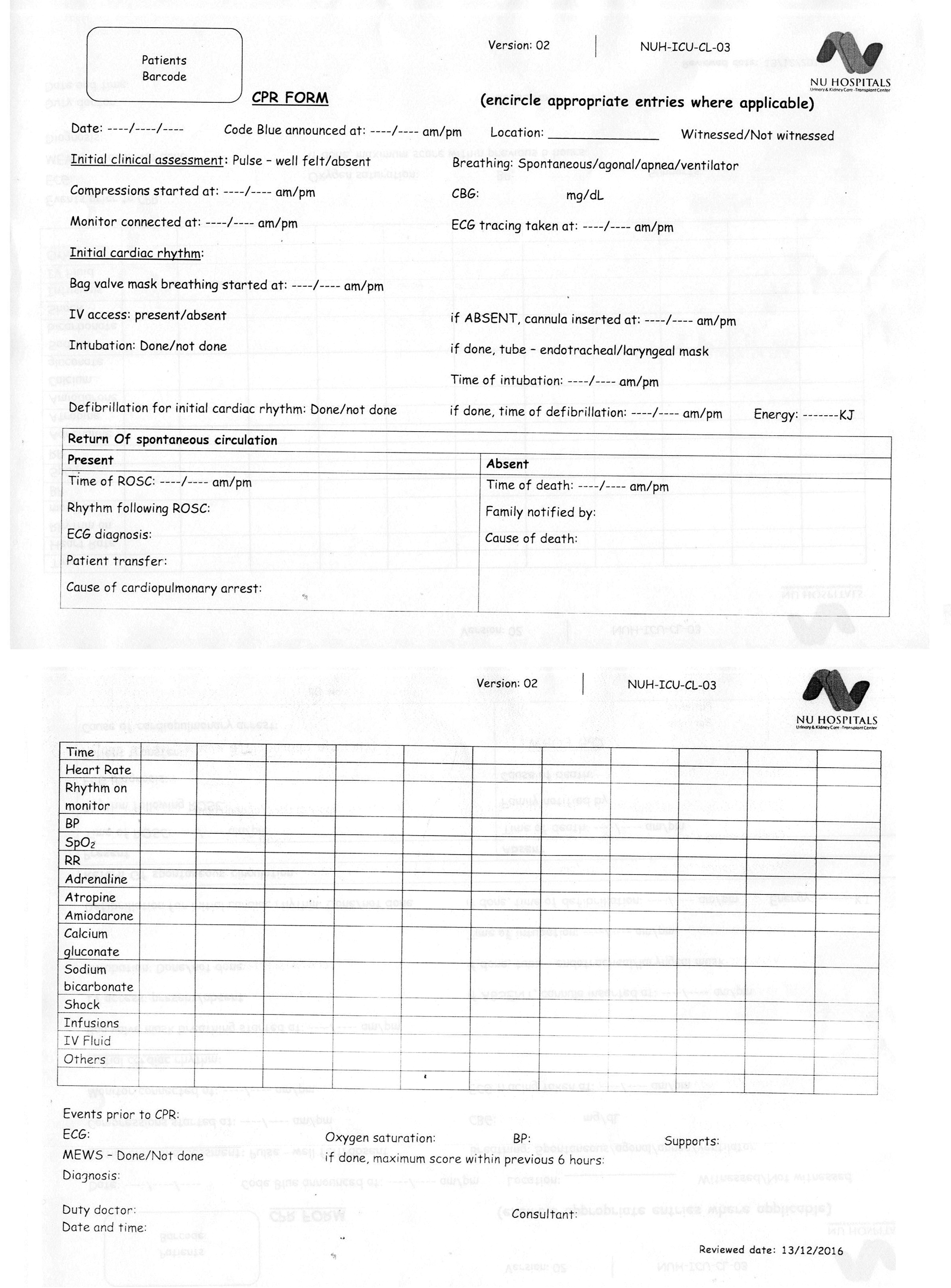 Patient characteristics studied were as follows: age, gender, diagnosis of diabetes mellitus (DM), systemic hypertension (HTN), CKD, type of dialysis treatment—hemodialysis (HD) or peritoneal dialysis (PD) and dialysis vintage, cerebrovascular event, peripheral vascular disease (PVD), ischemic heart disease (IHD), decompensated liver disease, and associated malignancies. CPR parameters studied were as follows: location of cardiac arrest, whether the cardiac arrest was witnessed, ECG rhythm on presentation, whether the rhythm was shockable or not, whether intubation was done at the time of the event or already on a ventilator, cause of the cardiac arrest, time at which a code was announced, total duration of CPR, whether ROSC was achieved or not, the details of the inotropic supports, and survival to discharge. Patients with a glomerular filtration rate less than 60 mL/min/1.73 m2 as assessed by MDRD formula for more than 3 months were considered to be CKD. Dialysis vintage was divided into three categories: <12 weeks, 12–26 weeks, and >26 weeks. Total duration of CPR performed was divided into three groups: less than 15 minutes, 15–30 minutes, and more than 30 minutes. Out of hours event was described as any event occurring after 6 pm and before 8 am on weekdays and any event occurring on a Sunday. Analysis of events according to days of the week and a trend of ROSC and survival to discharge over the years were studied.

Quality indicators of CPR such as compression rate, compression depth, hands off time, ventilation rate, leaning on the chest wall, end tidal carbon dioxide levels, diastolic blood pressure during the resuscitation could not be studied due to the retrospective nature of the study. Targeted temperature management in patients who achieved ROSC was not done because our institution is not equipped adequately.

Categorical data are presented as number (%) and continuous data as mean ± SD. Significance level was assessed at 5%. Chi-square was used to find the significance on categorical scale between two or more groups. Fisher exact test was used when the sample size was small. Pearson’s coefficient of correlation was used to determine association between number of comorbidities and survival.

ROSC was achieved in 43.82% of events, and 30.85% of events had survival to discharge. A total of 100 events occurred in 89 patients over 4 years. Seventy-eight patients had one event each, and 11 patients had two events each. Six events were excluded from analysis due to incomplete data or CPR not attempted. Analysis was done for 94 events in 89 patients, of which 39 events had ROSC and 29 events resulted in survival to discharge.

Patients who were already on a ventilator at the time of the event when compared to patients who were intubated during the event had a poorer chance at ROSC (p = 0.0022; OR = 5.35) and were less likely to survive to discharge (p = 0.001; OR = 9.0). Duration of CPR correlated negatively with survival to discharge (p <0.00001). Early defibrillation did not result in any improvement in survival to discharge or ROSC. Inotropic support was initiated for 20 events (out of 29) in the survivors’ group, as compared to 42 (out of 69) in the non-survivors’ group (p = 0.0035). Among all causes of cardiac arrest, cardiogenic and septicemic were the two most common causes. All cause analysis revealed that sepsis was the single most significant cause to adversely affect survival (p = 0.00236).

Patient characteristics such as age, sex, medical conditions such as DM, HTN, IHD, CVA, and PVD, diagnosis of CKD, patients on HD/PD, dialysis vintage, witnessed vs unwitnessed events, and defibrillation at the time of the event did not have any correlation with ROSC or survival to discharge. Events analyzed according to days of the week revealed no significant difference in incidence. The occurrence of events over the years has been fairly consistent with an average of 23 events per year (Fig. 2).

Figs 2A and B: Event distribution according to timeline

Out of 94 events, 3 had an out of hospital cardiac arrest (OHCA), and all the remaining events occurred in the hospital. There were 12 unwitnessed cardiac arrests (including three OHCAs); however, the presence of witness did not confer any survival advantage. Odds ratio for survival to discharge when analyzed according to location was ICU vs HD unit (OR = 8.75) > ICU vs ER (OR = 5.3) > ICU vs ward (OR = 3.33) > ICU vs OHCA (OR = 2.91). Although a total of 53,322 sessions of dialysis were conducted over a period of 4 years, only five events occurred in the hemodialysis unit.

We had 11 events in 10 patients with chronic liver disease (CLD) (10 chronic, 1 acute fulminant) with CKD on HD of which there were 3 events of ROSC and no survivors. Total number of comorbid conditions each patient had was categorized from 0 to 6 and correlated with survival to discharge. Pearson’s coefficient of correlation yielded r = 0.28 (p = 0.14).

Patients with renal dysfunction, who sustain cardiac arrest, have poor rates of survival to discharge; barely 8–15%.1,5–8 Some experts claim that CPR must be performed only for those patients who have a reasonable chance of survival, quoting that CPR is a time- and resource-consuming effort.7 The largest study from India done in the emergency room quotes a survival to hospital admission of 29.5% and survival to discharge of 9.9%.9 Earlier North American studies quote a survival to discharge of 6–8%.1,10 With 5-year mortality after diagnosis of CKD hovering at 70%,11 CPR was not even attempted in patients with underlying renal dysfunction.1 In our study, survival to discharge rate was 31.4%. We have a designated CPR committee that oversees training, conducts mock drills, performs analysis of real cardiac arrest events, and identifies opportunities for improving response to a said event. All medical and nonmedical staff are routinely trained in basic life support (BLS) and encouraged to give CPR. Such training programs conducted routinely have been proven to improve hospital ROSC and survival to discharge rates.12

Sepsis was associated with a significantly lower chance of survival to discharge in contrast to all other causes of cardiac arrest (OR = 6.3) (p = 0.0007). This is in sharp contrast to other studies who quote cancer and cardiac etiology to be the leading cause of death in patients with renal dysfunction.13,14 For each 5 mL/min/1.73 m2 decrease in estimated glomerular filtration rate (GFR), there is an associated higher risk of death due to cardiovascular disease even in CKD patients who are not on HD.15 Some studies quote that there was no difference in survival to discharge in patients on HD and patients who were not on HD.1

We also found that patients who were likely to survive to discharge were almost always resuscitated within 15 minutes of the onset of the event (p <0.00001). The average duration of CPR was 10.37 minutes in survivors vs 27.13 minutes in non-survivors. This is similar to outcomes worldwide, wherein patients who were resuscitated within 15 minutes had the highest chance of surviving to discharge.16 Patients who survive with a shorter CPR duration have a significantly better neurological outcome than those who survived with a longer CPR duration.17 Some authorities prescribe a longer duration of CPR.18 Early defibrillation at the time of the event did not produce any statistically significant difference in survival to discharge. Studies quote a survival rate as high as 41% for patients presenting with a shockable rhythm as their initial rhythm.6

Analysis of events according to day of the week revealed that there was no significant difference. We anticipated a higher number of events occurring on Monday/Tuesday as most patients have a longer interdialytic gap over the weekend, but this was not the case.13 Patients who presented with an event during regular working hours were more likely to be successfully resuscitated and survive to discharge (p = 0.004). Other authors also report lower successful resuscitation during out of hours CPRs.6,19 We had similar staffing round the clock and were unable to pinpoint the exact reason for this difference.

Our data do not reveal any differences in survival with respect to age or gender of the patients, presence or absence of CKD, HD or PD or dialysis vintage. Others have reported worse outcomes with increasing age6,7 and female gender.13 A total of 63 patients were on renal replacement therapy (59-HD, 4-PD). Studies reveal worsening survival with increasing dialysis vintage.5 We had 11 events in 10 patients with decompensated liver disease, none of whom survived. Several studies have identified CLD as a prognostic factor associated with worsened survival in patients who already have CKD.20–22 Some authors go as far as to question the utility of renal replacement therapy in patients with liver disease.22

As this was a single-center, time-bound study; the results could have been skewed due to inadequate numbers and institutional bias. Since most of our patients had renal disease, acidosis correction and potassium levels during the cardiac event are important parameters that need to be studied. Quality indicators of CPR were not studied. We could not follow-up the patients beyond survival to discharge. Quality of life postresuscitation including neurological outcome also merits analysis.

Sepsis as an etiology for a cardiac arrest event emerged as the single most important factor influencing mortality of CKD patients, along with longer CPR times.