The pyogenic liver abscess is usually polymicrobial and is seen as a complication of biliary disease or peritonitis. Over the past three decades, monomicrobial liver abscess caused by Klebsiella pneumoniae is being increasingly reported from South East Asian countries like Taiwan and Korea. It is a community-acquired infection caused by a distinct strain, hypervirulent K. pneumoniae, different from classical strain related to the healthcare-associated Klebsiella infections. Diabetes mellitus is a significant risk factor. Reports of the disseminated infection due to hypervirulent Klebsiella are very few in Indian literature. We report the successful management of a diabetic patient with emphysematous liver abscess, brain abscess, and meningitis caused by hypervirulent K. pneumoniae infection.

Pyogenic liver abscess is usually polymicrobial and is often secondary to peritonitis or biliary tract disease. Monomicrobial liver abscess caused by Klebsiella pneumonia has increasingly being reported from the Asian population in the last two to three decades. K. pneumonia is a clinically important species implicated in community-acquired and healthcare-associated infections.1 Unlike the classical strain, which is often associated with nosocomial infection, the “hypervirulent” K. pneumoniae has emerged recently and reported predominantly from Southeast Asian countries but not from India.

The hypervirulent type is phenotypically and clinically distinct from the “classic” variant. This virulent strain causes a community-acquired pyogenic liver abscess and can disseminate to distant sites like the eyes, brain, and lungs.2 Unlike the classic variant, antibiotic-resistance is infrequent. Here, we report the successful management of a diabetic patient with K. pneumoniae associated emphysematous liver abscess complicated by meningitis and brain abscess.

A 48-year-old gentleman, car driver, presented with myalgia for 10 days, fever and jaundice for 4 days, and altered sensorium for a day. He was a known diabetic but with poor compliance. He had consumed alcohol almost daily for the past 10 years. His vitals were stable. He was icteric with liver palpable 6 cm below the costal margin. He was drowsy.

Laboratory reports revealed direct hyperbilirubinemia (total bilirubin—8.2 mg/dL, direct bilirubin—5.08 mg/dL) with transaminitis (aspartate aminotransferase—613 IU/L and alanine aminotransferase—441 IU/L). Neutrophilic leucocytosis was present. Blood sugar was 420 mg/dL. His glycated hemoglobin was 11.2%. Renal parameters were normal. The abdominal ultrasonography showed two hypoechoic lesions suggestive of liver abscesses, the largest measuring 7 × 5 cm. Contrast-enhanced computerized tomography (CT) scan of the abdomen suggested emphysematous transformation of the abscess with multiple gas pockets (Fig. 1A). He was initiated on ceftazidime and metronidazole empirically and later switched to meropenem as there was no clinical improvement. Aspirate showed blood mixed pus. On the third day of hospitalization, he was intubated due to worsening mental status and shifted to the intensive care unit (ICU).

A hypodense lesion was noted near the left corpus striatum in the CT brain (Fig. 1B). The same lesion showed ring enhancement and was consistent with brain abscess in magnetic resonance imaging(MRI) of the brain. The cerebrospinal fluid (CSF) analysis showed 24960/mm3 cells with neutrophilic pleocytosis (neutrophils—95%), protein—493 mg/dL, and glucose—11 mg/dL were compatible with acute bacterial meningitis, though the CSF culture was sterile. Both blood culture and the abscess grew K. pneumoniae. The colonies were hypermucoviscous, as evidenced by a positive string test which suggested hypervirulent Klebsiella. The organism was sensitive to ceftriaxone, amoxicillin-clavulanate, ciprofloxacin, gentamicin, and cotrimoxazole. Hence, the antibiotic was de-escalated to ceftriaxone which was continued for 42 days. Liver function improved with treatment. We did a tracheostomy on the second week of ICU admission and subsequently weaned off the ventilator. Subsequent blood cultures were sterile. There was a significant radiological improvement in both brain and liver abscesses (Fig. 2). His neurological condition improved slowly. He was able to follow simple commands during discharge. 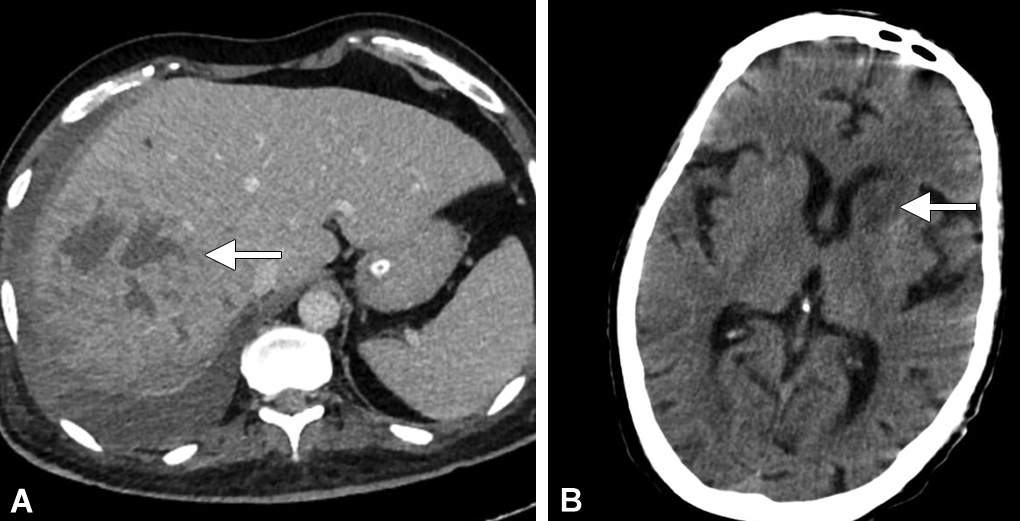 Biliary tract diseases, peritonitis, and bowel infections usually precede pyogenic liver abscess. In contrast, Klebsiella associated liver abscess is mostly cryptogenic and has no underlying biliary or bowel diseases, as seen in our case. Invasive disease is associated with poorly controlled diabetes mellitus. Excessive alcohol consumption also increases the risk of liver abscess.8 Our patient had both of the risk factors, diabetes and alcoholism.

Emphysematous liver abscess accounts for 6–24% of the bacterial liver abscesses.9 K. pneumoniae was the causative organism for 84% of emphysematous liver abscess in a study.10 It shows a fulminant course with mortality rate of 27–30%, as compared to 2–12% among patients with non-gas forming liver abscess. Drainage of abscess, appropriate antibiotics for 2–4 weeks, and strict glycemic control are the mainstays of management of pyogenic liver abscess.11 Patients should be considered for surgical intervention if the abscess is large, septate, multiple, or when percutaneous drainage fails.12

Brain abscess due to K. pneumoniae is less common, more debilitating, and seen with disseminated infection. Treatment requires antibiotics and surgical drainage if accessible. A prolonged antimicrobial course of 4–6 weeks is recommended.13 In our case, K. pneumoniae was isolated from both emphysematous liver abscess and blood. Brain abscess was not aspirated. Although CSF analysis was suggestive of pyogenic meningitis, the culture was sterile, probably because antibiotics were started before CSF sampling.

K. pneumoniae strain causing invasive diseases like liver abscess produces a “hypermucoviscous” polysaccharide capsule. Due to this, extreme stickiness of colonies is noticed in the form of a positive string test. Among 78 different capsular serotypes, K1, less commonly K2, serotypes produce this hypermucoviscous capsule.14 The serotyping of the capsule of K. pneumoniae could not be done in our case. However, we firmly believe that it could be an infection of community-acquired hypervirulent (hypermucoviscous) strain because of its occurrence in a diabetic without any abdominal disease, dissemination, and a positive string test in the culture plate.

Although the hypervirulent strain of K. pneumoniae causes pyogenic liver abscess, it remains sensitive to commonly used antibiotics. So early detection and treatment will reduce the morbid sequelae and mortality.

Community-acquired pyogenic liver abscess due to K. pneumoniae is probably on the rise among Asian countries. Clinicians should be aware of the emerging hypervirulent strain of K. pneumoniae which can cause liver abscess and disseminated disease. Early diagnosis and percutaneous drainage are the critical steps in management. Hypervirulent strain is not usually resistant to common antibiotics.