Objective: Intravenous thrombolysis within 4.5 hours from time of onset has proven benefit in stroke. Universal standard for the door-to-needle (DTN) time is within 60 minutes from the time of arrival of patients to the emergency department. Our rapid thrombolysis protocol (RTPr) was developed with an aim to reduce the DTN time to a minimum by modifying our stroke post-intervention processes.

Materials and methods: This before-and-after study was conducted at a single center on patients who received intravenous thrombolysis in the emergency department. Consecutive patients who were thrombolysed using our RTPr (post-intervention group) were compared to the pre-intervention group who were thrombolysed before the implementation of the protocol. The primary outcomes were DTN time, time to recovery, and modified ranking score (mRS) on discharge. Secondary outcomes were mortality, symptomatic intracerebral hemorrhage, and hospital and intensive care unit length of stay.

Conclusion: The RTPr can be adapted by clinicians and hospitals to bring down the DTN times and improve outcomes for stroke patients.

Our rapid thrombolysis protocol (RTPr) drastically reduces door-to-needle (DTN) times for thrombolysis in patients of acute stroke. Patients with DTN time <30 minutes had favorable outcomes in our study. We recommend clinicians to use our protocol to reduce DTN times for treating acute strokes.

Strokes are the second leading cause of death and third leading cause of disability across the globe.1 About 1.9 million neurons are lost every minute that an ischemic stroke is left untreated.2 Most effective therapy for acute ischemic stroke (AIS) has been intravenous thrombolysis, either as the sole post-intervention or in combination with endovascular thrombectomy.3–5 It is recommended that thrombolysis should be initiated within 60 minutes from the time of arrival to the emergency.6,7 One in six patients has a better disability outcome and 1 in 35 has a worse outcome when treated with tissue plasminogen activator (TPA) within the 3–4.5-hour window period.8 Every minute saved in reducing the onset-to-needle time that has been shown to add 1.8 days of extra healthy life to stroke patients.9 We developed our RTPr to reduce our DTN times to the minimum possible to attempt to provide the maximum benefit to patients suffering from acute ischemic stroke. The aim of our study was to investigate the impact of our RTPr on DTN times for thrombolysis and correlate it with neurological recovery. We also aimed to study the incidence of complications like mortality and symptomatic intracerebral hemorrhage (sICH). Limited data can be found regarding the impact of a stroke protocol in India.

This was an electronic health records (EHRs)-based before-and-after study which was approved by our institutional ethics committee. Consecutive patients with acute stroke were enrolled into the study and divided into groups. The pre-intervention group comprised of the patients who had presented with acute stroke and were subsequently thrombolysed in the emergency department (ED) before our RTPr was implemented. The post-intervention group comprised of patients who presented to the ED with acute stroke within the window period of 4.5 hours and were thrombolysed post-implementation of the RTPr. All patient details were accessed and collected through the hospital’s EHR. Time of onset of symptoms to needle time, DTN time of all patients along with National Institute of Health Stroke Scale (NIHSS) at the time of presentation, subsequent neurological recovery, and modified Rankin score (mRS) on discharge were recorded and analyzed. The standard mRS at 90 days was not considered as majority of patients in the both groups did not have follow-up records in the EHR. Secondly, total length of stay (LOS) at the hospital, intensive care unit (ICU) LOS, and incidence of sICH were also studied. sICH was defined as any deterioration in NIHSS score or death within 7 days combined with intracerebral hemorrhage of any type (including petechial) on any posttreatment imaging after the start of thrombolysis (National Institute of Neurological Disorders and Stroke definition).10

The study was conducted in the emergency department of a 400-bedded Indian urban tertiary care center.

All patients who presented to ED with acute ischemic stroke and were subsequently thrombolysed were included in the study.

The study intervention constituted of conceptualization, development, and implementation of our in-house RTPr. Table 1 compares the RTPr with our previous stroke protocol. It focused on a multispecialty approach to reduce the DTN times for stroke patients arriving to our emergency.

Patients arriving in the triaging area with symptoms of stroke are informed to the senior emergency physician in the ED by triage nurse. If we have prehospital information regarding a stroke patient arriving, a green corridor is established from triage to radiology. Counseling of family members regarding the condition, diagnosis, and probable need for thrombolysis by the doctor is performed in the ambulance, and live locations are shared with the emergency medicine team. The vital signs of the patient are recorded by our trained triage nurse, while the physicians quickly evaluate the patient in the triage room itself. On confirmation of clinical stroke, a “stroke code” is announced by dialing the emergency code. The calls are received by the neurologist on call, radiology, laboratory, and medical administration. The patient is immediately shifted to radiology for computed tomography (CT) brain or magnetic resonance imaging (MRI) screening (diffusion-weighted and fluid attenuated inversion recovery). MRI is performed for patients who have wake up strokes, and exact time of onset is not known or when symptoms/signs are vague. If MRI is contraindicated and a radiological diagnosis is required, then a CT perfusion study is performed. When the patient is in the CT, the family is re-counseled regarding the clinical diagnosis, condition, and probable need for thrombolysis and consent for the same is obtained. Contraindications are ruled out during the scan. Recombinant tissue plasminogen activator (rTPA) is brought to radiology by the emergency nurse to save time if thrombolysis is indicated. If CT is normal and clinical diagnosis of ischemic stroke established, the patient is delivered the bolus dose followed by the infusion over 1 hour. All stroke blood samples are sent before giving the bolus drug. The neurologist then takes the call for the need for additional CT angiography in which case the infusion is continued in the scanner. The patient is then shifted back to the emergency where the emergency physician and nurse monitor the patient’s hemodynamics and neurological recovery/worsening. An emergency physician consultant stays with the patient throughout starting from the triage till the patient gets thrombolysed. This minimizes the risk of any delays that may occur in the thrombolysis of the patient. The neurology team decides the need for mechanical thrombectomy, and the patient is shifted to the stroke ICU.

Statistical analysis was conducted using IBM SPSS version 22. Continuous variables were presented as mean and categorical variables as frequency and percentage. Multivariate analysis techniques have been used to determine the neurological recovery basis and the DTN time. Correlation between DTN time and related outcomes was calculated basis the Chi-square test. Other suitable statistical analysis methods were adopted to calculate the outcomes of the research study. 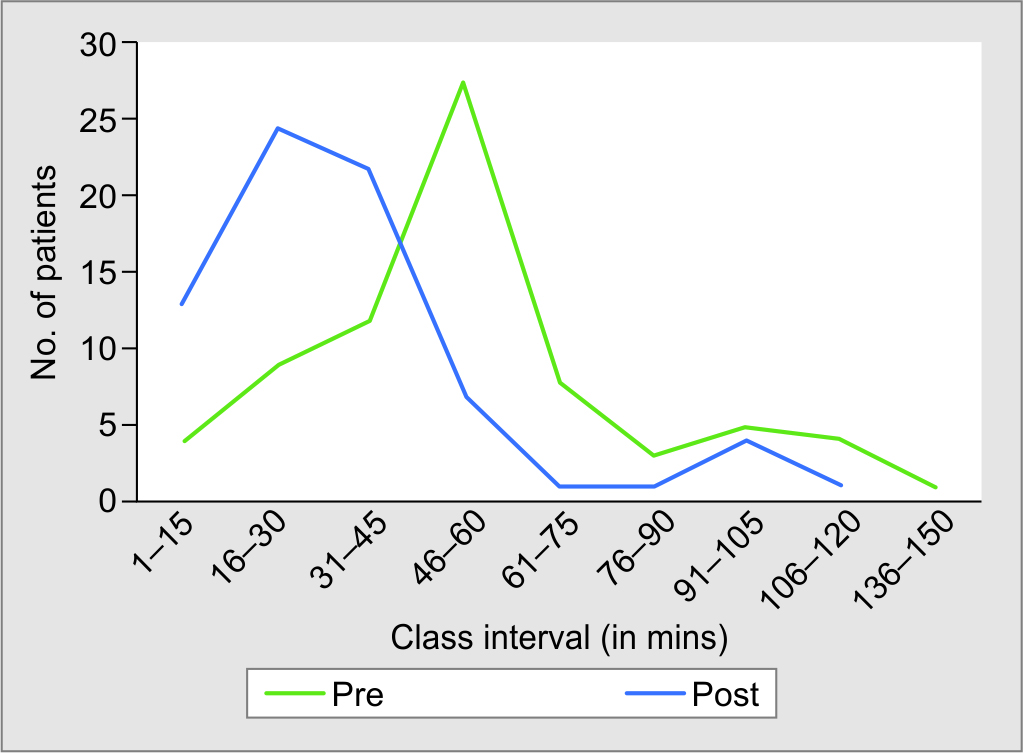 It is well known that the benefit of intravenous thrombolysis in acute stroke is time-dependent. A DTN time of ≤60 minutes is the internationally recognized guideline.12 Studies have shown that despite guidelines, only one in three stroke patients receive intravenous thrombolysis. There have been strategies implemented in different healthcare settings across the world to shorten DTN times well below the recommended 60 minutes. Heikkilä et al. demonstrated that the DTN time could be brought down to a median time of 20 minutes.13 Similarly, Zinkstok et al. brought down the average DTN time to less than 30 minutes after implementing their ABC protocol.11 Our study found that by using our protocol, the mean DTN time was reduced by 22 minutes with the fastest DTN being 6 minutes. Reducing the DTN times have been shown to improve outcomes (mRS ≤2) in more patients than otherwise.14 In our study, more patients were discharged with an mRS of 0–2, when the RTPr was used. Patients who received thrombolysis within 30 minutes had a higher probability of a favorable outcome (mRS ≤2) at discharge than those thrombolysed beyond 30 minutes. Kim et al., in their study, did not find any changes in the mRS of patients discharged, but DTN times were significantly reduced.15 There was no difference in the number of patients who had neurological recovery within 24 hours of thrombolysis between the two groups. But, in both the groups, majority of patients who had neurological recovery within 24 hours had a DTN ≤30 minutes. On the other hand, most of the patients who did not have neurological recovery were thrombolysed beyond 30 minutes. There was no statistical difference in the ICU and hospital LOS and incidence of sICH in both the groups. Traditionally, the onset of symptom to treatment time was 3 hours. This window has now been extended up to 4.5 hours. The European Cooperative Acute Stroke Study (ECASS) group demonstrated in their study that intravenous alteplase can be safely administered to patients with an extended window period of 4.5 hours.16 In our study, the median onset-to-treatment times was reduced from 150 to 113.5 minutes.

About 10.81 and 9.46% patients in the pre-intervention and post-intervention groups, respectively, underwent endovascular mechanical thrombectomy post-thrombolysis. Studies have shown EVT in addition to thrombolysis to have beneficial effects on patients when onset-to-treatment times are minimized.17 Through multiple randomized controlled trials, it has been established that the combination of medical thrombolysis and EVT for large vessel occlusions is a superior treatment regimen as compared to thrombolysis alone when initiated within 6 hours of symptom onset.18 Patients who go to sleep with no neurological symptoms and wake up with deficits pose a unique dilemma in the management strategies. The “wake-up strokes” have an incidence rate of about 15–25% of all AIS patients.19 Recent studies have established that the window period for EVT can be extended up to 16–24 hours. The selection is based on imaging which shows a salvageable penumbra or a mismatch between neurological deficit and size of infarct. This is beneficial for patients who suffer from “wake-up” strokes and may not be a candidate for thrombolytic therapy.20,21

“Stroke codes” globally have shown to maximize the number of patients receiving thrombolysis and shortening the DTN times.13,22–24 Our protocol incorporated the code stroke concept and factored in the EMS, triage nurse/physician, ancillary specialties, and administration. Since the lead was with the ED, all staff members were educated and trained regarding importance of stroke, early initiation, and ownership of the patient. Radiology department was primed that code stroke patients would be the top priority and no other patient should be taken into the scanner before the stroke patient. Work space optimization, education, training, cooperation, reorganizing processes, and protocols can help improve the capacity efficiency of the ED to provide the best standard of care to patients suffering from acute ischemic strokes.25–28 We took all these factors into consideration while preparing our protocol.

The major limitation of our study was the sample size. Our electronic health records were introduced in 2017 and the RTPr in 2018. Thus, we had only few electronic records of patients before the implementation of RTPr. To avoid confounding, we selected the same number of consecutive patients who were thrombolysed post the implementation of our protocol. If we would have taken all the patients thrombolysed since our new protocol, the results may have been different. Another limitation was that this was a single center study and our protocol will need validation in bigger multicentric studies. Since our study was quasi-experimental, there was risk of unidentified confounding and bias.

In our study, we found that patients who were thrombolysed within 30 minutes had better and favorable outcomes. We recommend clinicians to aspire to achieve a DTN of ≤30 minutes than the much accepted 60 minutes for acute stroke patients. The RTPr brings down the DTN time substantially for patients of acute ischemic stroke safely. This study showed better outcomes for patients who were thrombolysed using our protocol. The RTPr is a useful tool which can be adapted to bring down the DTN time and improve outcomes for stroke patients. We do recommend larger multicentric studies to validate the RTPr.